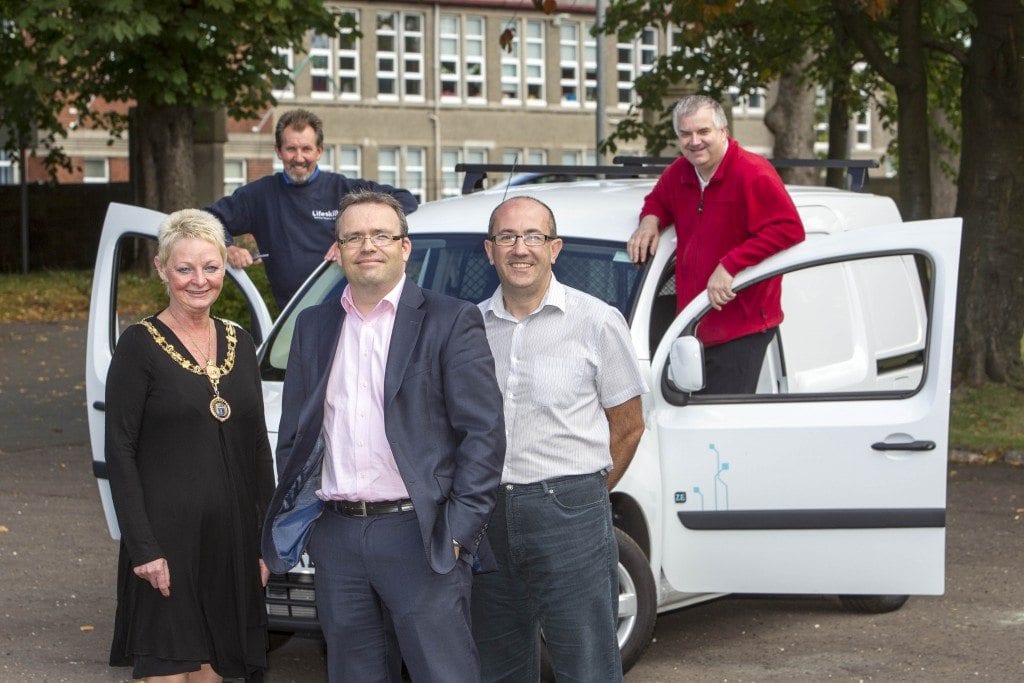 A charity which provides support for people with mental ill health in Renfrewshire has hit the streets in a new electric van thanks to the Glasgow Airport FlightPath Fund.

RAMH, formerly known as Renfrewshire Association for Mental Health, supports clients to maintain their tenancy or to re-settle in a new tenancy and maintain a safe and comfortable home through its Lifeskills programme.

The £10,000 cost of the new vehicle has been met by the Glasgow Airport FlightPath Fund and the Clothworkers’ Foundation with each providing half.

It will allow RAMH to continue providing vital services such as gardening, painting, carpet fitting and delivering furniture and other household items all over Renfrewshire. As the van is carbon neutral it will also result in a significant reduction in the charity’s carbon footprint.

Lifeskills has two distinct services, both of which operate by referral. Lifeskills Tenancy Support is a handyman service providing practical support and assistance with small repairs and DIY tasks like joinery, flat pack assembly and electrical jobs.

Lifeskills Furniture Re-use collects unwanted furniture and redistributes it to referral clients, providing a lifeline for those relocating on a limited budget. Goods that are commonly given a new home by RAMH include furniture such as sofas, suites, beds and bedding, electrical items and kitchenware.

John McConnell, head of commercial at Glasgow Airport, said: “RAMH clearly provides fantastic support for people in Renfrewshire who suffer from mental ill health through its Lifeskills programme, and key to maintaining that support is finding an affordable way for staff and volunteers to carry out these visits to people in the community every day.

“As a business which takes our environmental responsibilities very seriously, we are also keen to support RAMH in its efforts to reduce its carbon footprint. The electric van is carbon neutral and cheap to run, which makes it ideal for the type of short journeys on urban roads that it will be used for.”

Stephen McLellan, RAMH Chief Executive, said: “We are very grateful to Glasgow Airport for recognising the importance of increasing tenancy sustainment and supporting our efforts to increase it through this award. It is well known that providing furniture to tenants in need, and carrying out odd jobs in the earlier stages of a tenancy, are effective ways of increasing tenancy sustainment.

“Research has shown that where 25% of all homeless lets failed within the first twelve months, this figure reduced to 14% if furniture was provided. This is a staggering 44% reduction in the number of failed tenancies and this van is crucial if we are to maintain the services we provide through the Lifeskills programme.”

Renfrewshire’s Provost Anne Hall said: “RAMH is one of the four charitable organisations that I am supporting and promoting during my time as Provost of Renfrewshire. It has a  strong track record of providing practical support for people in communities across Renfrewshire. This generous funding from the Glasgow Airport FlightPath Fund will help RAMH take forward a programme which is already delivering very positive results.”

Glasgow News? Daily Updates part of our network
Top local talent to go head to head on The Spree stage