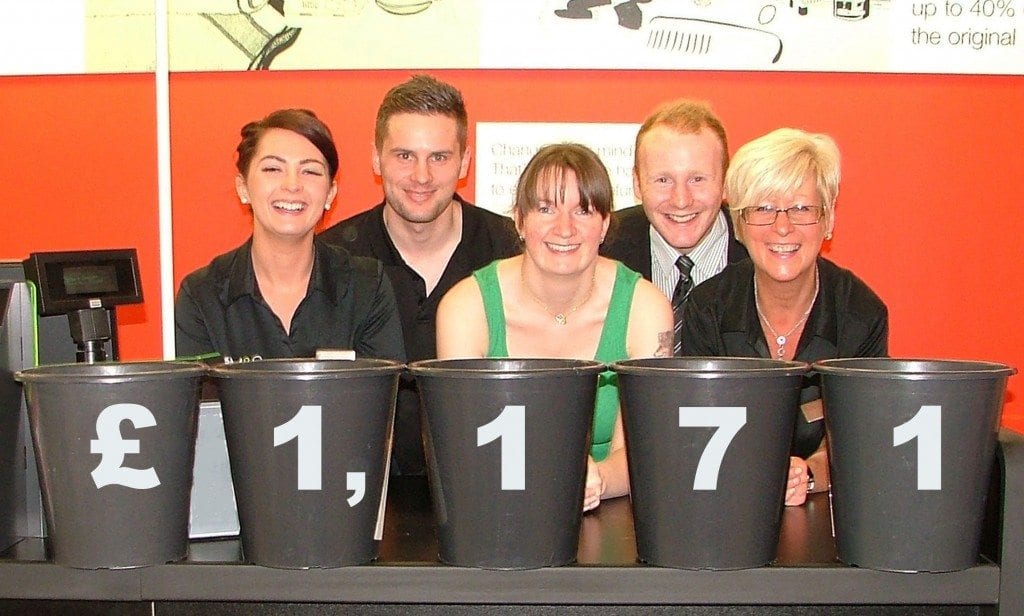 BIG-HEARTED shoppers in Paisley town centre rallied round in their usual generous fashion to support a worthy cause.

Caring staff at the busy Marks and Spencer store in the High Street were so dismayed when they learned five families had lost everything after fire gutted their homes, they organised a bucket collection to raise money to help the victims. The George Bar and flats in Causeyside Street, Paisley were destroyed in the blaze that broke out in the early hours of Sunday, February 24 leaving 24 people homeless. What remained of the building had to be demolished.

A team of fundraisers at the popular store organised buckets to be set up at the check-outs where customers could donate their loose change and it wasn’t long before they got the backing of Buddies.

Now a cheque for  £1,171 to be split among the families who lost their homes has been collected by young mum, Karen McAvoy who was left with nothing after the fire. Karen, 30, said: “It is quite incredible that complete strangers would want to help in this way. Everyone lost everything that night and I know I speak on behalf of all the families when I say we are really grateful for this donation.

“I had no idea at all that this was happening and it was very kind of people to think about those who lost so much when the fire broke out.

“I would like to thank all those involved at Marks and Spencer and all the customers who donated when they were shopping in the store. It really is appreciated and will mean so much to those who not only lost their homes but everything in them too.

“I cannot thank everyone enough and will use my share to buy a few bits and pieces for my new place.”

Karen told how she had just gone on holiday to Spain with her seven-year-old son, Connor the day before and was devastated when she got a call from home to say there had been a fire at the property.

She said:”I called the police at Mill Street and asked them to make sure my front door was secure until we got back to Paisley. What I didn’t realise at the time that all that was left was my front door and there was nothing else left to secure.

“Everything was gone. We had lost it all. I started to Google what had happened and quickly realised it was more serious that I could ever have imagined. We decided to stay for the rest of our break so I had a few days before I had to deal with the reality of it all.

“This donation is so welcome and will be a nice boost for all those concerned.”

Joyce Kirk, manageress at M&S, in Paisley High Street, said: “The staff who took this fund raising effort on board voluntarily were terrific in organising this collection and they tell me the response from the public was magnificent.

“It was a real team effort from everyone who helped set up the collection and those who shop in our store in Paisley. So it is well done to all.”

Mark Macmillan, leader of Renfrewshire Council and chairman of Paisley Vision Board, said: “Paisley means many things to many people, but no one can deny that Paisley Is…a caring place.

“Our town centre stores always play a huge role in supporting those causes which affect the lives of people in Paisley and elsewhere in Renfrewshire. It is testimony to the hard work of the staff at Marks and Spencer and the generosity of their customers that such an excellent sum of money was raised for those families who lost so much in the George Street fire.”

Start spreading the news, The Rat Pack is Back…again!
Scroll to top
Go to mobile version