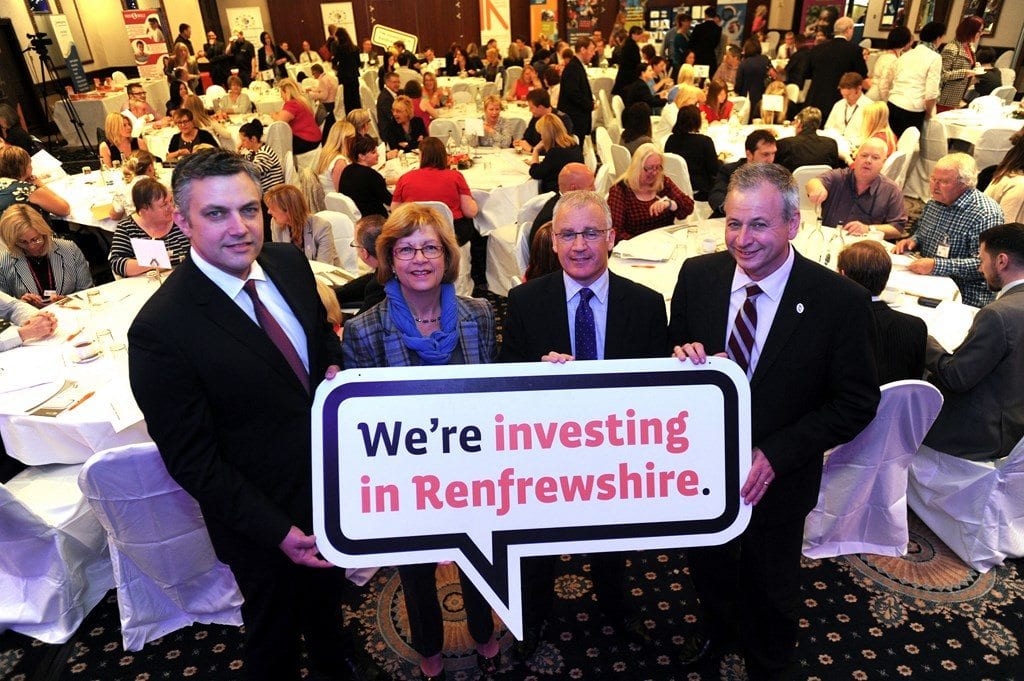 Jobs staff mark year of success for Invest in Renfrewshire

Employment professionals travelled from across Scotland to hail the first year of an £8m council-run programme to boost Renfrewshire’s economy and support youth employment.

Around 250 delegates gathered in Renfrew’s Normandy Hotel as the flagship Invest in Renfrewshire programme marked its anniversary with an employability conference.

The conference was opened by Renfrewshire Council Leader Mark Macmillan, who talked about the successes of Invest over the past year.

Visitors heard young people and businesses who have taken part in the programme talk about how it has benefited them.

They also heard from a variety of other speakers, who covered updates on national and local employment initiatives and issues, including welfare reform.

Organisations represented on the day included Renfrewshire Council, JobCentre Plus, Skills Development Scotland and the Department of Work and Pensions.

Councillor Macmillan said: “Creating jobs and growing the economy are big priorities for the council and Invest in Renfrewshire sees us making a sizable financial commitment to both.

“The twin aims of the programme are to help young people into jobs and to assist local businesses to grow.

“It was great to hear some of the stories on the day from young people whose lives have been transformed by the opportunities they have been given, and from businesses who have been boosted by the council’s financial support.

“It was also good to use the first birthday of Invest as a chance to gather together employment professionals and let them share ideas about their work.

“I hope they found the day useful and we look forward to continuing to work with partner agencies to create job opportunities for young people in Renfrewshire.”

The previous night, a networking event was held for businesses who have taken part in Invest in Renfrewshire, also at the Normandy Hotel.

On the night, Councillor Macmillan announced that an extra £750,000 funding had been secured by the council for Employer Recruitment Incentives.

Through Invest, the council will pay up to half the wage costs of a young person aged between 16 and 24, with an extra £1,000 for businesses which agree to pay at least the Living Wage of £7.50 per hour.

Other funding available through Invest in Renfrewshire includes money for graduate internships, business development grants, and a retail improvement scheme.

For more info on what Invest in Renfrewshire could do for you, call 0300 3000 144, visit www.investinrenfrewshire.com, or email invest@renfrewshire.gov.uk

Glasgow News? Daily Updates part of our network
Vision of the future as Arnotts images revealed