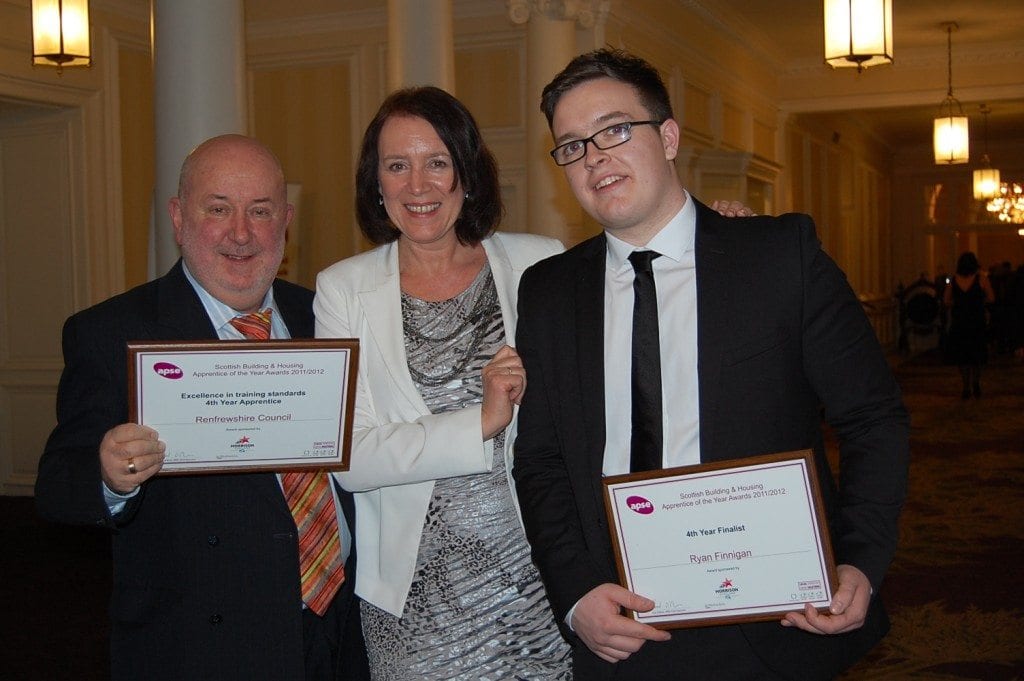 Apprentice Ryan is building his career

A Renfrewshire Council apprentice is building for a bright future after reaching the final of a prestigious public-sector award.

Ryan Finnigan, who works as a joiner with the council’s Building Services department, was nominated for the Association of Public Sector Excellence apprentice of the year awards.

He was one of three finalists in the fourth-year apprentice award category and although he didn’t win, judges at the event said it was a close call. As a finalist, Ryan faced a grilling from three industry experts about various aspects of the job and also took part in a test of his practical skills, for which he received the rare mark of 100%.

The APSE Building and Housing Scotland awards were held in the Peebles Hydro.

Councillor Williams said: “We are delighted and proud that Ryan was honoured in this way, as he has shown dedication and talent.

“I would like to congratulate him on reaching the final and I am sure he has a bright future ahead of him.

“The council runs programmes for both office and craft-based apprenticeships, lasting for three to four years and covering a variety of trades.

“These are an ideal way for young people to pick up the skills and knowledge they need for their chosen career, with all the advantages of access to training and the support of experienced colleagues.”

Ryan, who was kept on by the council when his apprenticeship finished last year, said: “I was delighted to make it to the final.

“The council has been a great place to work, the training has been good, and it offers job security. I would definitely recommend an apprenticeship to other young people.”

Ryan has also worked with colleagues in the council to become an ambassador for a trade career, visiting high schools across Renfrewshire to talk about the benefits of becoming an apprentice.

Currently, Building Services have nine first-year apprentices across various trades, with recruitment for the 2013 intake set to start in April.

To apply for a craft apprenticeship with Renfrewshire Council, visit the www.myjobscotland.gov.uk website.

For more information on apprenticeships, visit www.renfrewshire.gov.uk or call 0141 618 7287.

Book your place at the Contract Clinic for a free contract assessment.

Council projects are honoured at COSLA Awards
Scroll to top