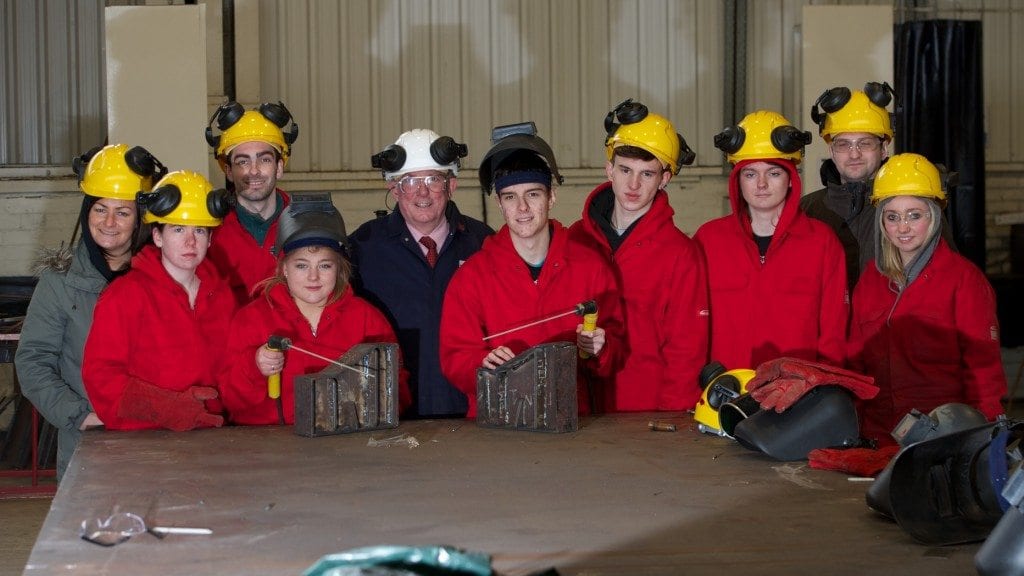 Sparks were flying for Renfrewshire’s latest batch of Recruits when they paid a week-long visit to a local engineering firm.

The teenagers on the popular youth employability scheme were given a welding masterclass by staff at Steel Engineering in Renfrew.

The Recruit is a council-run programme loosely based on TV favourite The Apprentice, where young people take part in a series of challenges, with jobs on offer for the winners.

Currently, there are two editions of the scheme, set to run until March – one for school leavers aged 16 to 17 and one for unemployed young people aged 18 to 24.

The younger set of Recruits were given a tour of Steel’s site at Westway Park, and were trained in how to operate some of the equipment in the workshop.

And some of the youngsters put their new-found skills to good use, welding together some scrap metal to make a creation they called Robbie the Recruit Robot!

Two of the youngsters – Connor Barr, 17, and Skye Donnelly, 16, both of Paisley – were judged as the best-performing Recruits over the week.

Councillor Roy Glen, Convener of Renfrewshire Council’s Economy and Jobs Policy Board, added: “Tackling youth employment is one of the council’s top priorities.

“This is why we have included an extra £4.5million to support jobs and the economy in the most recent council budget.

“The Recruit is a key part of our strategy to help equip young people for work and has gone from strength to strength over the few years it has been in operation.

“As always, we are grateful to local companies such as Steel Engineering, who give up their time to give the Recruits an insight into their work.”

Peter Breslin, managing director of Steel Engineering, said: “We were delighted to sign up for The Recruit.

“The engineering and renewable energy sectors offer wonderful career opportunities and The Recruit gives young people the change to experience real work environments and see what is involved.

“As an Investor in People company, we are extremely passionate about supporting youth employment initiatives and firmly believe in giving young people every opportunity to flourish within our expanding business.

“We are committed to providing top-quality training through our renewable energy training academy, TRESTA, and also employ 34 modern apprentices from our base at Westway Park.”

Steel Engineering is one of Scotland’s leading engineering companies, with a long-established base in Renfrewshire.

The company has developed a solid reputation within the expanding renewable-energy sector with a range of major contracts.