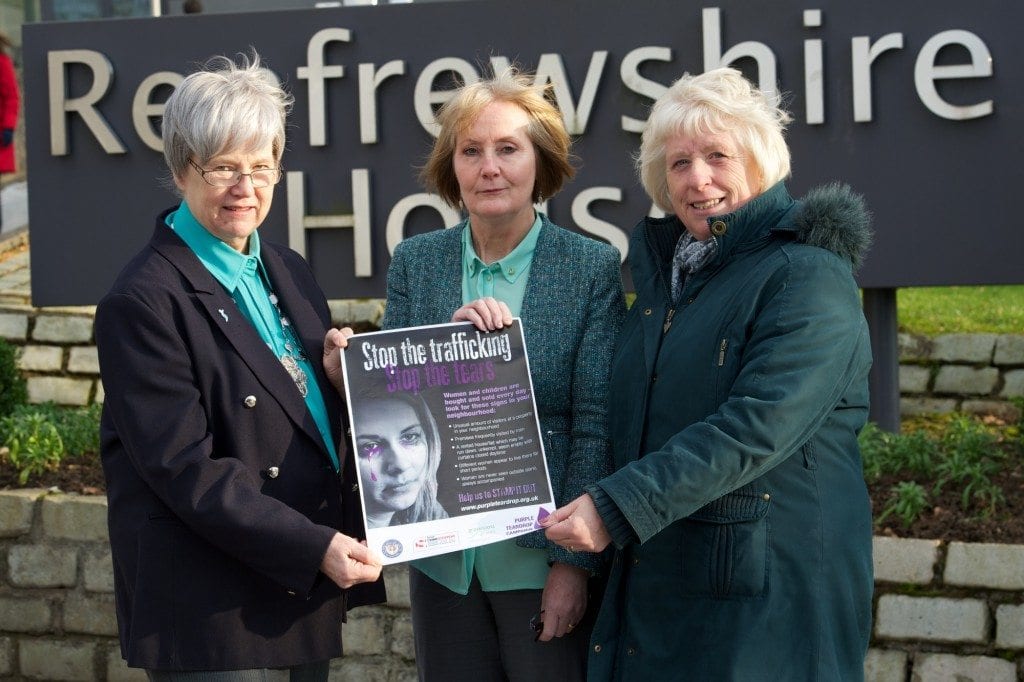 Renfrewshire Council is throwing its weight behind the Purple Teardrop Campaign designed to stop women and girls being sold into sexual slavery by human traffickers.

The campaign is being run by Soroptimist International, a world-wide women’s organisation which works to improve the lives of women and girls.

Renfrewshire Council is displaying the powerful Purple Teardrop Campaign posters in all its buildings. The posters list the warning signs which could show a house or flat is being used by human traffickers, and the Crimestoppers number. Mrs Ramsay said, “We are greatly indebted to Renfrewshire Council for its continuing support and we hope other local authorities will follow its example in backing the Purple Teardrop Campaign.”

Jean Ramsay, Programme Action Officer of the Paisley Soroptimists, said, “Human trafficking is a global problem that affects millions of people across the world. But it isn’t something that just happens somewhere else. It happens here too. We want people to open their eyes and act.

“One overriding factor in the growth of trafficking is the fundamental belief that the lives of women and girls are expendable. In societies where women and girls are undervalued or not valued at all, women are at greater risk of being abused, trafficked and forced into sex slavery.

“Our message is, ‘Don’t shut your eyes, don’t turn your back on someone who needs help. Call Crimestoppers if you see something suspicious.’”

Councillor Maureen Sharkey, Renfrewshire Council’s representative on the Renfrewshire Women’s Association, said, “Slavery was supposedly abolished in Britain in 1807 but the recent case in Rochdale shows the horrific truth that it is thriving 200 years later.

“Victims are becoming younger and younger with girls as young as 11 being sold into slavery and forced to have sex with up to 30 men a day.

“Getting the evidence to prosecute traffickers can be very difficult. They control their victims with torture, fear and threats against their families. That is why it is so important for the public to be aware of what is going on and to report anything suspicious.”

Renfrewshire Council’s social work service already works closely with Strathclyde Police and the UK Border Agency to identify and assist victims of child trafficking who may be using Glasgow Airport as their gateway into the UK.

Human trafficking is a global problem but children and young people are being groomed for sexual exploitation and trafficking within the UK as well. There have been a number of cases where teenage girls, born in the UK have been trafficked between towns and cities.

The girls were groomed and lured away from their families by networks of boys and men using tactics similar to those used by child sex offenders.

Warning signs:
*       Physical symptoms (bruising indicating either physical or sexual assault)
*       Sexually transmitted diseases or unplanned pregnancy
*       Evidence of drug or alcohol misuse
*       Phone calls or texts from adults outside their normal group of friends
*       Adults hanging around outside the child or young person’s home
*       Significantly older boyfriend
*       Persistently going missing, staying out overnight or returning late with no explanation
*       Returning home after having been missing, looking well despite having no place to stay
*       Going missing for long periods with no place to stay
*       Having a lot of money, expensive clothes or mobile phones without being able to explain where they’ve come from
*       Having keys to properties that you don’t recognise
*       Low self-image, low self-esteem, self-harming behaviour including cutting, overdosing, eating disorder
*       Playing truant
*       Getting into or out of cars driven by adults you don’t know
*       Going missing and being found in places where the child or young person has no known links.

A property may be being used by traffickers if:
*       A lot of different men often visit
*       Different women seem to live there for short periods
*       Women are never seen outside alone, a man is always with them.