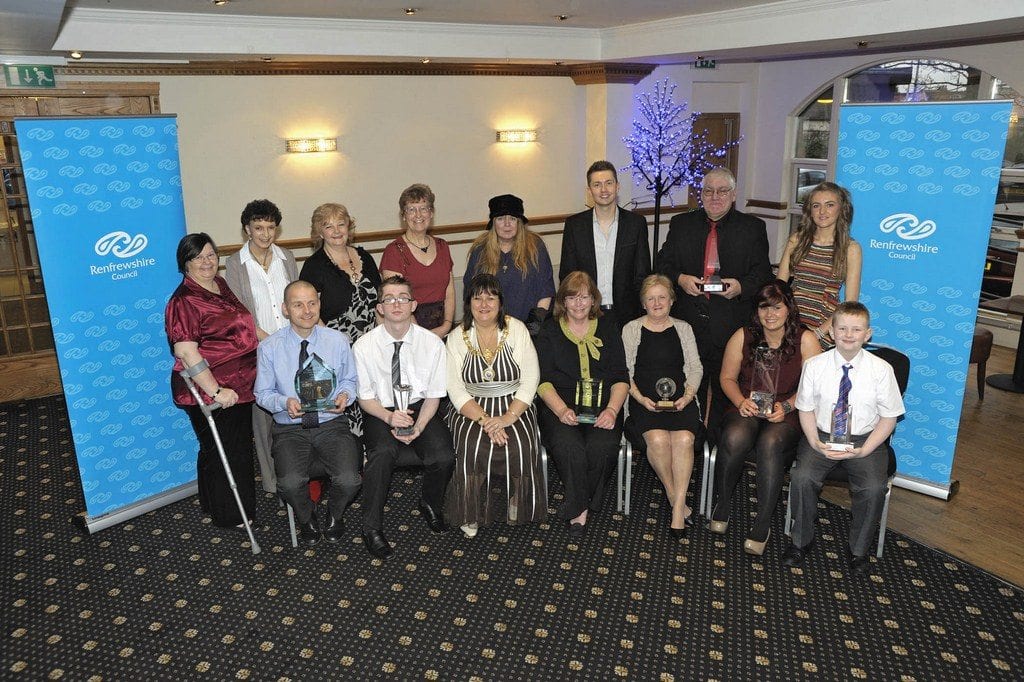 Renfrewshire’s unsung heroes have been honoured at the 2012 Provost’s Community Awards.

The awards, now in their 14th year, were also the last to be hosted by Provost Lawson before she steps down in May.

Provost Lawson said: “The Provost’s Community Awards are always a very special occasion and this year was particularly special for me as it was my last time hosting the awards.

“It is one of my favourite jobs as Provost to be able to host this event and pay tribute to the many people who make such worthwhile contributions to our communities and overcome significant personal difficulties and tragedies at the same time. All the winners and nominees were fantastic and an inspiration to others. I’d like to congratulate them all, as well as the sponsors, without whom the awards wouldn’t be possible.”

Sean Batty said: “Being from Renfrewshire myself, it is a great pleasure for me to be able to join the Provost in honouring these local residents for all their achievements and contributions to the community. It’s always really inspiring and a really great, positive event. The winners, and nominees, are all very deserving and I really enjoyed meeting them and hearing their stories. It’s also been a pleasure to work closely with Provost Lawson on this and several other community events over the past few years and would also congratulate her on her huge contribution to the community as well.”

Renfrewshire Council Leader Brian Lawson also spoke at the event to congratulate Provost Lawson on all her work over the past five years.

He said: “The Provost’s Community Awards have become one of the key community events in Renfrewshire over the past 14 years and have grown under Provost Lawson to incorporate awards that recognise local achievements in Fairtrade and Arts and Culture. She has always been a huge supporter of the community and local charities and will be sadly missed as Provost. So as well as all very deserving winners and nominees, it’s also fitting to congratulate the Provost.”