Players in the Beat the Street Renfrewshire game can clock up double points this week by leaving the car at home.

From Wednesday, 29th September, this week is ‘Go Travel’ week where people are encouraged to think about walking or cycling to work or school rather than taking the car, with double points on offer during traditional commuting hours. 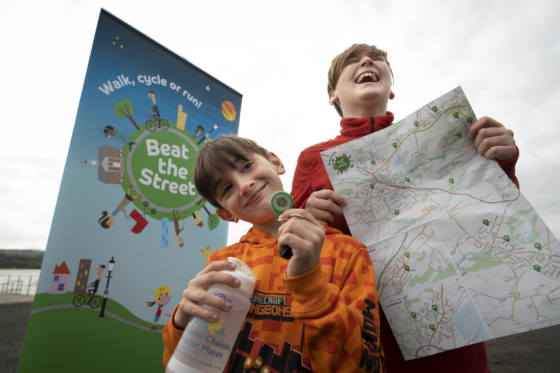 Taking place until Wednesday 27 October, Beat the Street has transformed the towns and villages of Bridge of Weir, Elderslie, Houston, Howwood, Kilbarchan, Linwood, Johnstone and Lochwinnoch into a real-life game with players tapping special sensors called Beat Boxes dotted across the area.

The free physical activity game encourages players of all ages to get active and to ditch the car, and walk, scoot, wheel, cycle or run instead.

Participants in Beat the Street Renfrewshire have already racked up 26,300 miles and more than 5,630 people have signed up to take part and it’s not too late to get involved.

There are total and average points leaderboards for schools, community teams and charities with vouchers for the teams that travel the furthest, plus you can help chosen charity MND Scotland get a potential donation of £500!

Vhari Duncan, Principal Teacher, Bridge of Weir Primary School, said: “Families at Bridge of Weir Primary are loving taking part in Beat the Street, especially on their walk to and from school. We have been using our brand-new social media accounts to motivate children and to keep families up to date with how we are rating on the leaderboard!”

Councillor Cathy McEwan, Convener of Renfrewshire Council’s Infrastructure, Land and Environment Policy Board, said: “We are really enjoying seeing people getting out and playing the game. It’s great to see people of all ages making the most of the chance to get outdoors and doing their best to leave the car at home wherever possible.

“Keep getting involved over the next few weeks for the chance to win prizes and to raise money for the Provost’s chosen charity MND Scotland.”

Glasgow News? Daily Updates part of our network
How to Protect Your Business from Phone Scams