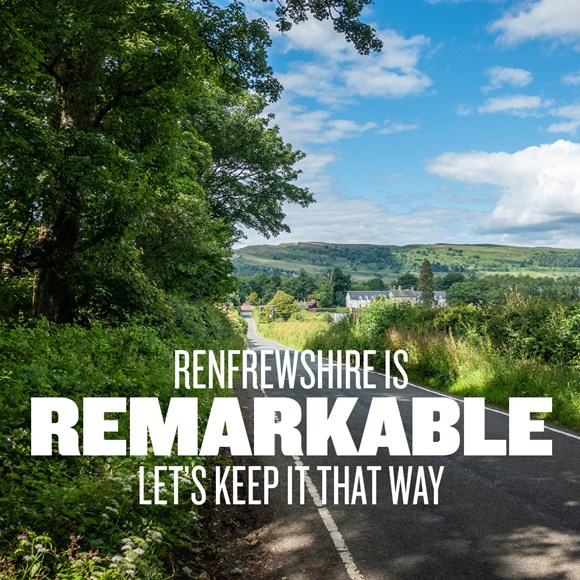 Renfrewshire Council has joined forces with Zero Waste Scotland to promote their anti-littering campaign, Scotland is Stunning – Let’s Keep It That Way.

Highlighting the beauty of Scotland’s lochs and mountains, city parks and country woodlands, the campaign is backed by the Scottish Government and Keep Scotland Beautiful and aims to inspire people to enjoy the great outdoors, but without leaving litter behind.

The campaign aligns closely with Renfrewshire’s award-winning Team Up to Clean Up campaign which has seen thousands of local people tidying their communities and has created a dedicated community of like-minded volunteers.

Councillor Cathy McEwan, Convener of Renfrewshire Council’s Infrastructure, Land and Environment Policy Board, said: “We’re delighted to continue our work with Zero Waste Scotland by promoting this campaign as we want to ensure that Renfrewshire remains a beautiful place to live, work and visit.

“Our own Team Up to Clean Up campaign has the same values and we’ve been delighted to see its success as local people come together to make a real difference to our communities.

“Renfrewshire really is remarkable so please, let’s work together to eradicate littering and take pride in where we live.”

As well as being an eyesore, dropping litter is a criminal offence. Discarded waste can also be a danger to young children and animals, and it is estimated that 80% of marine litter washing up on our beaches started out on land.

Iain Gulland, Zero Waste Scotland chief executive, said: “People are understandably keen to enjoy everything Scotland has to offer this summer, and onwards. If you are camping, exercising, having a barbecue or just enjoying the scenery, have fun, but remember to bin what you don’t need or take it with you.

“I’m delighted Renfrewshire Council is getting involved in our campaign. Go home with happy memories and leave Renfrewshire litter-free so others can do the same. We know Scotland is stunning, let’s keep it that way!”

The campaign can be followed on social media using the hashtag #BinYourLitter and volunteers are encouraged to post their pictures of beautiful scenery in their area, as well as their efforts to keep it tidy.

Barry Fisher, CEO of Keep Scotland Beautiful, added: “We welcome this new campaign highlighting the beauty of Scotland and all it has to offer. Litter levels across Scotland are unacceptable, and in many places are getting much worse. Alongside this campaign we will continue to offer support to all those who have already stepped up to tackle this problem in their own communities with litter clean ups and projects to improve and protect the places they care about.”

For community groups and other local organisations keen to spread the message, a free downloadable campaign toolkit is available online at www.managingourwaste.scot/litter and for more information on the Team Up to Clean Up campaign, visit www.renfrewshire.gov.uk/TeamUptoCleanUp.