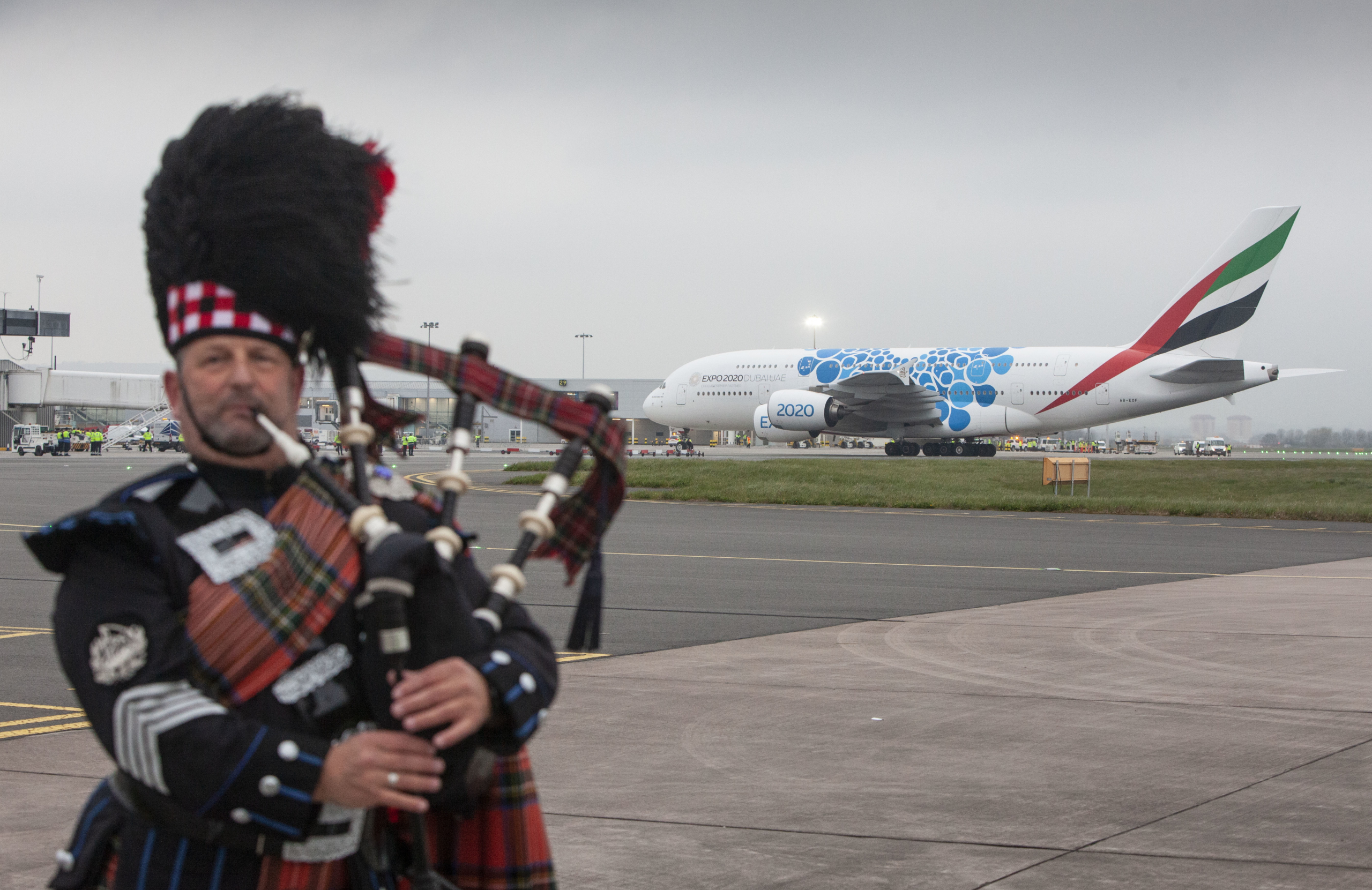 Airline partner Emirates has confirmed that the world’s largest commercial passenger aircraft will return to Glasgow in 2020.

The huge double-decker aircraft, which has a wingspan of almost 80 meters and can carry over 500 passengers, will return to the airline’s popular Glasgow-Dubai route from March.

Emirates plan to operate the iconic A380 on a year-round basis on the double daily service, Scotland’s busiest long-haul route. One of the airline’s Boeing 777 aircraft fleet will continue to be used on the route.

Mark Johnston, Managing Director at Glasgow Airport, said: “Emirates’ decision to operate a year-round daily service using the Airbus A380 is tremendous news and underlines the airline’s continued commitment to Glasgow Airport and its passengers.

“We invested significantly in our international pier infrastructure to vastly improve the experience for our long-haul carriers and passengers last year. This included the building of Scotland’s first and only triple airbridge, which not only supports a wide range of aircraft types but is perfect for servicing the A380. 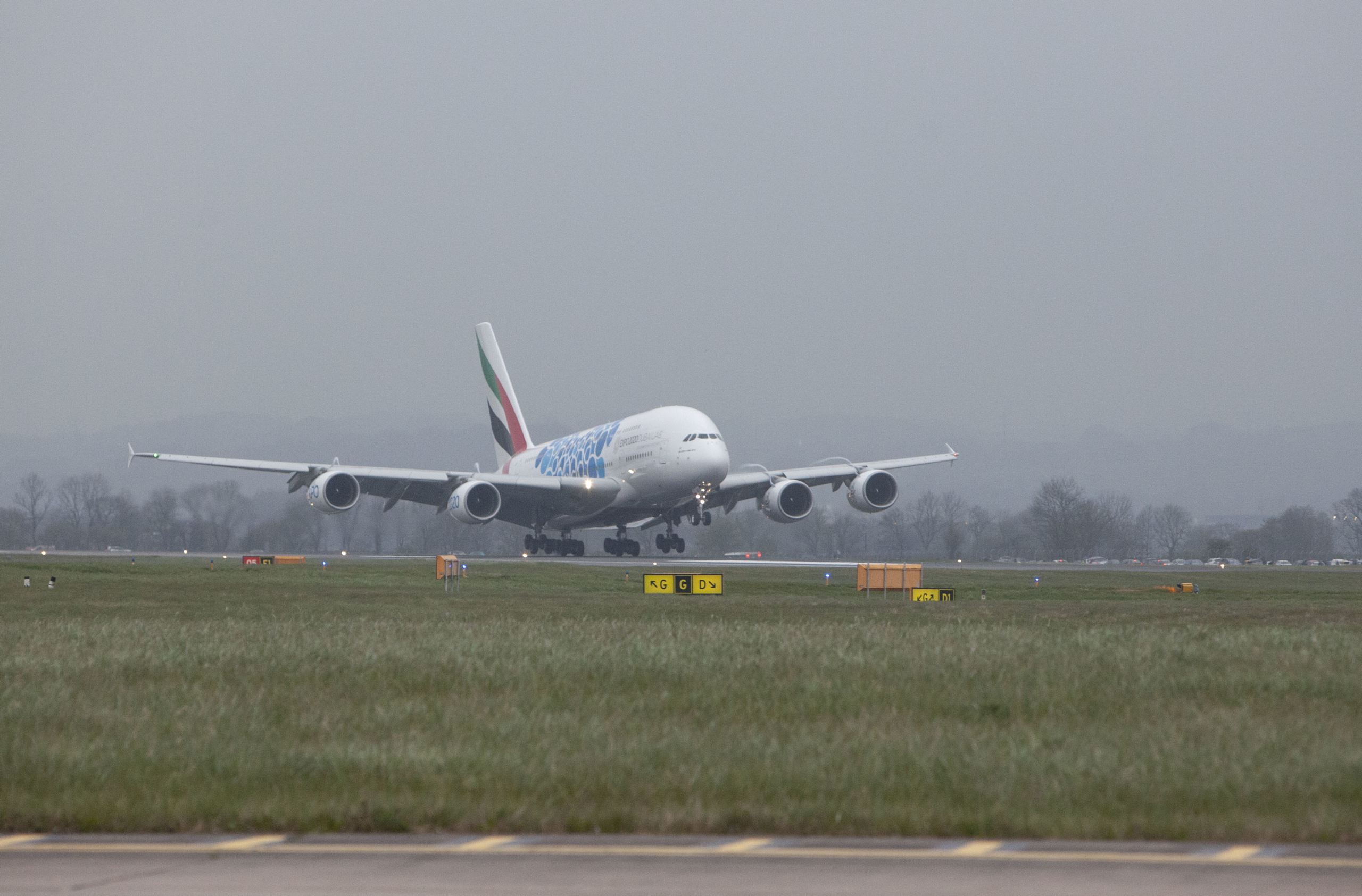 “The decision to make such a significant investment was a bold one, however, the return of this iconic aircraft to daily service underlines our continued ambition and is testament to the Dubai route’s enduring popularity with our customers.

“This decision marks yet another milestone in a relationship with Emirates that dates back to 2004, when the first ever route between Scotland and the Middle East was launched at Glasgow Airport.

“Our Dubai double daily is Scotland’s leading long-haul route, so it’s fitting that the world’s largest commercial passenger aircraft will play a part in the unique customer experience offered to Emirates’ passengers at Glasgow Airport.”

An Emirates spokesperson said: “Emirates can confirm that it plans to operate a year round daily Airbus A380 service between Glasgow and Dubai, beginning end of March 2020.”

Since the introduction of the Glasgow-Dubai service in 2004, over 4.8 million passengers have travelled between the two cities and further afield through Emirates’ network of 158 destinations.

Thousands of people gathered at the airport to see the enormous aircraft make a special appearance on April 11 2014 to mark the 10th anniversary of the Emirates route at Glasgow. The aircraft returned on April 16 last year and made Scottish aviation history when it entered into regular service for the first time on the Glasgow route.

The A380 flying between Glasgow and Dubai has a three-class configuration, with 14 private suites in First-Class, 76 lie-flat seats in Business Class and 399 spacious seats in Economy Class.

In addition to transporting passengers, Emirates’ SkyCargo on the A380 will continue to carry key Glaswegian exports across the world, including Scottish whisky, salmon, cheese, chocolate and oil well equipment. The most popular destinations for Scottish salmon, shellfish and oysters include China and Hong Kong, while Scottish Whisky is most frequently exported to South Africa, Singapore, Sydney and Korea.