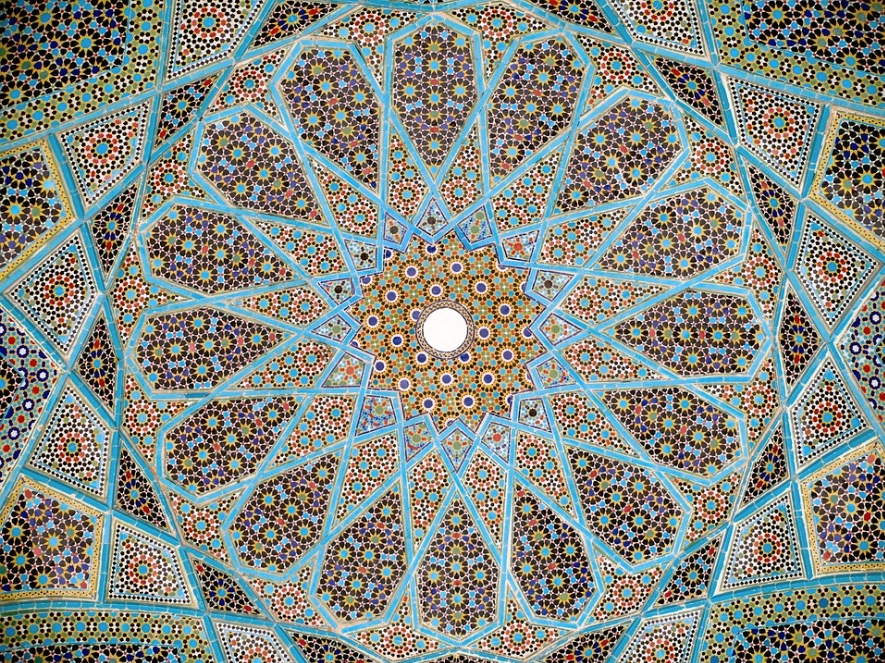 The iconic paisley pattern has experienced quite a journey to its small Renfrewshire town. This ornamental decorative pattern has become one of the most eye-catching designs in modern history, helping to put the town of Paisley on the map as a key cog in the UK’s textile industry and is still a major talking point in Paisley’s history today. Fascinatingly, the paisley pattern remains as contemporary in fashion today as it was 200 years ago. It’s by no means uncommon to see a hint of Paisley on the Paris or Milan Fashion Week catwalk.

It all started for the paisley pattern back in ancient Persia, a civilisation that goes back as far as the 7th century BC – and possibly even earlier, as some archaeological evidence dates back to 7000 BC. The motif was regularly used in ancient Mesopotamia, the area which we now associate with nations such as Iran, Kuwait and Syria. Many homeowners utilised the paisley pattern as a form of interior decoration, most notably in the form of carpets and fabrics. Inspired heavily by nature, the Paisley motif features the Persian ‘buta’: a teardrop-shaped design with a curved upper tip.

From Persia to India: The Paisley Pattern moved slowly from east to west

The buta motif and the paisley pattern as a whole then negotiated its way into Indian culture, where for many years magnificent hand-crafted cashmere shawls were made using the paisley as its prominent design. At this time, India was a huge part of the British Empire. When colonial British men returned to the British Isles from the shores of India, they opted to bring these shawls home as gifts for their wives. The shawls and the paisley pattern were so warmly received by the women of Britain that the British East India Company spotted a gap in the market and an opportunity to export these products across Europe until the late 18th century.

However, it was the small town of Paisley in the west central Lowlands of Scotland that would eventually become the hub of buta motif weaving in western Europe. Paisley’s own weaving mill was opened in 1805. The town became synonymous with the motif and as textile technology improved through the decades, the traditional two-tone paisley pattern shawls became five-tone shawls – although this still didn’t quite compare with the 15 colours used in the shawls manufactured by hand in East India.

The symbolic nature of Paisley through the cultures

The paisley pattern itself has been somewhat flexible through the generations. The motif has been used in very simple, basic terms and in exceedingly ornate designs too. The positioning of the leaves and flowers have changed at times and it has often been used in a repetitive nature too. The repetitive element proved very popular in the era of psychedelia in the 1960s and 1970s. Its resonance with Eastern symbolism – and its more contemporary ‘free love’ connotations – meant that the paisley pattern was worn as a designer item by many of the leading rock and boho-pop icons such as David Bowie, Prince and, more recently, Florence Welch.

Overall, the symbolism of the paisley motif in Eastern cultures was one of fertility and health. In India, it was deemed that those who wore paisley would be more fertile as the motif acted as an arrow pointing down to the wearer’s groin. It therefore made a very popular choice for ties both in the east and west. According to Betway Casino’s infographic on superstitions around the world, the Barnstar five-pointed motif offers a similar symbolism of good health in the United States, with many Americans adorning their barns with yellow Barnstars in the same way those in the east would adorn their homes with the buta motif. Since the era of psychedelia in the latter half of the 20th century, the paisley pattern has been a signature design with some of the most exclusive fashion houses around the world. According to BBC Culture, iconic Italian brand Etro was influenced hugely by the bold colours of the buta and the fact that the motif was rich in meaning and history. In fact, looking at the recent Etro50 capsule collection which marks the brand’s 50 years, the pattern still features heavily. More recently, the paisley pattern has enjoyed a contemporary resurgence with High Street fashion houses such as Gucci, Burberry and Yves Saint Laurent all adopting the motif.

With so many hidden meanings, symbolism and cultural adaptations, it’s safe to say the paisley pattern has had quite a past. In the town of Paisley, as many as 28,000 people were employed at the height of the motif’s thread manufacture. The town’s cotton mills were said to be the largest of their kind in the world before World War I. Unfortunately, production ceased in the early 1990s due to the decision of J & P Coats – the owners of Paisley’s original cotton mills – to set up cheaper operations in both India and Brazil.

Paisley will find out later today if it will be UK City of Culture 2021 https://t.co/cnpTTP8TTf pic.twitter.com/4qVily84K6

Nevertheless, the roots of Paisley’s textile industry live long in the memory in the town. It was a key part of Paisley’s bid to become UK City of Culture 2021 and was shortlisted down to the final five cities before falling at the final hurdle to Coventry.