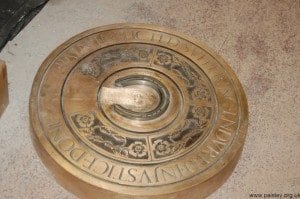 Paisley in Scotland is well known for its unique cloth, but it’s also famous for another reason, paranormal activity. There have been many unsettling and disturbing events that have taken place in the town of Paisley over the years, with some suggesting the place is very much cursed. With somewhat of a tragic past, it’s easy to see why people visit the area now, as they go in search of ghosts and other paranormal beings.

It’s believed that Paisley is haunted due to a dark curse from a group of witches. Back in 1696, an 11 year old girl became unwell in mysterious circumstances. Her behaviour became increasingly erratic, with the cause and cure for her illness unable to be found. It then became apparent that the girl was being affected by a group of witches. In the end, a group of seven suspects were convicted of their crimes, being sentenced to death by hanging and burning at the stake.

Witches have always been a huge talking point and of special interest to most of us, which one of the main reasons Paisley has kept its allure. In fact, witches continue to inspire many aspects of lives, whether it maybe movies like Into The Woods starring Meryl Streep to games like Which Witch created by mFortune.

These events have led several in the supernatural world to believe that Paisley has been cursed ever since, with various locations said to be haunted as a result. Sma Shot Cottages on Shuttle Street has played host to ghost hunts in the past, where many have heard doors slam and experienced feelings of extreme emotion. Oakshaw High Church is said to play host to a ghostly sprite known as “Wee Leach,” who is believed to lurk around the spire.

Other haunted places to visit include the Royal Alexandra Infirmary, where a grey lady is said to float around the place. Some have also reported seeing a man dragging a body bag, whilst footsteps and beds moving have also been heard. Paisley Abbey is also said to be a hotbed of paranormal activity, with a ghostly monk said to float down the aisles, while at Glencoats Memorial Hospital you can expect to find the ghost of Lady Glen-Coats herself. There have also been claims of a White Witch roaming the venue too, who is believed to be a former nursing sister from the hospital.

With Paisley being known for paranormal activity, it will come as no surprise that the town uses this to their advantage. Their annual Halloween festival has been a big hit with people as it is spectacular and loaded with everything Halloween related that you can think of. It takes its inspiration from the Paisley Witches, and features some amazing aerial performances and acts, as well as pumpkin carving, story telling and trick or treat booths. There’s arguably no better place to enjoy Halloween in the UK, with the festival having been listed as one of the best in both 2016 and 2017.

If you’re into ghosts, witches and all things spooky, then Paisley is the perfect place to visit, especially at Halloween.