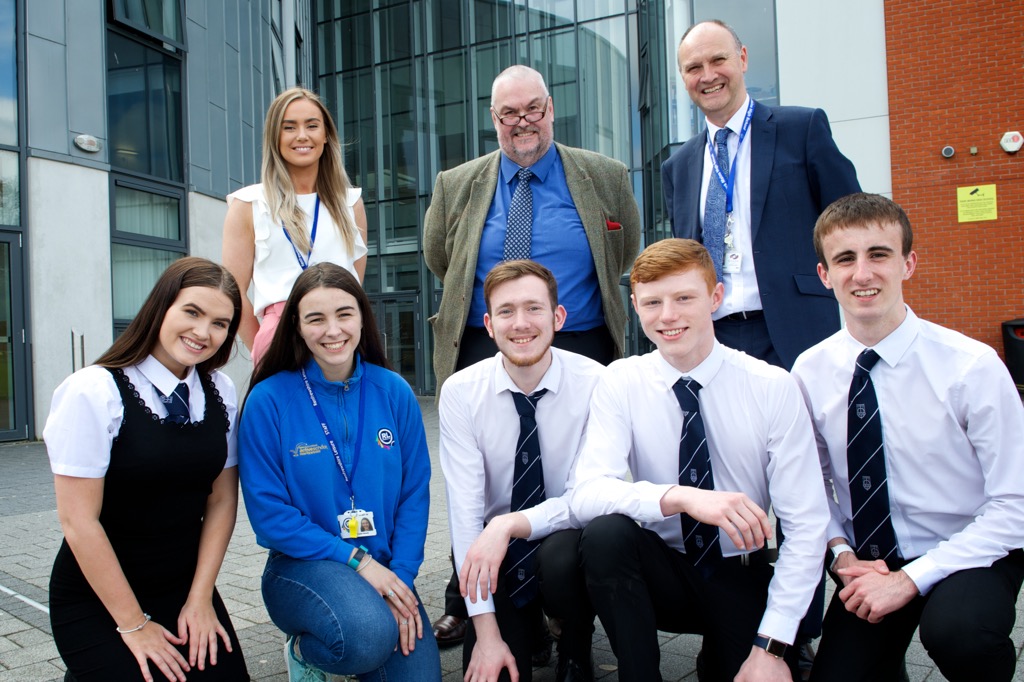 Pupils at a Renfrewshire school who invented a family fitness app praised by NHS Scotland and Andy Murray could see their idea become a reality. A team of five sixth-year students from Erskine’s Park Mains High School created the ‘Health Buzz’ app, which tracks the health and wellbeing of the whole family.

The prototype won a prestigious competition, the #DigiInventorsChallenge, run by the Digital Health and Care Institute in conjunction with Andy Murray.

Now pupils will work with Scottish-based technology experts SwarmOnline this summer to see how the app may be developed.

NHS Scotland Chief Executive Paul Gray also visited the school this week to congratulate the team and find out more about the app through a presentation by pupils.

The team of Emily Bannon, Craig Kennedy, Adam Hazle, Luisa Steele and Connor Wilson, all 17-years-old, received a £2,000 cash prize for their school, new personal tech, as well as the opportunity to have their idea made into a reality. 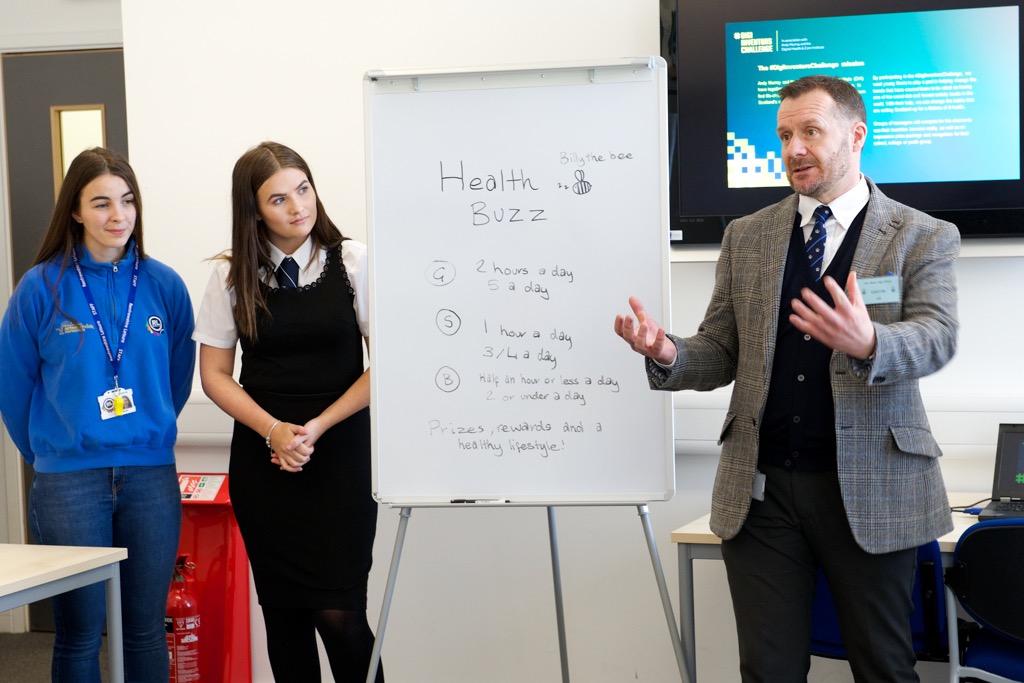 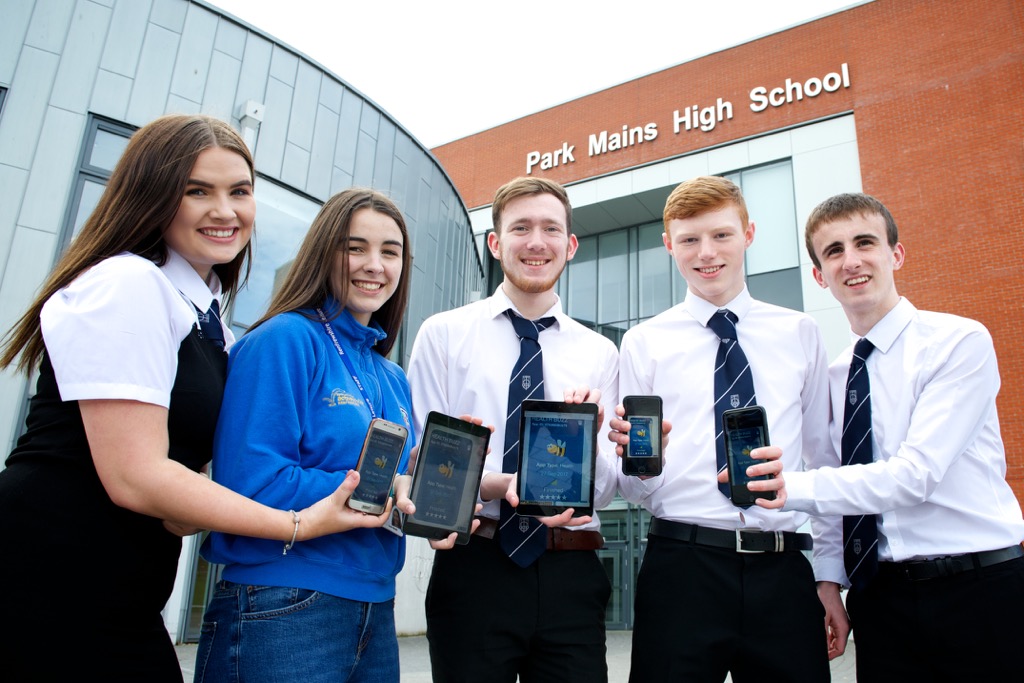 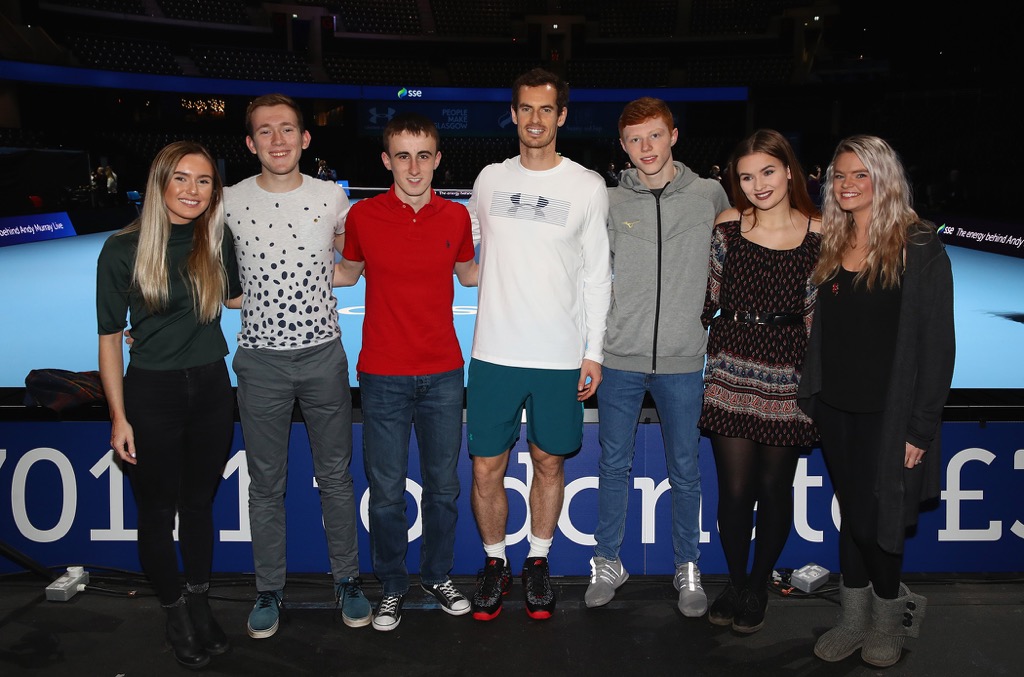 Paul Gray said: “This is a fantastic idea from the students at Park Mains High School. We all know how popular fitness trackers are, so this is a great way to build on that and get active as a family.

“The number of Scots being physically active has risen in the last five years, and we really want to keep that going. For example, by walking just one mile a day, people can make huge changes to their lives.”

“This app is also an excellent example of how innovation can help improve our mental and physical health – 2018 is the year to get Scots more active.”

The app won first place in the challenge which aims to find new ways to help young people keep active and stay healthy.

Along with other shortlisted teams, the pupils were invited to an inventor’s boot camp to develop their proposals through a series of master classes by industry experts.

They then presented to a panel of expert judges, including Andy himself and got to meet the star at the SSE Hydro event in November, where he played Roger Federer in an exhibition match.

Former Wimbledon champion Andy revealed how impressed he is with the pupil’s design and said: “I liked this idea straight away, it’s a really big achievement for the team behind it. Anything that gets people moving more is a good thing and will hopefully help to improve the health of the nation.”

Judges also praised the team’s high quality professional pitch and recognised the potential of the app to transform lives by focussing on the family as a whole, and not just individuals.

Renfrewshire Council’s Children’s Services and Education Convener, Councillor Jim Paterson said: “In the Year of Young People it’s wonderful to see how Renfrewshire school pupils can come up with such creative and award-winning ideas that could benefit us all. I look forward to hearing the progress of the app.”

Emily Bannon from the team said: “We are happy to get as far as we have with the app and want to make fitness more a hobby than a chore across the generations and maybe help make a difference to people.

“We have become so passionate about it and are excited to see what comes next.”

Park Mains Head teacher Michael Dewar, said: “This was an outstanding achievement from a group of very talented S6 pupils. Our hope is that the app will be developed to help make a positive impact on the health and well-being of families across the country.”

Renfrewshire Leisure’s Active Schools Co-ordinator at Park Mains and the pupil’s mentor, Olivia Bell, said: “We are overwhelmed with how far we have come and hope the app will eventually be accessible in our local and wider primary schools and allow pupils to utilise technology that is already at their fingertips.”

The shortlist for this year’s challenge will be announced on May 30th.

George Crooks Chief Executive of the Digital Health and Care Institute said: “We are delighted to be working with the team at Park Mains High School and SwarmOnline to help develop their idea from the #DigiInventorsChallenge.”