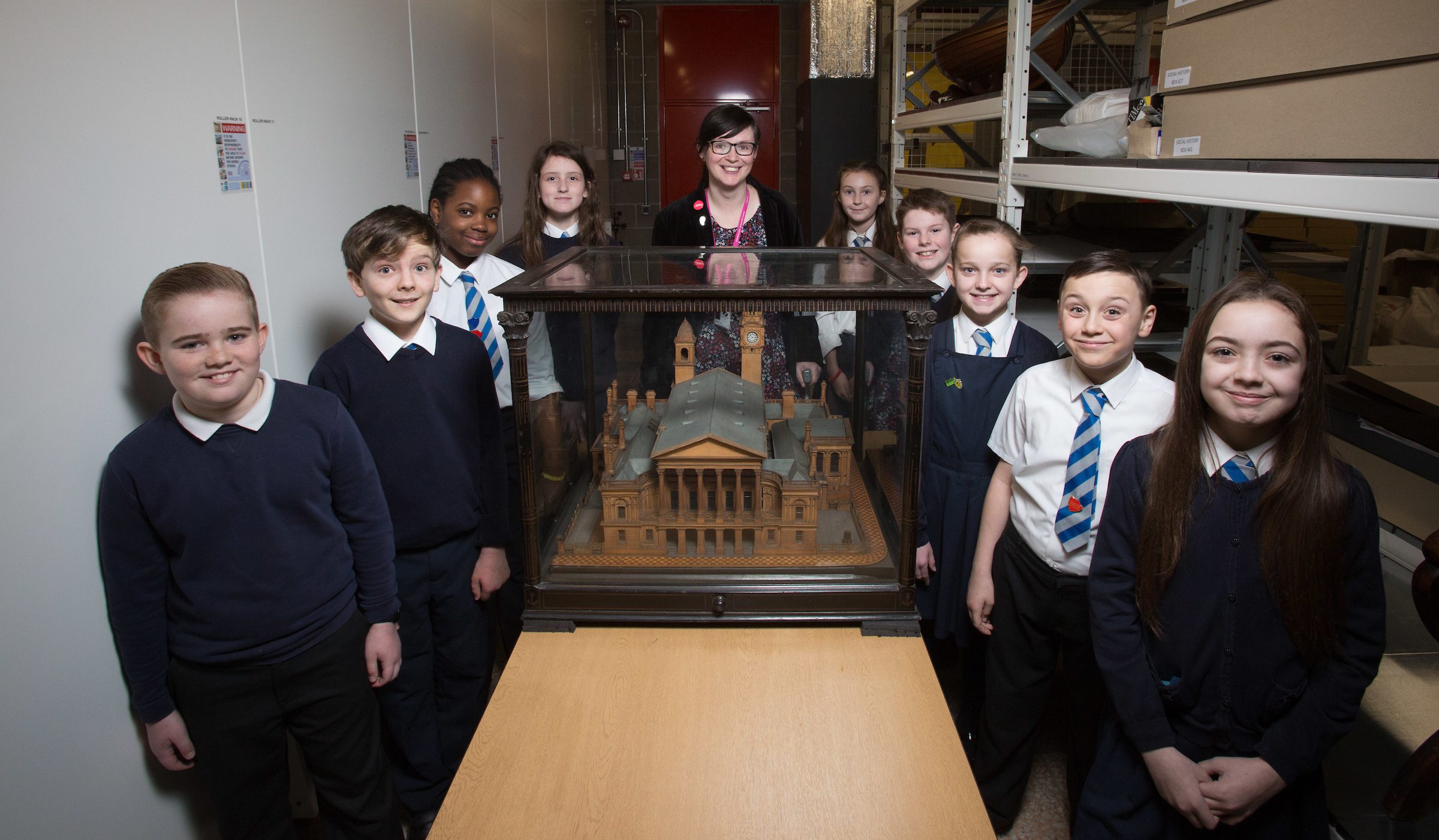 UK City of Culture 2021 contender Paisley is unveiling a treasure trove of museum items – as a new £3.7m facility believed to be a first for a UK High Street prepares to open its doors. FREE FIRST USE
Pupils from St Marys Primary School in Maxwelton ,Paisley visit Paisley :The Secret Collection a new Museum Resource Archive based on the High Street.
Pictured Councillor Lisa Marie Hughes and Pupils round an Original Rare Scale Model of Paisley Town Hall
Mark F Gibson / Gibson Digital
infogibsondigital@gmail.co.uk
www.gibsondigital.co.uk
All images © Gibson Digital 2017. Free first use only for editorial in connection with the commissioning client’s press-released story. All other rights are reserved. Use in any other context is expressly prohibited without prior permission

Paisley: The Secret Collection will house tens of thousands of items from Renfrewshire’s collections in a purpose-built publicly-accessible storage unit in a former retail property, aimed at bringing new footfall into the town centre. Paisley will find out in early December whether it will be crowned the first Scottish place – and first ever town – to win the prestigious title, awarded every four years by the UK Government’s Department for Culture, Media and Sport.

The bid is taking place as part of a wider push to transform Paisley’s future by using its internationally-significant heritage and cultural assets to turn it into a key destination for visitors and events.

And councillors and bid bosses believe by using its unique past to inject new life into the town centre, Paisley can serve as an example to struggling towns everywhere. Paisley’s place as the one-time home of the global thread industry helped it build a massive museum collection – with many of the items donated by the mill-owning Coats and Clarks families.

The collection includes some of Paisley’s world-famous textiles, plus a mix of ceramics, world cultures, social history, art and sculpture, natural history and local archives – with many of those items unseen by the general public in decades or longer.

While other areas have public-accessible museum stores, it is believed Paisley’s is the first on a High Street.

A dedicated decant team are due to complete the first phase of a major project to populate the store by the end of the year.

Phase two will see thousands more items moved from the town’s main museum – itself initially gifted to the town by the Coats family in 1871 – before it undergoes a £42m revamp to become a world-class destination with the town’s textile heritage at its heart.

Chair of Renfrewshire Leisure Councillor Lisa-Marie Hughes visited the facility this week and said: “It’s called Paisley: The Secret Collection for a reason because it will house some amazing items the people of Paisley and Renfrewshire will never have known were in their midst.

“The timing of the opening is fitting, with a decision due on the town’s UK City of Culture 2021 bid very soon – the bid aims to tell Paisley’s untold story and show why we matter to Scotland, the UK and the world, and this facility helps showcase why that is.

“The museum store is also key to the council’s wider plan to revitalise Paisley’s town centre by using our unique selling points to attract visitors and give people new reasons to come into the town.

“The wider retail environment has changed forever and Paisley has been affected by the same issues as towns everywhere – as shoppers move online or to out-of-town centres.

“But in Paisley we believe that by finding innovative ways like this to bring new footfall into the town, surrounding traders will get a boost, and new ones can set up.

“With Heritage Lottery Fund support confirmed for the new £42m museum, a new £5m Paisley Library to be built in another vacant High Street unit and a confirmed £46m council investment in venues including Paisley Town Hall ahead of 2021, Paisley is investing in culture and heritage as a route to transform our situation.

“In doing so we hope to the show the two-thirds of the UK which doesn’t live in a city that towns matter and that others can use what sets them apart to change their future, just as we hope to.

“The store will also be a really valuable educational resource which will allow the next generation of local school pupils to learn about the world and their town’s role in it.”

The facility is at 9 High Street – in a basement underneath the Bargain Buys store historically occupied by a Littlewoods store – and accessible through a specially-built shopfront entrance.

A number of school groups will be among the first to see inside the store, with pupils from St Mary’s Primary getting a sneak peek this week.

General public will only be able to view the store by appointment – but bookings are now being taken from public tours and research facilities from January 2018 onwards via www.renfrewshireleisure.com/thesecretcollection