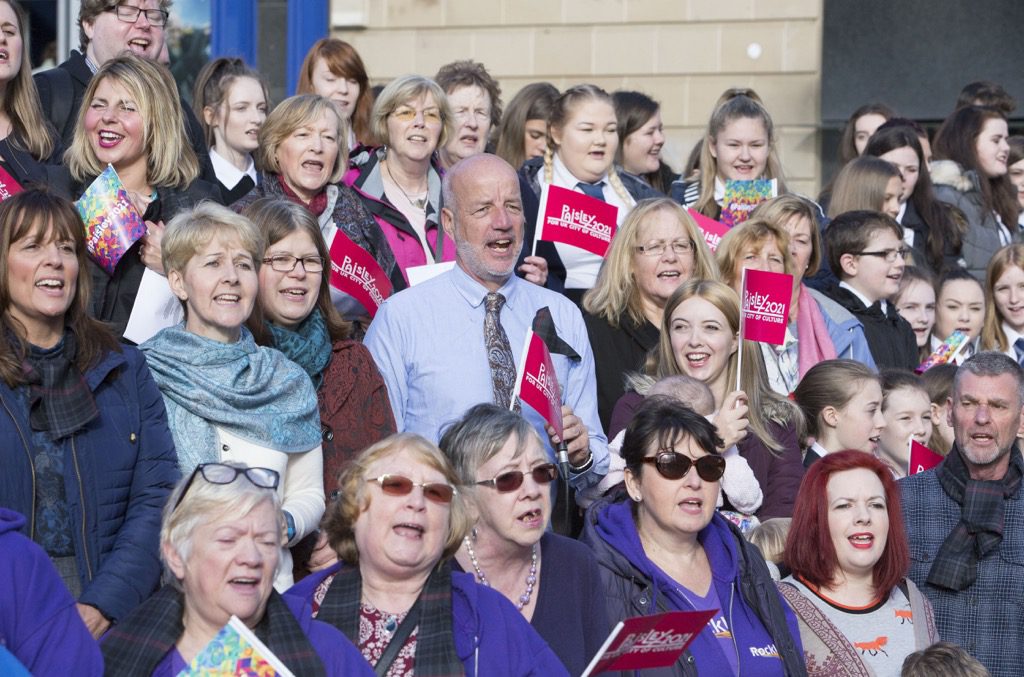 In the two years since Paisley launched its bid to be crowned UK City of Culture 2021, the town has discovered a new found optimism and confidence. Paisley was shortlisted for the title in July, along with Coventry, Stoke-on-Trent, Sunderland and Swansea. A decision by competition organisers the Department for Digital, Culture, Media and Sport is expected next month.

Since the town officially declared its title ambitions at Paisley Abbey on November 13, 2015, as part of a wider plan to transform the area, more than 34,000 people have been involved in the conversation around the bid.

Paisley’s popular events calendar has seen a marked increase of over 34,000 visitor numbers in 2017 so far – with a number of fantastic events still to take place in the town before the end of the year. The town’s major events have also seen a 37% increase in visitors from out with Renfrewshire. Sharon McAulay from the award winning Paisley-based community initiative, the STAR Project, said: “The impact of the bid so far has been huge.

“When we were shortlisted attitudes literally changed overnight. People believe that we can actually do this, that Paisley is so much more than a bunch of negative statistics.

“This bid is a real opportunity for us to show the world that Paisley is ready to be put back on the map.

“Our members have been talking about how winning will not just benefit them, but also their children and their children’s children too, so there is a real sense of future change and opportunity for all.” More than 200 local businesses and a raft of sponsors have also backed the bid. Companies with international links including Glasgow Airport, drinks giants Diageo and Chivas Brothers have pledged funding totalling £260,000 if Paisley wins the title in December.

Major milestones have included the town hosting the British Pipe Band Championships, with Paisley also welcoming the Royal National Mod in either 2021 or 2022.

School children from across Renfrewshire also set a new world record for the largest ever architecture lesson. Using coding game Minecraft, 406 pupils from eight local primary schools were guided through a history of Paisley’s architecture and learned how to create buildings using code.

Paisley 2021 Bid Director Jean Cameron said: “Paisley’s connections throughout the UK and the rest of the world have continued to grow and grow in the two years since the bid was launched. We have seen Paisley designers showcase their work at London Craft Week and reach new markets from their base in the town.

“There have also been a number of international link-ups, including the opening concert of this year’s Spree arts festival which twinned with the Rajasthan International Folk Festival in India.

“We have initiated cultural conversations at Westminster and thanks to our £1m Culture, Heritage and Events Fund, the local creative scene is benefitting from new national partnerships.

“Launching the bid has generated a positive outlook for the future in the town and surrounding areas. Hosting the title could also create the equivalent of 4,700 jobs over ten years and provide a £175m economic boost to the local economy.

“We have so much to offer and winning the title will show why Paisley matters, not just to Scotland, but to the UK and the world.”

The Paisley 2021 campaign has also helped boost the town’s global links – and even to outer space when a patch of the Paisley Pattern was sent on board a rocket bound for the International Space Station in July 2016.

Alan McNiven, the CEO of community group Engage Renfrewshire, said: “The bid for Paisley to be City of Culture 2021 has created an atmosphere of energised excitement – and that energy has created countless amazing, emotional moments over the last two years.

“The Paisley 2021 movement has provided fantastic opportunities for local engagement and we’ve heard thousands of Paisley voices describing their enthusiastic support for the UK City of Culture 2021 campaign.

“It has captured the community’s growing confidence in a brighter future for Paisley. “