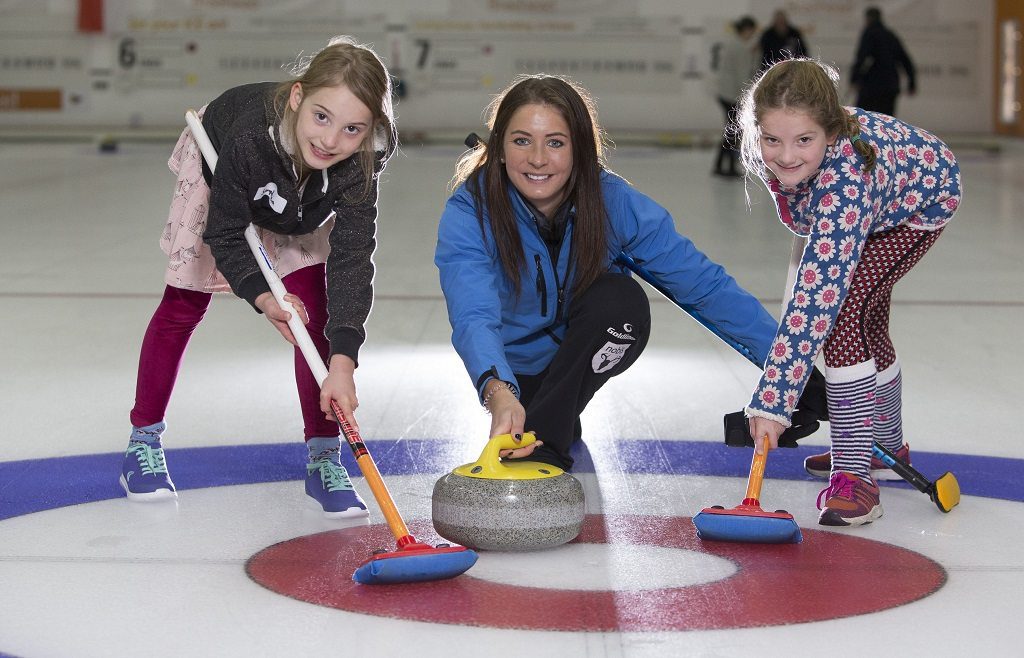 Eve was at the regular Saturday intu Braehead Curling Sweep, as part of her new role as Curling Ambassador at the rink.

And three generations of the same family were there to get some curling tips from Eve. Grandad, Peter Mills, from Houston, Renfrewshire, his daughter, Catriona Mills-Stoyle, and seven-year-old granddaughters Grade Elston and Sophia Mills-Stoyle, from Johnstone took to the ice with the Olympic curler.

It’s the first time an ice rink in Scotland has engaged a high-profile curler to promote the sport.

Now her image will be seen on giant posters by hundreds of thousands of people visiting the intu Braehead shopping centre, which has a dedicated curling rink.

And she’s been selected to represent Great Britain in her third Winter Olympics, which is being held in South Korea, in February, next year.

Eve aims to make curling a sport that’s popular with all ages and people from all social backgrounds. But admits that she’ll have to tackle the false perceptions of curling and curlers among people who don’t really know the sport.

She explains: “The image of curling has changed a lot since I first started playing as a nine-year-old, but a lot more can be done.

“I’m sure a lot of people think curling is for an older generation – but nothing could be further from the truth and nowadays there are a lot of younger people taking up the sport.

“And when it comes to competitive curling at the top level of the sport, the age range of the curlers is between 24 and 30.”

Eve continues: “People should know that curling is cool. It’s really quite fun and it’s a sport that can get you fit too, especially when you are throwing a 44-pound granite stone up a sheet of ice!”

There are more than 40 clubs and 1000 curlers of all ages and abilities playing on the curling rink at intu Braehead, which hosts starter sessions for the novice, to club competitions, disabled curling, to international tournaments featuring some of the world’s best curlers.

Scott Martin, general manager of intu Braehead Leisure says: “We have one of the best curling rinks in the country, which is available for anyone and everyone who wants to try out the very popular growing sport of curling.
“Eve is one of the country’s most successful curlers and an inspiring role model. I’m sure she will be a great ambassador and help promote and encourage more people to try curling.”

Tips for living off a state pension
Scroll to top