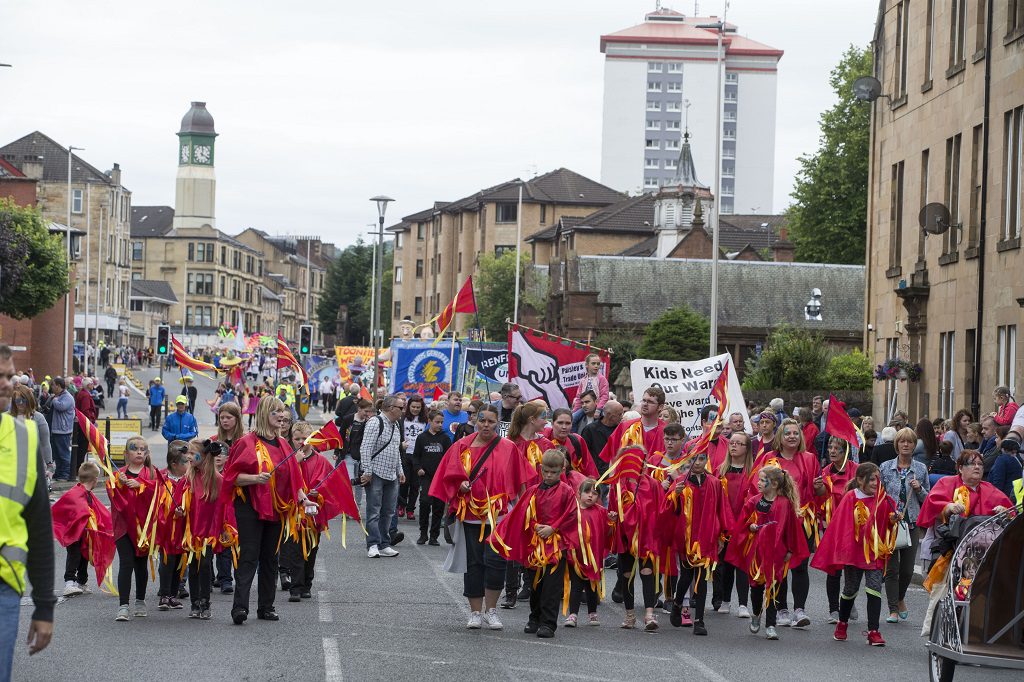 Thousands of people descended on Paisley town centre at the weekend for the first-ever Weave festival, celebrating the town’s radical history and heritage.
The bumper weekend was taking place alongside the annual Sma’ Shot celebrations – one of the world’s oldest workers festivals – and saw a diverse range of cultural performances and events, with more than 40 shows across six venues and four outdoor live zones.
Burning of the Cork
Weave is inspired by the town’s globally-significant heritage of weaving and radical politics and took place as part of the push towards Paisley’s bid to be UK City of Culture 2021.
The weekend festival was one of Visit Scotland’s signature events in Scotland’s 2017 Year of Heritage, History and Archaeology celebrations.
More than 350 costumed performers, artists, community groups and families took part in the Sma’ Shot parade, led by the Charleston Drum – the traditional way of calling out the weavers for the annual festival.
This year’s parade explored the theme of ‘the threads that bind us’, empowering participants and audiences alike to celebrate what brings us together and offers a sense of belonging.
Fiona Hyslop, Cabinet Secretary for Culture, Tourism and External Affairs, attended the event to meet some of the performers and experience some of the activities taking place.
She said: “As one of the signature events for the country’s 2017 Year of Heritage, History and Archaeology, Paisley’s Weave festival celebrates the town’s weaving heritage via a programme of live music, design, art, poetry, dance and street theatre, set against the historic town centre.
“I was delighted to meet performers and participants and hear first-hand the story of the weavers’ rebellion, the iconic Paisley Pattern and its legacy for modern-day makers and artists.
“This family-friendly event promotes Paisley’s rich weaving heritage and the stories around this heritage that are still alive in the community today. Sharing these stories is a central aim of the Year of History, Heritage and Archaeology as we shine a spotlight on Scotland’s rich and vibrant attributes in relation to its historic environment and past, to the people of Scotland and our visitors.”
Sma’ Shot Day began after a dispute between the local shawl weavers and manufacturers in the 19th century. The sma’ shot was a fine weft yarn, woven into Paisley shawls by the weavers, which they were not paid for. An agreement was finally reached to pay for the sma’ shot in 1856.
Councillor Iain Nicolson, Leader of Renfrewshire Council, said: “The Weave festival celebrates Paisley’s great heritage that helped make the town an industrial and manufacturing powerhouse known the world over.
“Events like this help attract visitors to the town which not only supports the local economy but allows us to continue to share Paisley’s unique story.”
Some of the highlights from the weekend included:
– the premiere of Iranian textile artist Paria Goodarzi’s new show Mass Movement, influenced by her personal journey as a refugee rebuilding her life in Scotland;
– an outdoor family ceilidh, mass drum-off, and four live music stages, hosted by Capital Radio DJ Gary Spence and by Celtic Music radio and local promoters LNP, located at Abbey Close, Gilmour Street, Paisley Arts Centre and Brown’s Lane;
– weaving demonstrations with visual art curator and weaver Dan Coughlan at Sma’ Shot Cottages;
– the Dooslan Stane stage, hosted the union speeches, re-enactments and poetry / spoken word or ‘speakers corner’ activities;
– the ‘storytelling yurt’ at Abbey Close enabled people to find out more about the Sma’ Shot story and Paisley’s weaving heritage from professional storytellers;
– a poetry slam, storytelling sessions, and a series of talks, tours, workshops and demonstrations from local artists and designers, including traditional Paisley shawl weaving;
– PaisleyMake Makers’ Market at Paisley Abbey showcased a variety of exceptional and innovative Scottish designers and makers featuring everything from clothing and jewellery to interior design;
– Scottish Alternative Music Awards (SAMAs) in collaboration with L’n’P Promotions and Sma’ Shot Weave Festival hosted an evening of live music featuring; Rachel Sermanni (full band), The Great Albatross and Mark McGowan.
Paisley 2021 Bid Director Jean Cameron said: “Weave festival has been a great success, showcasing the creative talent Paisley has to offer alongside the best established artists and performers in their field.
“The Sma’ Shot parade is a firm favourite in the calendar each year and it was great to see so many local community groups take part and entertain the crowds.
“Nurturing and growing our local talent is a key part of Paisley’s bid to be UK City of Culture 2021 and we are starting to see this ambition become a reality.”
For more information on Paisley 2021, visit www.paisley2021.co.uk, like /Paisley2021 on Facebook or follow @Paisley2021 on Twitter and Instagram.
https://www.paisley.org.uk/wp-content/uploads/2017/07/sct_paisley_free_jsh6.jpg 682 1024 Danielle McGuire https://www.paisley.org.uk/wp-content/uploads/2015/09/paisley-logo-trans.png Danielle McGuire2017-07-01 17:15:472021-05-14 06:38:58Thousands descend on Paisley town centre for first-ever Weave festival

Glasgow News? Daily Updates part of our network
Paisley’s bid to bring Mod back to town in 2021 is lodged