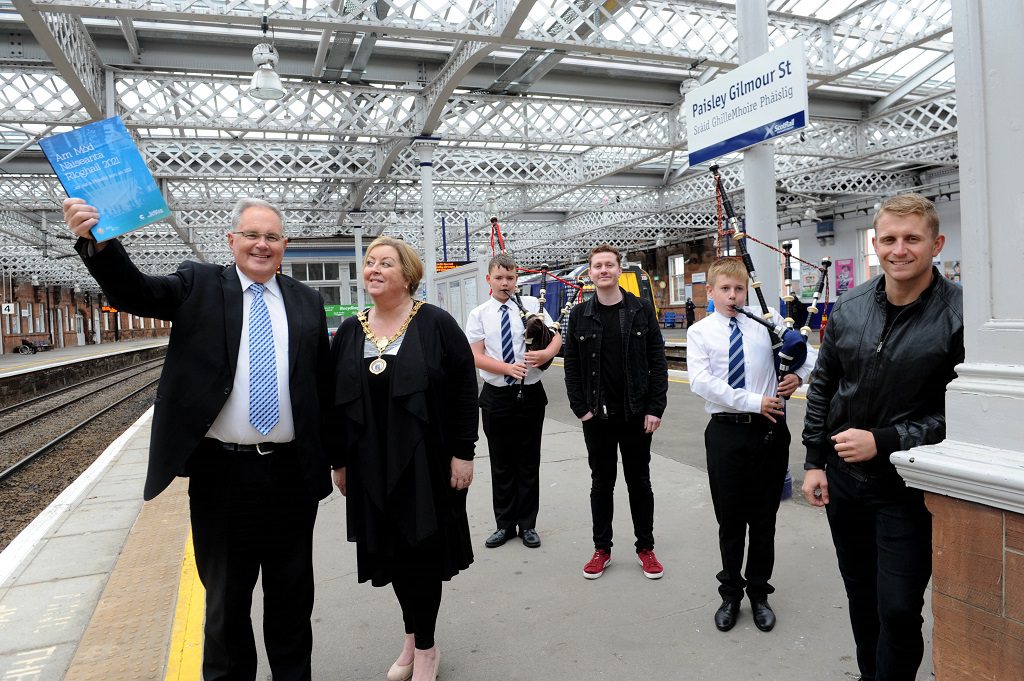 A bid to bring the world’s largest celebration of Gaelic language and culture back to Paisley has been lodged – for what would be one of the centrepieces of the town’s potential UK City of Culture 2021 year.

Paisley is bidding for the Royal National Mòd in four years time – with the town’s one previous staging of the event in 2013 being the second-largest in the event’s history.

Renfrewshire Council has already ring-fenced a budget of £185,000 plus substantial extra in-kind support to cover hosting costs – with the event expected to bring thousands of visitors and a seven-figure economic boost to the area.

Bid bosses believe Paisley’s central location, excellent transport links, unique venues and established major event track record will add up to another successful Mòd. If the town was named UK City of Culture 2021, the Mòd would be key to that year’s programme of events.

Paisley’s Mòd 2021 bid will be handed in at the Inverness offices of event organisers An Comunn Gaidhealach on Friday by the chair of the local organising committee, Gordon MacLennan.

Gordon – also the chief executive of Strathclyde Partnership for Transport – was joined at Paisley Gilmour Street station to see the bid off by vice-chair, Provost Lorraine Cameron, members of the Renfrewshire schools pipe band, and some of top trad band Skerryvore, who are backing Paisley’s Mòd bid.

He said: “We would be absolutely thrilled if An Comun were to bring the Mòd back to Paisley in 2021, and believe we have put together a very strong bid.

“The last – and only – Mòd held here in 2013 attracted 8,000 people over nine days and delivered a £1.4m economic impact, and Paisley was very well received as a location by visitors from across Scotland.

“Aside from our unique venues, such as Paisley Town Hall and Abbey, our transport links are second-to-none – with an international airport on our doorstep, easy access to the motorway, and Paisley Gilmour Street station being Scotland’s fourth-busiest, handling five million passengers a year and a train to Glasgow every eight minutes.”

“We have also invested in the next generation, with our annual Fèis Phàislig music festival having seen around 700 local young people engaged in Gaelic and traditional music, with musicians visiting 27 local primary schools this year alone.

“The area also has a strong record of supporting traditional music, with many trad acts featuring on the bill for our annual Spree festival in October, and the MG Alba Scottish Trad Awards coming to Paisley for the first time this December.

“We want to build on that by hosting another successful Mòd whether we win the Uk City of Culture title or not.”

Martin Gillespie – a founder member of Skerryvore, in Paisley last year as a Spree headliner – added: “I have a long association with the Mòd – myself and my brother competed in several when we were young – so it’s an event that means a lot to me.

“It’s good to see such a strong bid coming from a place in the central belt as that would help open up the event to new audiences.

“We played Paisley Town Hall last year – it would make a great main venue for Mòd competition and there’s no doubt the town would be a good host.”

Paisley’s bid to be UK City of Culture 2021 is part of a wider push to transform the town’s future using heritage, culture and events and the Uk Government is expected to announce the shortlist for the next stage of the competition over the summer.