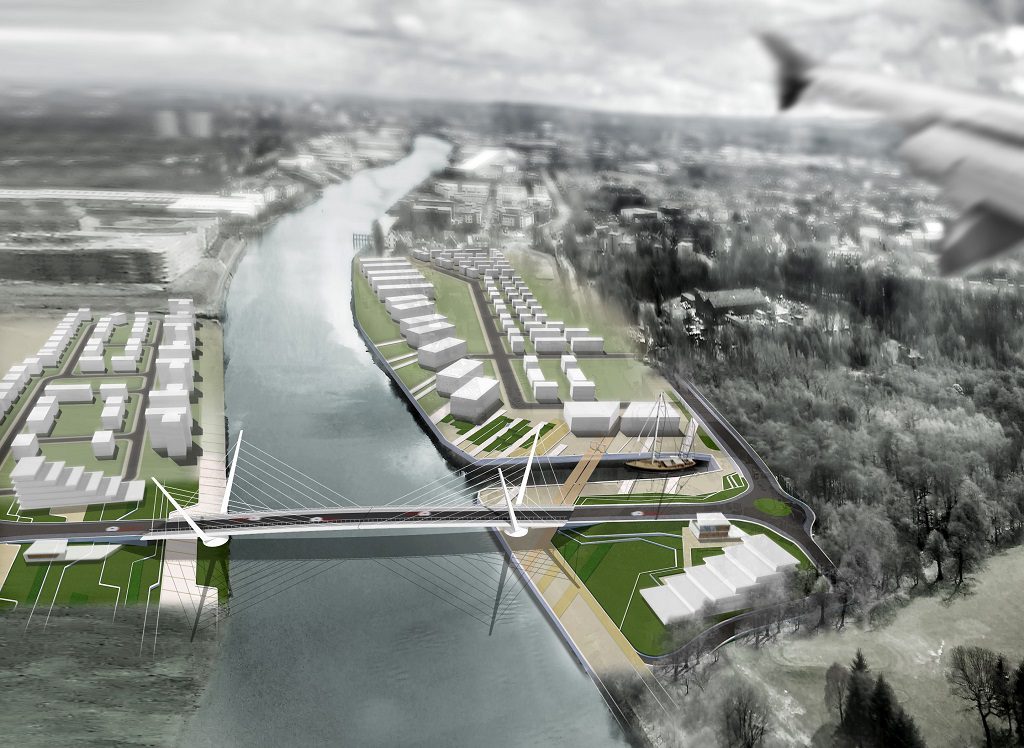 The award-winning architect behind the Falkirk Wheel believes proposals for the Clyde’s first opening bridge will act as a symbol of the region’s regeneration.

Internationally acclaimed Tony Kettle has drawn on the area’s rich shipbuilding heritage to develop a new road bridge between Renfrew, Clydebank and Yoker as part of a major infrastructure investment project.

The bridge, which will open for passing ships and accommodate vehicles, pedestrians and cyclists, is a key component of Renfrewshire Council’s £90.7million Clyde Waterfront and Renfrew Riverside project, which is funded through the Glasgow City Region City Deal.

Leading engineering and design consultancy Sweco worked with Kettle Collective to develop the conceptual design for the new twin-leaf bridge which uses a modern cable stay system akin to the Queensferry Crossing.

Each leaf of the bridge opens and closes horizontally, with the joint at a 30-degree angle in a nod to the local dry docks, while inclined masts rotate to resemble the turning motion of cranes.

“The design is inspired by the shipbuilding story of the Clyde,” said Kettle. “We sourced historical photos and maps which show dry docks cut into the embankments and there was the movement of the cranes, turning in beautiful circular motions to construct the ships.

“All of this was inspiration for us when creating the bridge to be both a physical landmark and one that is symbolic of the area’s traditions and its regeneration.

“Its design is packed with drama and dynamism, creating a visual spectacle which we believe will draw people to come and see it, but there is no compromise on the functionality. The aesthetics accentuate the functional aspects to give the bridge an expressiveness and elegance.”

Kettle hopes the project could be extended to include a viewing platform and visitor attraction, providing a place for people to learn more about the history of the Clyde and explore the mechanics behind the bridge.

He was the brains behind the 1,200 tonne Falkirk Wheel which has attracted more than 5.5million people since it opened in 2002.

Kettle Collective has also been involved in a wide range of major international projects from designing the Solar Innovation Centre in Dubai to drawing up designs for the 470-metre Lakhta Tower in Russia, which will overtake The Shard as Europe’s tallest building.

The new River Clyde crossing is part of plans to connect communities across the river and regenerate the Clyde Waterfront as an attractive area supporting residential, industrial, business, retail and leisure opportunities.

It is, Kettle admits, a project he can’t fail to be excited by.

He added: “Every project is like one of your children and you love them all equally, but working on projects in Scotland are the most important to us as it’s our home. It’s an honour to have the opportunity to work on a project like this which is focused on regeneration.

“We want to create something special for the area. Clyde Waterfront and Renfrew Riverside is a brilliant project, designed to bring people together, bridging communities. It’s funny how communities can sit side-by-side, separated by physical and symbolic barriers. Hopefully this bridge will bring people together for the benefit of everyone who live and work there.”

Plans for the crossing and all Clyde Waterfront and Renfrew Riverside infrastructure are being considered by planning authorities in Renfrewshire, West Dunbartonshire and Glasgow this summer. If approved, construction is anticipated to start in 2018 and be completed in 2020.

Glasgow News? Daily Updates part of our network
“The Story Goes On”