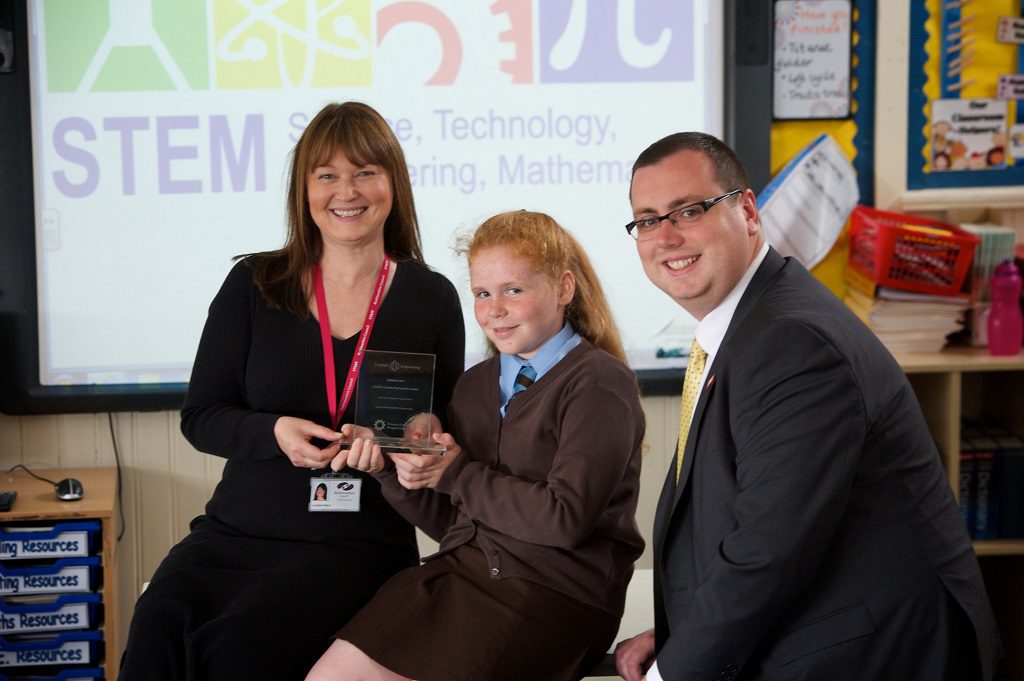 A pupil from St Fillan’s Primary School in Houston has won a national engineering award for her solution to tackling food waste.

Primary 5 pupil Grace Clark (10) was chosen as one of two winners in her year at the recent Scottish Engineering Leaders Awards 2017 in Glasgow for her idea to create a food scanner that people could use in their homes to alert them when food had to be used to avoid it going out of date.

More than 12,000 primary and secondary pupils from across Scotland entered the awards which are run by Primary Engineer and supported by engineers in Scotland. The awards look to create links between schools and industry by having engineers visit classrooms and speak with the children about their work as a way to get them enthused about science, technology, engineering and mathematics (STEM) subjects.

Grace said: “I came up with the idea for the food scanner after seeing my mum throw out food which was passed its sell by date. I thought it would be really helpful if there was something in the house which told you when you had to use up the food in your fridge and cupboards.

“I was really happy and surprised to win the award because I know a lot of kids entered the competition. I’m not sure yet what I want to do when I grow up but I did enjoy learning about all the different things engineers do and coming up with an idea to solve a problem.”

In addition to Grace’s success seven other pupils from the school were also shortlisted for awards. Two of those pupils, Caragh McAuley and Zara McGowan from Primary 1 and 2, were selected to have their work displayed in the Barony Hall in the weekend following the award ceremony.

Cllr Jim Paterson, Convenor of Education and Children’s Services, said: “It’s inspiring to see our pupils do so well on a national stage especially in STEM areas. Grace should be very proud of what she has achieved.

“By developing and encouraging children to have an interest in these subjects from a young age we are helping to open their minds to the exciting career opportunities that science, technology, engineering and mathematics can offer.

This marks the third time St Fillan’s Primary School has entered the awards. The school’s improvement plan has a real focus on STEM subjects. To help introduce the pupils to STEM teachers carried out a series of introductory sessions to engage the pupils with the subjects covering areas like electric cars, bridges and even flood defences to broaden their knowledge of the subjects.

Mrs Jennifer Kaney, who helps lead the STEM programme at St Fillan’s Primary School, said: “We have been committed to showing our pupils the range of jobs that engineers do and this competition is a great way of encouraging them to think creatively to solve problems. It also helps challenge the children’s perceptions of what engineering is.

“The children have been so engaged with the competition and the level of creativity and ideas that they have come up with is really impressive. We’re very proud of Grace that her entry was chosen as the winner – she put a lot of thought into the design and it helps address an everyday problem.”

Before the children submitted their entries teachers invited parents who work in engineering to come in and speak to the pupils about their jobs. The children were able to ask them questions about their jobs in order to find out more. Pupils were then asked ‘if you were an engineer what would you create?’ and tasked with coming up with a suitable invention and a letter explaining their idea.