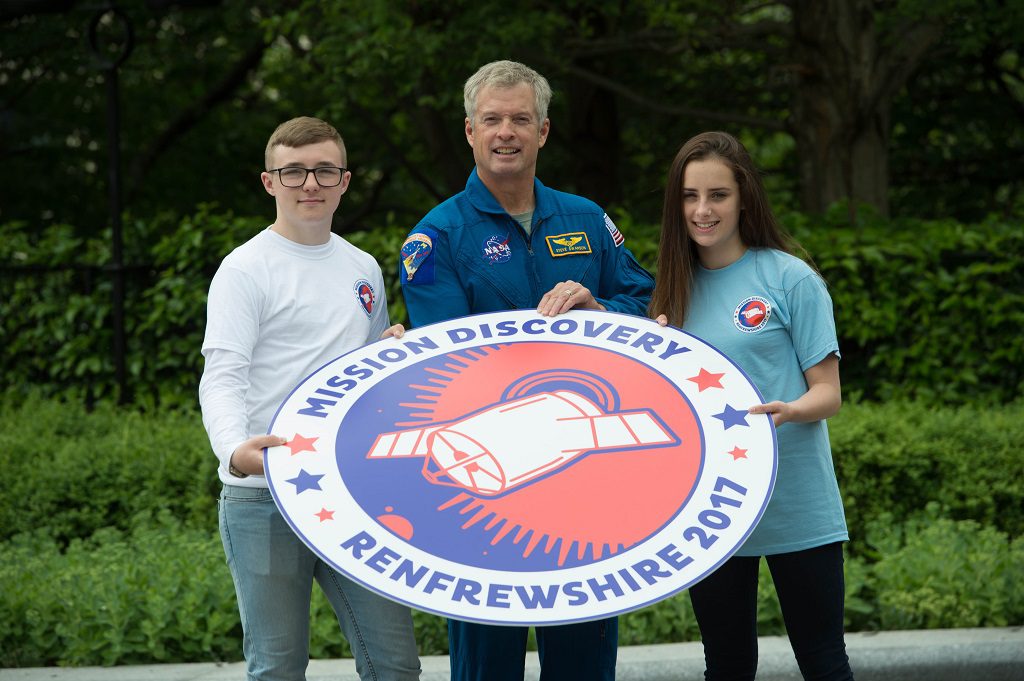 School pupils from Renfrewshire, Inverclyde and East Renfrewshire will work together to design a science experiment that can be carried out in space during Mission Discovery Renfrewshire, an event hosted by Renfrewshire Council in partnership with University of the West of Scotland (UWS) and run by the International Space School Education Trust (ISSET).

The programme gives young people the chance to learn from NASA’s approach to developing leadership, team building and personal development as well as fostering interest in science and research.

Teams of pupils will work alongside student mentors from UWS and a panel of space experts, including Steve Swanson, 56, who will share his insights and experience gained during 643 days of space flight.

Renfrewshire’s Provost Lorraine Cameron said: “Mission Discovery has been a tremendous success in Renfrewshire and pupils who have taken part tell us what a great programme it is.

“Learning first-hand from space experts is a unique opportunity for young people and we hope it will inspire many of them to consider taking science forward as a career.

“Renfrewshire is one of only a few places where children can learn directly from NASA astronauts and that’s thanks to Mission Discovery and the team at ISSET.

The experiment was designed to test whether bacteria can enable phosphate to become soluble, which is a step towards enabling plant growth on Mars.

The winning team said: “It is great that our experiment is on its way from Paisley to the International Space Station and it will be amazing to see the results. We know there is an abundance of inorganic phosphate on the surface of Mars, but plants would need it to be solubilised in order to grow.

Professor Craig Mahoney, UWS Principal & Vice-Chancellor, said: “The Mission Discovery project is one of the most innovative programmes we’ve ever been involved with at UWS.  It is vital that as a university we promote and nurture the development of science, engineering, technology and mathematics capability in students and young people and introduce them to these areas as well as to the prospects of higher education.

“We want to foster interest in these areas as well as developing and encouraging the best talent and this project goes a long way towards achieving this goal. As such, UWS is delighted not only to take a lead role in supporting the Mission Discovery project for the fourth year running, but also to be hosting this year’s event for the second time at our Paisley Campus which brings together nearly 250 secondary school students onto the Campus.

“We are extremely keen to continue to develop our involvement in this important project that continues to support widening access and the pursuit of higher level skills in students.”

Pupils will find out which experiment has been chosen to be launched into outer space at the end of the programme.