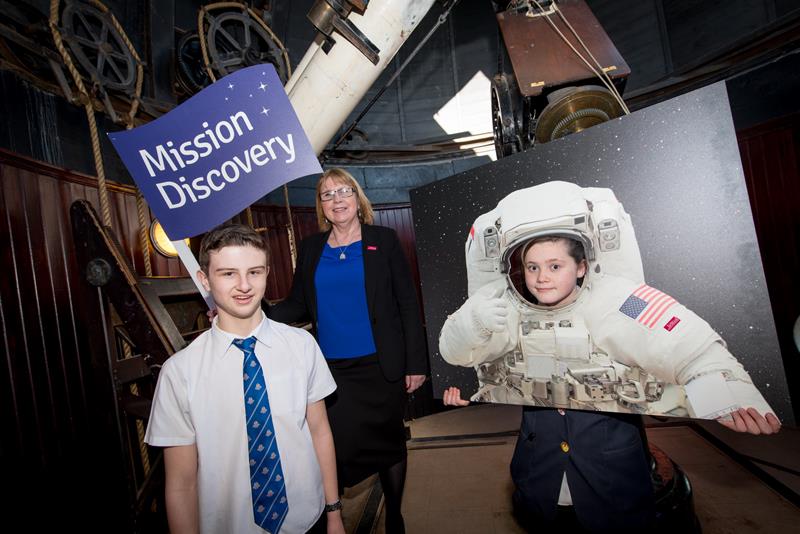 Plans have been launched for a pioneering space school which is coming to Renfrewshire for the third time this summer. Over 150 pupils will work in teams with a panel of space experts to design an experiment with the winning concept being launched into space and conducted by astronauts living on the International Space Station.

Much of the programme’s appeal lies in the personal involvement of NASA astronauts who are present throughout the event and engage with the pupils and the local community.

This year is no exception and there is bound to be huge interest in the participation of Mike Foale, the British-born astronaut who has spent 375 days in space.

Mike’s career saw him have to react to the dramatic impact of a cargo ship ramming the Russian space station Mir which he was on in 1997.

A group of pupils from Paisley Grammar joined Councillor Jacqueline Henry, Convener of Renfrewshire Council’s Education and Children Policy Board, at Coats Observatory in Paisley to launch this year’s event.

For the first time, pupils from East Renfrewshire and Inverclyde will join pupils from Renfrewshire in the Mission Discovery programme which runs from 6th to 10th June at the Paisley Campus of the University of the West of Scotland (UWS).

“Once again the academic programme will be backed up by opportunities for involvement for the community and business groups.”

Professor Craig Mahoney, UWS Principal & Vice-Chancellor, said: “The Mission Discovery project is one of the most innovative programmes we’ve ever been involved with at UWS. It is vital that as a university we promote and nurture the development of science, engineering, technology and mathematics capability in students.

“We want to develop and encourage the best talent in these areas and this project goes a long way towards achieving this goal. UWS is delighted not only to support the Mission Discovery project for the third year running, but also to be hosting this year’s event at our Paisley Campus.”