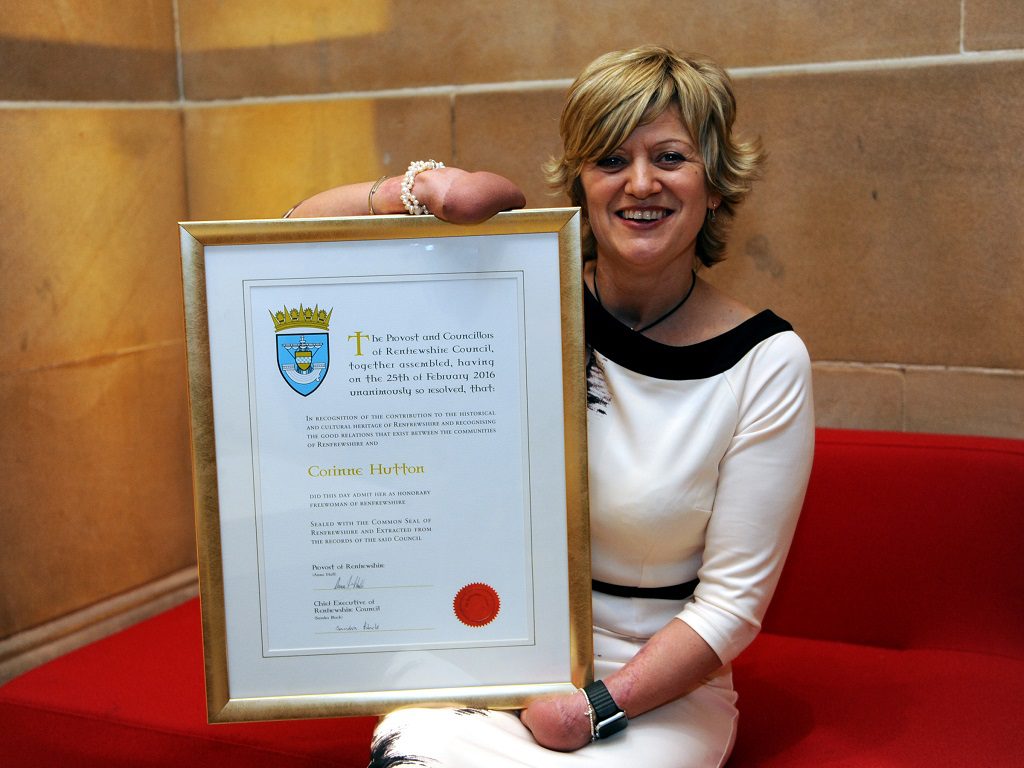 One of Renfrewshire’s charity champions will preside over more than 4,000 of the world’s best pipers and drummers when they arrive in Paisley at the weekend.

Corinne last year with her Freedom of Renfrewshire award

Quadruple amputee Corinne Hutton, 47, who started the Finding Your Feet charity, will be event chieftain for the British Pipe Band Championships on Saturday.

She will greet more than 140 pipe bands from as far afield as Canada and Denmark when they gather before her for the final march-past and prize-giving at the event, to be held in the St James Playing Fields.

The Championships are free to attend, run from 10am to 7pm, and are taking place as part of the push towards Paisley’s bid to be UK City of Culture 2021.

Corinne, from Lochwinnoch – who made history as the first quadruple amputee to climb Ben Nevis – was also awarded the Freedom of Renfrewshire last year in honour of her fundraising work.

The mum of one said: “I am absolutely delighted to be involved and it was lovely to be asked – I am really looking forward to it.

“It’s a whole new ball game for me, although my brother did play the pipes and my son is now at that age where he might want to start playing a musical instrument.”

Corinne was invited to be event chieftain in recognition of her work to support hundreds of other amputees, inspired by her own near-death experience caused by sudden illness three years ago.

As she explained: “In June 2013 I was fighting for my life and losing – I had a bad cough and it turned into pneumonia and then blood poisoning.

“At first I couldn’t find any real help and started to feel a bit useless and that I could no longer get a job.

“But my way to fix all of that was by starting a charity called Finding Your Feet which aims to help amputees.

“So far we have worked with more than 150 of our troopers up and down the country by supporting them to get out and take part in activities – we are in Glasgow and Dundee and are looking to branch out into England.”

Attractions at the championships on the day include a bar, food market, the Slug in a Bottle craft market, Highland dancing competition and children’s entertainment zone.

There will be no parking at the site – other than for pipe band coaches – but free shuttle buses will run to and from the free event parking sites at the Paisley 2021 Stadium (Greenhill Road) and West College Scotland (Renfrew Road).

There will also be a free shuttle bus running to and from Paisley Gilmour Street station (Old Sneddon Street entrance) for anybody arriving in town by train. All three shuttle buses run every 15 minutes from 8am to 7.30pm.

More event information is on www.paisley2021.co.uk and a full list of bands and times can be found at www.rspba.org

Glasgow News? Daily Updates part of our network
Here’s How to Create a Family Budget You Can Live With