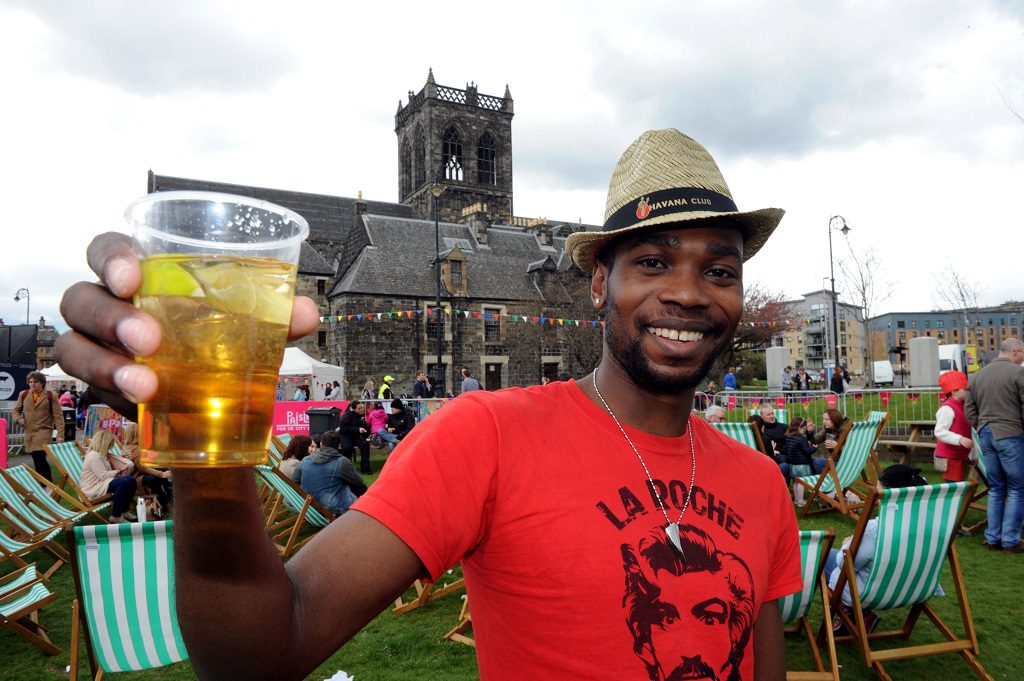 Visitors will be able to sample tasty treats from more than 30 street food traders and producers at the free Paisley Food Festival this Saturday 22 April at Abbey Close from 12 to 7pm. Now in its third year, the festival will showcase the breadth of Scotland’s vibrant street food scene, with traders using the very best seasonal ingredients and sustainably sourced produce in their dishes. This event also forms part of the push for Paisley’s bid for UK City of Culture 2021 which will be submitted at the end of the month.

The event is running alongside Scotland’s largest beer and ale festival, the 30th annual Paisley Beer Festival, which is run by Renfrewshire CAMRA, launched earlier this week and will be at Paisley Town Hall until Saturday 22 April. The event has a wide selection of producers serving hand reared produce, including The Kitchen Farmer from Perthshire with their gourmet lamb burgers, and outdoor reared pork and apple burgers from Duntarrin Farm in Argyll. In addition Alba Seafood will be showcasing their delicious fresh smoked seafood and fishcakes while Geraldo’s of Largs will be offering the best in Scottish craft spirits to enjoy at home. For those with a sweet tooth there are exquisite French patisseries from les Plaisirs d’Odette and scrumptious cakes from the Three Sisters Bake.

Serena Durante, from Porrelli, said: This is the first time Porrelli has taken part in the festival and we’re really excited to serve our delicious Churros, it is something new that complements our ice cream well, and we know the visitors will love it! It’s a great event.”

Matthew Stevenson from Linburn’s Farm, said: “Some of the best food in Scotland is made right here in Renfrewshire and the festival gives us a chance to celebrate that. It also gives people the opportunity to try new foods from producers and traders from further afield.

“We are looking forward to serving up our famous Paisley Buddie burger which we’re sure will be popular on the day.”

David Cassidy, of Renfrewshire CAMRA, added: “We are all looking forward to this year’s beer festival, and the organisers are buzzing.

“The selection of beers will be bigger than ever – we have more than 200 real ales and another 100 or so beers at the foreign beer bar.

Also confirmed to attend the event are Masterchef: The Professionals winner Gary Maclean, who will host a series of cooking demonstrations, and CBeebies star Katy Ashworth who will entertain children and families throughout the day and give them the chance to participate in fun, interactive games, stories and sing-a-long songs. The Voice finalists Into the Ark are also confirmed as the headline music act for the event performing their first gig since appearing on the show.

Also taking place this week is Paisley Restaurant Week which is being delivered by local business improvement district Paisley First and will be running until 23 April, with discounts and deals available at eateries throughout the town centre including Cardosi’s, Hamishes Hoose and Saporito Restaurants.