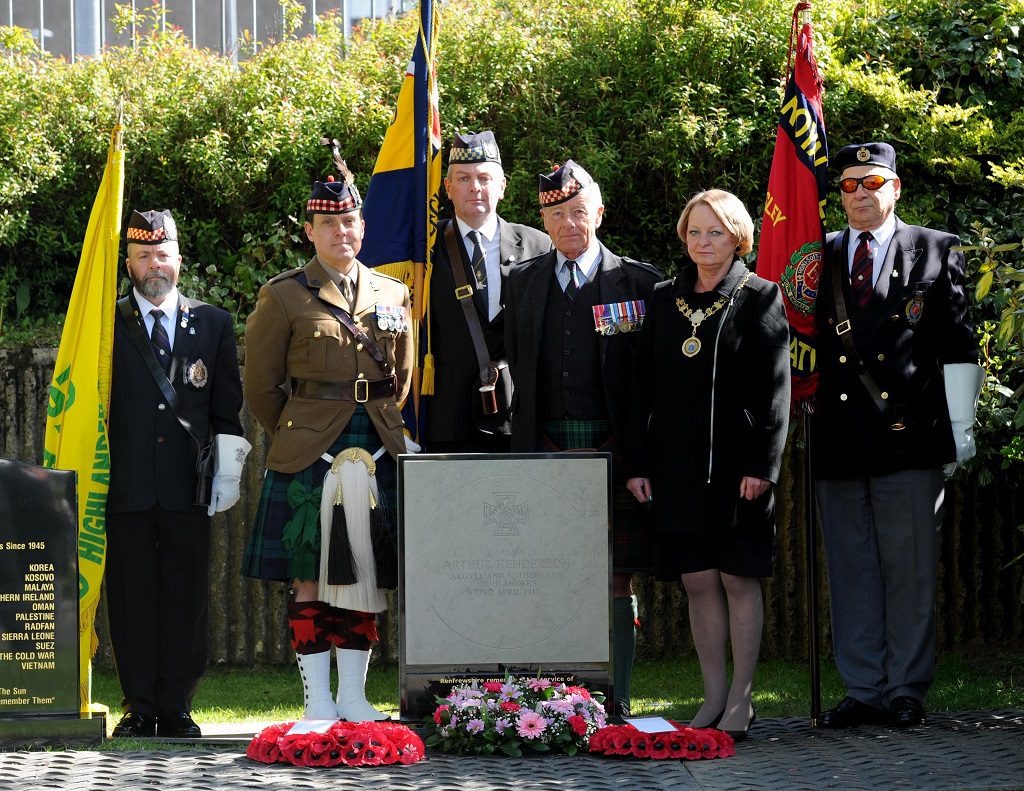 A Paisley-born solider who was awarded the Victoria Cross (VC) for ‘most conspicuous bravery’ during World War 1 has been honoured in a special ceremony in Renfrewshire today. 2nd Lieutenant (Acting Captain) Arthur Henderson V.C, M.C was awarded the VC for his efforts in leading his Company though the enemy front line, despite almost immediately being wounded, to their final objective- after which he sadly lost his life. A commemorative stone was unveiled in the grounds of Renfrewshire House as part of a national campaign to honour the bravery of VC recipients from WW1 and provide a lasting legacy of local heroes within their communities. A short service was led by Renfrewshire’s Provost Anne Hall who joined Officer Commanding Balaklava Company Maj C M Wood, The Argyll and Sutherland Highlanders, 5th Battalion The Royal Regiment of Scotland and Colonel DG Ross OBE, Chairman of the Argyll and Sutherland Highlanders Regimental Association in giving a short speech and laying a ceremonial wreath to mark the unveiling.

Provost Hall said: “Arthur Henderson gave the ultimate sacrifice for our country and all of Paisley, and Renfrewshire, should be proud of his roots in the area.

“He battled through the most difficult of adversity to ensure the safety of his fellow soldiers and fully deserves the recognition which has been bestowed upon on him.

“The commemorative stone will allow residents in the area to gain a greater understanding of how Paisley was a part of the First World War and ensure soldiers like Arthur are always remembered.”

Acting Captain Henderson was born in 1893 in Paisley and went to school locally, being educated at John Neilston Institute before moving into employment as an apprentice accountant in Glasgow.

Before the war he was a well-known cricketer and donned his whites for Ferguslie Cricket Club- where his VC medal ribbons and portrait hung in the clubhouse before being moved to Stirling Castle in the late 1980s.

He enlisted with Argyll and Sutherland Highlanders where he attained the rank of 2nd Lieutenant before becoming Acting Captain of the 4th Battalion.

His heroic deed of bravery took place on 23 April 1917 near Fontaine-les-Croisilles in France and he now lies in Cojeul British Cemetery, Saint-Martin-sur-Cojeul- and is remembered at both Paisley Abbey and the War Memorial in Gordon, Berwickshire in the Scottish Borders.

Colonel R L Steele TD DL, Royal Regiment of Scotland, said: “Sadly, we were unable to locate any of Arthur’s blood relatives and thus, it was only fitting that he was surrounded by members of The Argyll and Sutherland Highlanders Regimental Association, who are his present-day regimental family and brothers-in-arms.

“Speaking for The Royal Regiment of Scotland and as a veteran of The Argyll and Sutherland Highlanders, we are all immensely proud of Captain Arthur Henderson VC MC and salute his memory – his cheerful courage and outstanding leadership is a splendid example to all who have served and will serve in the future.”