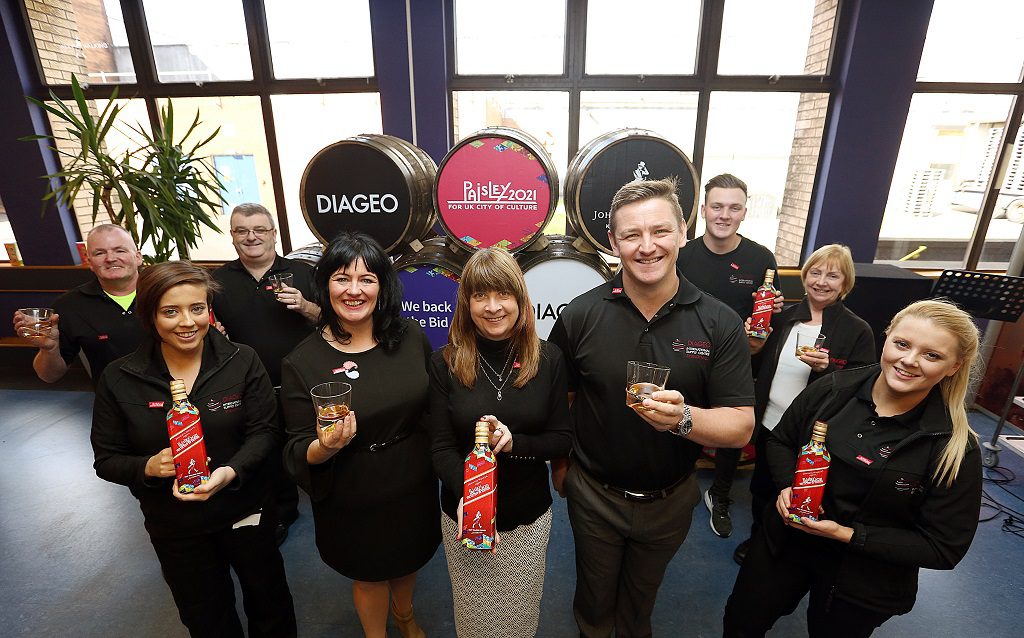 Workers at the world’s biggest Scotch bottling plant raised a glass to Paisley’s bid to be UK City of Culture 2021– with specially-produced bottles of Johnnie Walker whisky. Some of the team behind the Paisley 2021 bid – to be lodged with the UK Government this week – visited the Renfrewshire base of drinks giant Diageo, the latest major business to back the town’s ambitions.

Aside from the limited-edition bottles, Diageo are one of a number of major local businesses who have agreed to donate £20,000 to meet the costs of hosting the title. Paisley 2021 bid director Jean Cameron met some of the staff at the plant – while the 2021 team surprised staff in the canteen with musical performances.

The Paisley 2021 Johnnie Walker bottles are not currently available to the public, but a small limited edition will have been produced at a later date.

Paisley will lodge its bid with the UK Government’s Department for Culture, Media and Sport later this week. The town is bidding for the title as part of wider plans to use its unique cultural and heritage story to transform its future.

Jean Cameron said: “Paisley’s bid to be UK City of Culture 2021 has had incredible backing to date from across the local community – so far, more than 30,000 people have taken part in the conversation around it.

“Along the way we have had wonderful backing from local businesses – with almost 200 to date publicly supporting the bid.

“That includes major local employers of international importance assigning uop as bid sponsors – including Glasgow Airport, WH Malcolm, intu Braehead, Gordon Leslie Group and Coats PLC – and we are thrilled to add Diageo to that list.

“Today we are part of that living heritage, making the most traditional of Scottish products, Scotch whisky here in Renfrewshire. We’re delighted to support Paisley’s bid to be UK City of Culture in 2021 and we wish the team every success.”