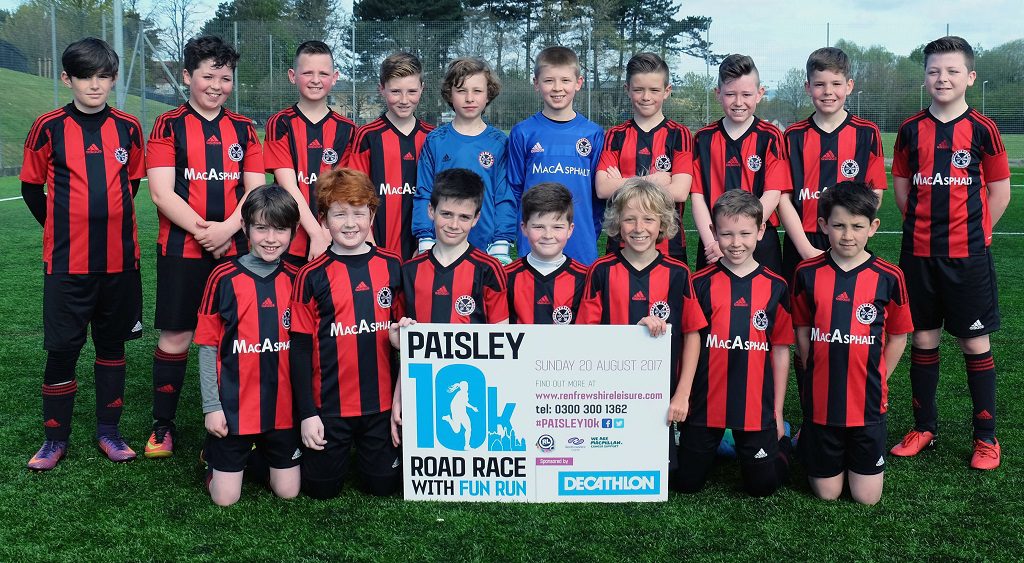 YOUNGSTERS from a Paisley youth football team are right on the ball when it comes to raising money for club funds. St Peter’s Boys Club 2006 team who have singed up en masse for the Fun Run after the Paisley 10k Race.

The St Peter’s Boys Club 2006 team is the first large group to sign up for the Fun Run that takes place immediately after the Paisley 10k Race, on Sunday August 20.

There will be 44 boys and adults representing the club taking part.

This is the fourth year the St Peter’s lads have taken part in the Fun Run and club officials are hoping to raise as much as £1000 to help pay for football kit and the cost of running the successful team.

Now other football teams and sports clubs are being encouraged to do the same and join in the fundraising bonanza by being sponsored to complete the Fun Run course around Paisley town centre.

Anyone can now register for the Paisley 10k Race or Fun Run, which is sponsored by sports and outdoor retailer, Decathlon. Last year 3000 people raced around the streets of Paisley in the 10k Race and hundreds more followed in the Fun Run.

Joyce McKellar is chief executive of Renfrew Leisure who are organising the Paisley 10k and Fun Run in conjunction with Renfrewshire Council. She said:

“Taking part in the Fun Run is a great way to raise money for sports clubs and good causes.
“Not only will it bring in much needed cash to help run sports clubs, it’s fun for team members to do something different and everyone enjoys taking part.
“Well done to the boys from St Peter’s for doing the Fun Run for the fourth time and I hope they get lots of sponsorship from family and friends for their efforts.”