To celebrate this monumental anniversary the team behind Paisley’s bid for UK City of Culture 2021 are calling for the people of Renfrewshire to share their memories and pictures of the Russell Institute.

A category A-listed building it is one of Paisley’s architectural treasures. The building, which is distinctive for its stone and bronze sculptures, was commissioned by Miss Agnes Russell who wanted to build a child welfare clinic as a memorial to her two brothers, Mr Robert Russell and Mr Thomas Russell.

The building was officially opened on 19th March 1927 by H.R.H. The Princess Mary (Viscountess Lascelles). It was latterly used as a health centre until it closed its doors in 2011 and has remained a striking feature of the town centre. 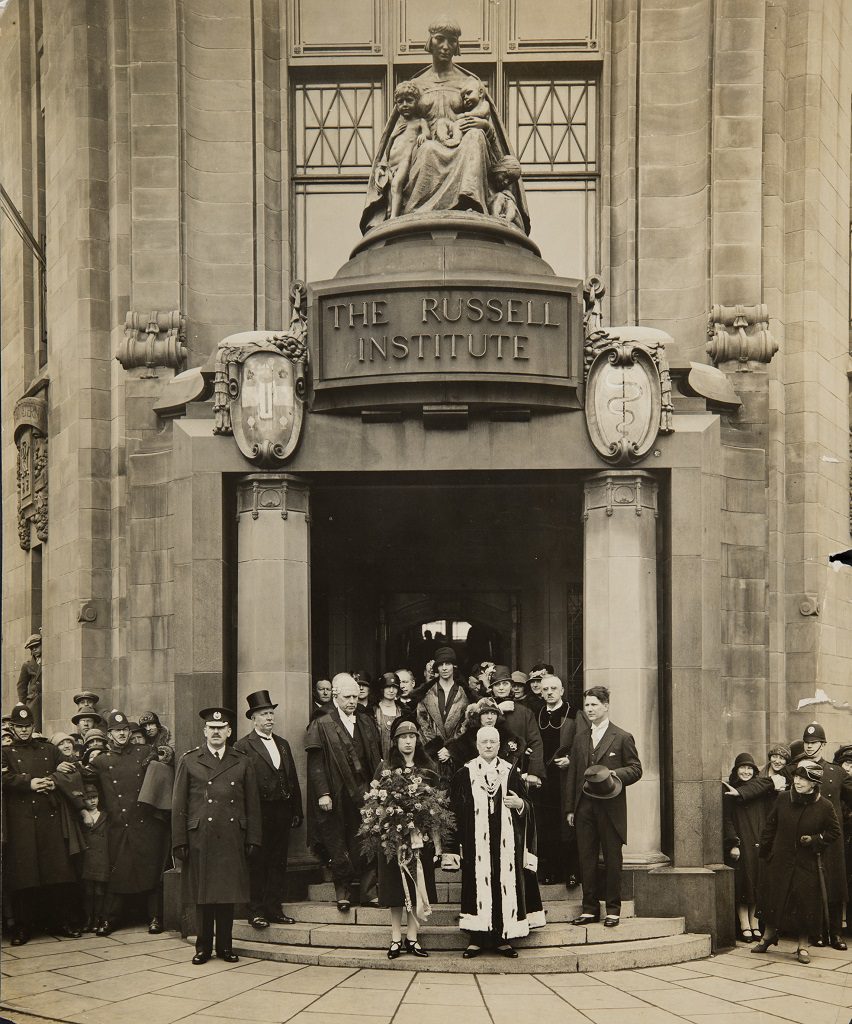 Official photograph of the opening of the Russell Institute by Princess Mary with Provost Crawford.

Looking towards the entrance and along both sides of the building. Image has ‘The Russell Institute, Paisley, Opened by H.R.H. Princess Mary, 19th March, 1927’

Men working at the top of the Russell Institute building, showing the detailed stonework.

Throughout its years of operation the ethos of the Russell Institute was to help parents keep their children fit and healthy and to diagnose and treat diseases at the earliest and most curable stages.

The purpose of the Russell Institute is evolving. The building will soon serve as a Skills and Employability Hub in the heart of the town centre following a restoration project funded by Historic Environment Scotland, Scottish Government Regeneration Capital Grant Fund and Renfrewshire Council,  continuing the initial commitment to support the people of Paisley and beyond.

There are many people throughout Renfrewshire who have memories of visiting the building for a range of reasons including x-rays, baby weigh-ins and injections, vaccinations and dental appointments.

Donald Mack (67) from Paisley has very different memories of the Russell Institute. His father, Samuel Mack, was the caretaker for the building for more than 32 years and from 1955 to 1970 Donald called it home.

He said: “I lived in an apartment at the top of the Russell Institute with my parents, two brothers and sister for 15 years. It was a wonderful place to grow up, it was a great playground for me and my siblings.

“I remember falling off the bannister of the marble staircase once or twice from sliding down it with my brothers. My dad also used to make things for our home in the boiler house so we spent a lot of time there seeing what he was building.

“It was in a great location to soak up all the activity going on in the town. I remember the old trams riding past and we could see people dancing in the evenings across the road in the Co-Op building – there was always a lot to see.

“One of the strongest memories I have is of the big parade in 1959 when St Mirren won The Scottish Cup. We had a great view of all the celebrations going on in Causeyside Street – it was great.”

“We have a beautiful architectural legacy here in the town – the highest concentration of listed buildings of anywhere in Scotland outwith Edinburgh.

“The Russell Institute is one of the best examples of that and it is more than a building – it is part of the cultural fabric of the town. I remember my mum taking my brother and I there when we were small and thinking at the time how magical and beautiful the place was.

“Generations of buddies will have their own stories to tell and we want to mark the anniversary by helping tell them, so please get in touch with your Russell Institute memories.”

Celebrating the building and sharing stories and memories from its history complements Paisley’s bid for UK City of Culture.

If you wish to share your memories and images of one of Paisley’s most distinctive architectural gems please emailhello@paisley2021.co.uk.