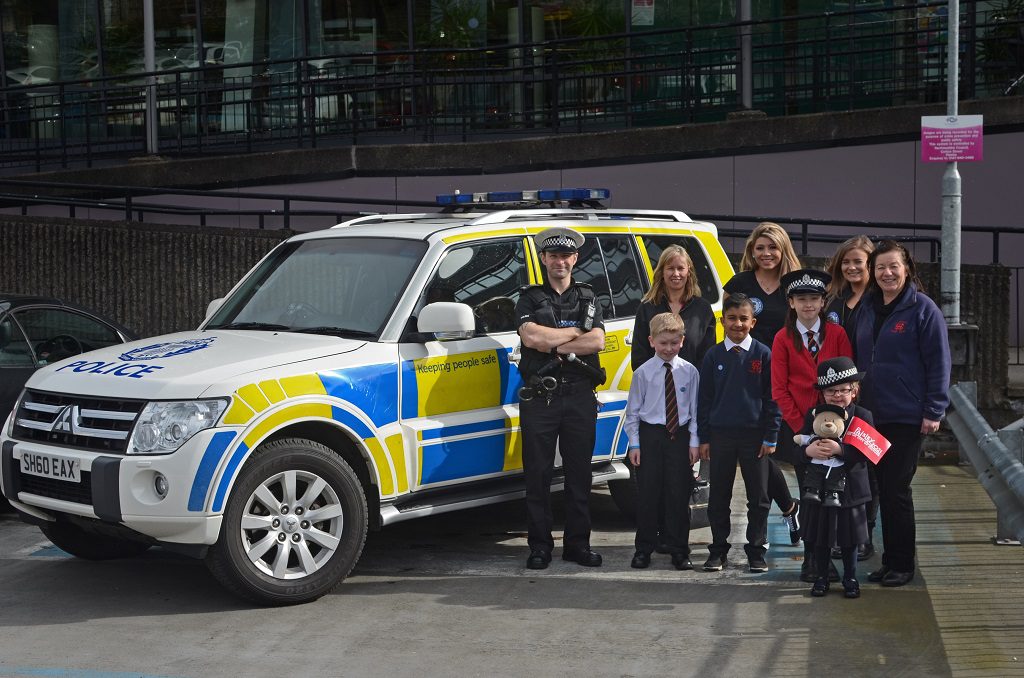 Renfrewshire schoolchildren are set to learn about disability, bullying, hate crime and Keeping Safe with some help from a special safety mascot.

A new awareness programme by the Keep Safe initiative, developed by Renfrewshire community group I Am Me Scotland and Police Scotland, will see mascot Keep Safe Sam visit primary schools in the area to promote safety messages for children.

Members of I Am Me/Keep Safe will head out on a new tour of local schools to raise awareness from April of this year until March 2018.

To mark the initiative, the loveable bear was joined by pupils from Williamsburgh Primary School and Sergeant Kenny Malaney from Police Scotland for a special launch event at Renfrewshire House, Paisley.

KeepSafe Sam was also helped by a blast from the past at the event, as he appeared in a vintage, mini Hillman Imp.

The vehicle, previously built in Linwood, once belonged to much-loved police road safety mascot PC Shiny Buttons and is now kept in the Paisley museum store.

With that in mind, the Keep Safe programme are backing Paisley’s bid for UK City of Culture 2021, which aims to use the town’s unique heritage and cultural story to transform its future.

I Am Me Scotland project manager Carol Burt said: “It is important that children understand the range of disabilities and the importance of treating everyone with dignity and respect.  The Keep Safe initiative aims to work with a network of local businesses to create ‘Keep Safe’ places in the community for anyone feeling lost, scared, vulnerable or who has been a victim of crime.

“We are also delighted to back Paisley’s bid to be UK City of Culture in 2021, PC Shiny Buttons visited primary schools with his Hillman Imp throughout the eighties and it is nice to be able to use a small and fondly-remembered part of Renfrewshire’s heritage.”

The event was a partnership with Roar: Connections for Life (formerly known as Reaching Older Adults in Renfrewshire), who won an award from Police Scotland for a joint road safety programme with older people across Renfrewshire.

Roar: Connections for Life general manager Nicola Hanssen said: “It’s crucial that we promote road safety and personal safety to people of all ages throughout Renfrewshire, however, we know that the oldest and youngest in our communities tend to be the most vulnerable.

“We are working in partnership with Police Scotland to look after people for as long as possible. Road and personal safety is not just for children, it’s about giving people the knowledge to keep safe for life.”