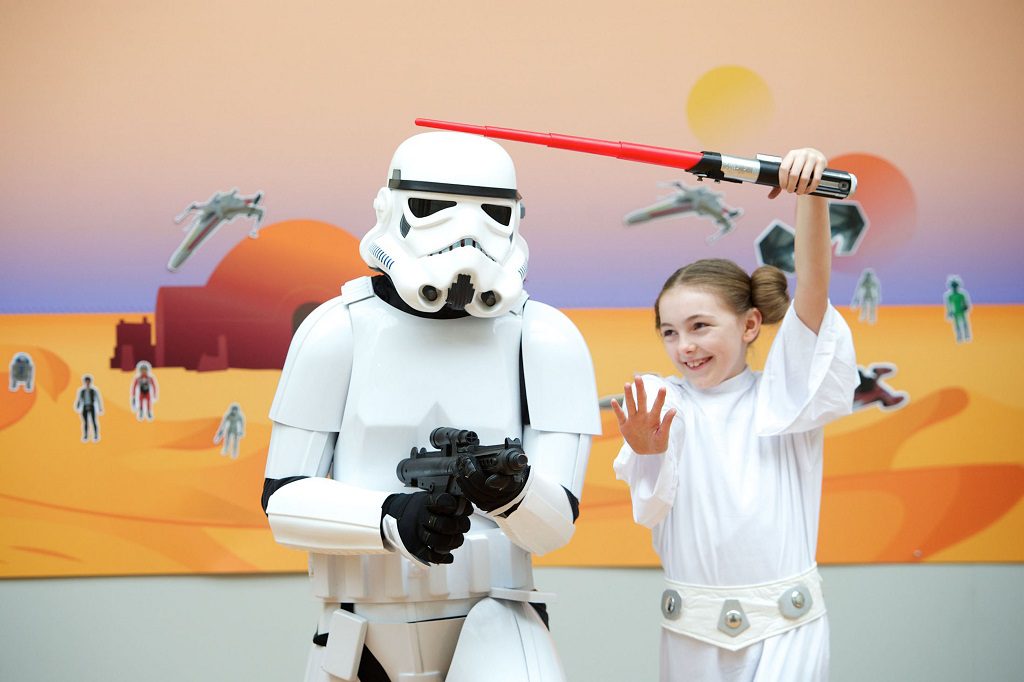 A REAL-LIFE Princess Leia yesterday launched a unique exhibition of Star Wars toys and memorabilia that has come to Scotland for the first time.

Leia Brown, aged 10, from Paisley, who was named after Princess Leia, launches a Star Wars toys exhibition at Paisley Museum

Leia Brown isn’t just named after the space heroine from a galaxy far away, she was also born on May 4, which is known by fans as Star Wars Day – as in ‘may the fourth be with you’!

And the force was definitely with ten-year-old Leia when she got a sneak preview of the May The Toys Be With You exhibition, at Paisley Museum. Click site.

Leia Brown, aged 10, from Paisley and Star Wars toys collector, Matt Fox at the launch of the May The Toys Be With You exhibition at Paisley Museum

Shortly after Leia was born, her Star Wars fan dad, Peter persuaded mum, Paula to name her after Princess Leia. And after seeing the movies over the years she was growing up, Leia loves Star Wars as well.

The May The Toys Be With You exhibition is free and open from today, Saturday, March 18 until May 29.
The exhibition features one of the UK’s finest collections of vintage Star Wars toys, original cinema posters and memorabilia. It also includes fun family activities and additional Star-Wars related workshops during the Easter holidays.

Leia said: “I love everything about Star Wars and I’m always dressing up as Princess Leia. I’m glad mum and dad gave me that name.

“I’m really excited about May The Toys Be With You and being chosen to launch the exhibition. It’ll be great fun as it’s got lots of amazing toys and things about Star Wars to see.”

The collection of more than 400 exhibits and worth £100,000 is owned by 44-year-old Star Wars enthusiast Matt Fox, from Canterbury, in Kent, who was given his first Star Wars Darth Vader figure by his parents on his fifth birthday.

He said: “I can still remember sitting in the back of the car so excited and ripping open the packaging to get my hands on the Darth Vader figure.

“My love affair with Star Wars began when I saw the first movie in 1977 and from that day all I would ask my parents at birthdays and Christmas as a present would be Star Wars figures.

“This was in the days before we had videos to watch the movies again and again and the only way kids could recreate the adventures they saw in Star Wars movies was to play with the figures.

“My galaxy was under the dining room table!”

As a teenager Matt stopped asking for Star Wars toys, but years later, as a 28-year-old, he was in the loft of his parents’ home and came across a big box. When he opened the box he was amazed to see all his Star Wars toys had been kept safely by his parents.

“I looked into the box and it was like a golden glow of nostalgia beaming up at me,” he revealed. “It was quite an emotional moment and that’s when I started to seriously collect Star Wars memorabilia again.

“They say collecting is an illness and sharing is the cure and that’s what I want to do with this exhibition – let as many people, young and old, experience the same excitement as I have about Star Wars.”

One of the most rare exhibits on show at Paisley Museum is an original painting by artist Tom Beauvais, from 1977, as the poster for the very first Star Wars film.

However, his painting never appeared as the movie poster, as an illustration by his colleague, Tom Chantrell was used instead.

Chief executive of Renfrewshire Leisure, Joyce McKellar said: “This exhibition is a must-see for all Star Wars fans.
“It’s a celebration of the now highly-collectable vintage toy line and also of the iconic design work and art of the Star Wars movies.”

Paisley City of Culture 2021 Bid Director Jean Cameron said: “The Star Wars films remain as iconic and popular as ever and I am sure there will be huge interest in this exhibition at Paisley Museum over the next few months,

“That will bring visitors to the town and help raise awareness of Paisley’s wider cultural offer.
“Our outline programme for Paisley 2021 will be open and accessible, and will bring culture for all – and this exhibition is a great example of what that could mean. May the Force be with Paisley’s bid!”

Glasgow News? Daily Updates part of our network
Innovations and Innovators of Scotland – a proud history