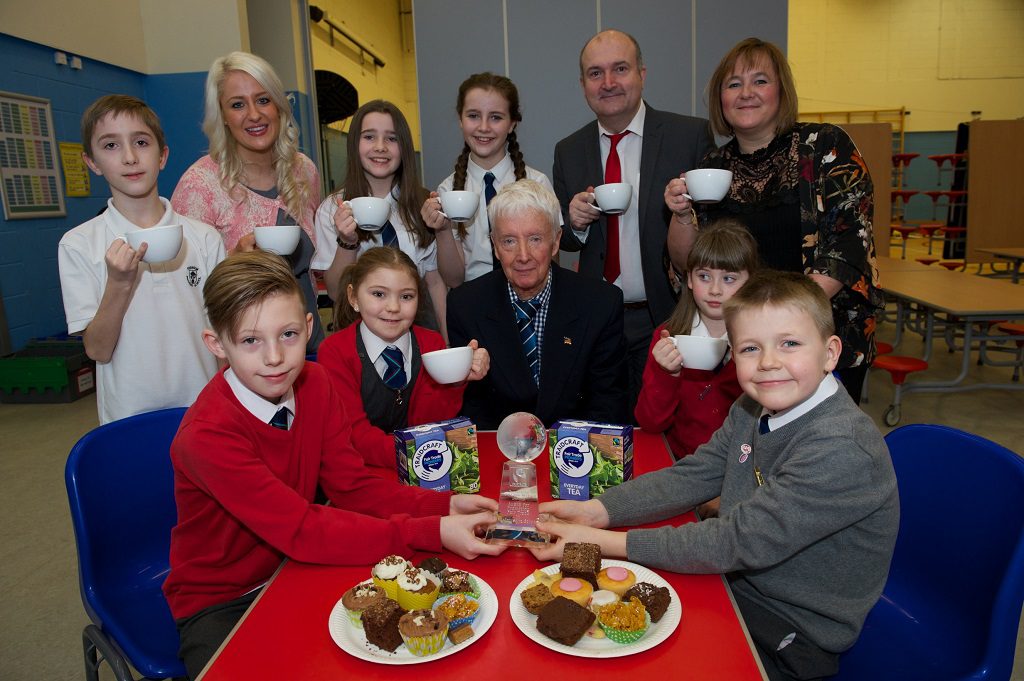 Todholm Primary have been crowned Renfrewshire’s Fair Trade Primary School of the Year after their work incorporating the subject into their School Improvement Plan (SIP).

The annual John McDowall Award was created by former Provost McDowall to reward the primary school who has shown the greatest commitment to fair trade across the year.

Taking the crown from last year’s winner, St James Primary in Paisley, Todholm were the recipients after holding a number of events within the school as well as embedding the topic into the curriculum.

The school have set up a committee which consists of staff members and pupils for across all stages and classes of the school.

The committee have shown their dedication by holding a ‘Big Breakfast’ during Fairtrade Fortnight, hosting stalls from local fair trade organisation Rainbow Turtle and organising assemblies delivered by both the Senior Management Team and Rainbow Turtle.

The school were also awarded funds by Renfrewshire’s Dragons Den to produce a cook book full of healthy, fair trade recipes to be sold to school stakeholders. The money will also help to fund ‘Todholm Tearooms’- an intergenerational community cafe.

The school have also achieved the Fair Active Award from the Fairtrade Foundation and are currently working towards achieving the highest possible award- Fair Achiever.

Councillor Jim Sharkey, Chair of the Renfrewshire Fair Trade Steering Group, said: “The message of fair trade is one of real value to our children as it allows them to appreciate what they have through learning of the struggles others face across the world.

“By learning the process of how food and products make into our stores, the children learn why it is essential that those at the beginning of the chain are paid a fair price.

“It’s important that we reward the schools in Renfrewshire that are incorporating fair trade into school life and I would encourages every school to work towards trying to win the award next year.

“My congratulations go to Todholm for the fantastic work they have completed this year.”

John McDowall said: “I’m extremely passionate about fair trade and believe that the way to change the injustices in the world is through our children.

“It is important the next generation are set on making the world a fairer place and they can learn these ideals through learning about fair trade in school.

“Todholm have undertaken fantastic work this year and I’m delighted they have won this year’s trophy.”

Todholm Primary School Head Teacher, Lynne McGinn, said: “We are delighted to receive this award which recognises the hard work and dedication of our staff and children.

I am so proud of our school- in particular the members of the Fair Trade Committee- who have demonstrated commitment to the variety of fair trade events that have taken place in the school.

“Following on from being awarded Fair Active status, we are confident we can achieve the prestigious Fair Achiever Award in the near future.”

Fairtrade Fortnight 2017 begins on Monday 27 February to Sunday 12 March and this year’s theme is ‘Take a Break’ for fair trade.

For further information on Fair Trade in Renfrewshire, visit www.renfrewshire.gov.uk/fairtrade.