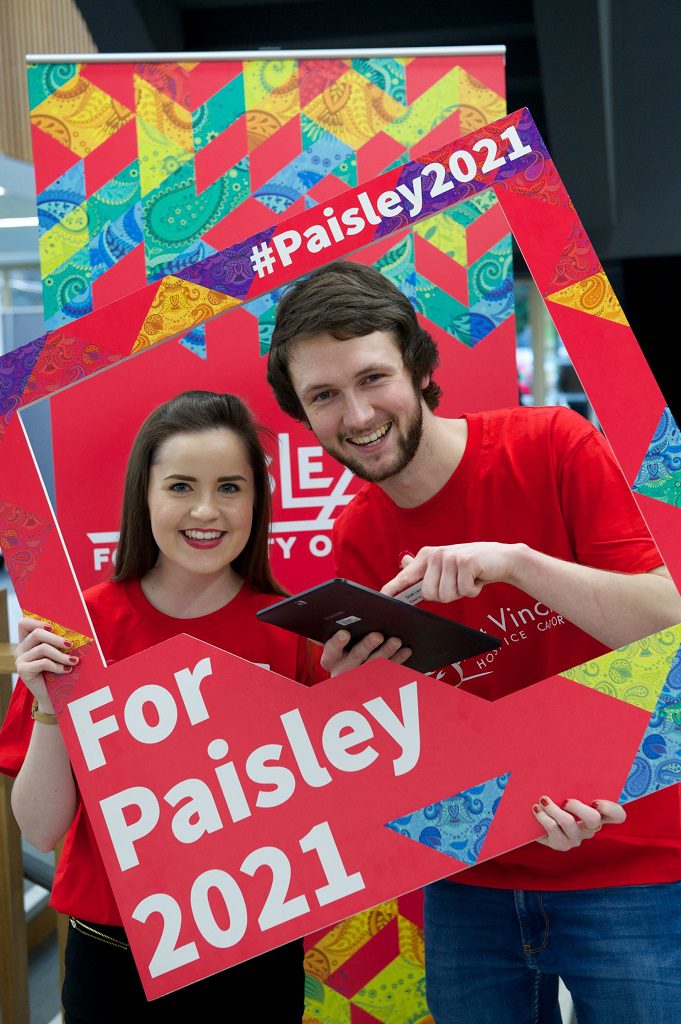 Paisley’s bid to be UK City of Culture 2021 just passed another magical milestone – after 2021 people signed up to back it online.

The bid website at paisley2021.co.uk has had an option for residents to ‘push the button’ to register their support since the start of November.

And University of the West of Scotland music student Scott Lever – one of the team who organised the uni’s Scottish Music Festival, taking place today – was the man who helped tip the total over the line.

The first ever music festival at the university saw a number of performances in the Atrium and Brough Hall throughout the day.

The festival was headlined by local band Lemonhaze, who recently won a nationwide competition to open for Paolo Nutini before a crowd of tens of thousands at Edinburgh’s world-famous Hogmanay street party.

And Scott and fellow events management student Nyree Marsh, both from Greenock, were delighted to add their names to the thousands who have already backed the bid online,

“Paisley has so much going on, with the Monte Carlo Rally next week and the Scottish Album of the Year coming back, plus there’s so many good bands.

“The music festival came about when we were asked to put an event on with some bands in the Atrium as part of our course – word got out and it started to grow and we added in guest speakers and people from the Scottish music industry.”

Councillor Mark Macmillan, Renfrewshire Council leader and chair of the Paisley 2021 partnership board, added: “For Paisley 2021 to reach 2021 online backers in less than three months just shows the depth of support here in the town.

“That number can be added to the almost 10,000 who have already taken part in conversations around the bid online or at one of our events.

“So it was fitting the 2021st backer was Scott – someone who is doing great work to help showcase the great musical talent we have in the town.

“But the drive for support doesn’t stop here – for us to have a chance of winning we need people to help us show the judges at DCMS that the people of Paisley want the bid and can make it happen.

“You can push the button at paisley2021.co.uk now – let’s see how many we can get to show their support by the time the bid is lodged in April.”

Is vaping safe?
Scroll to top