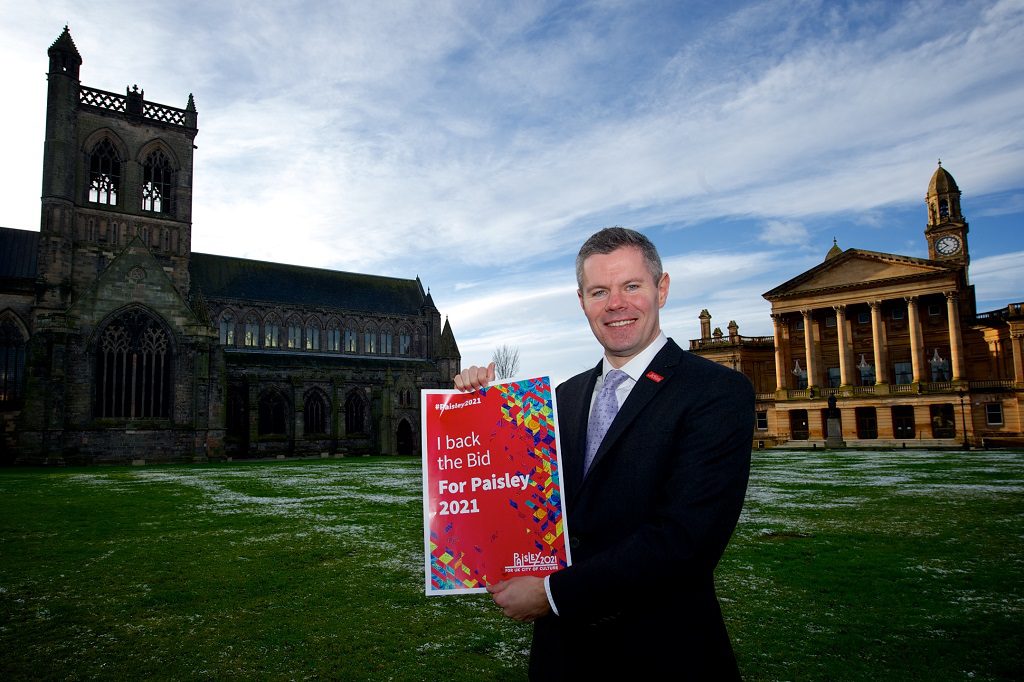 Paisley’s bid to be UK City of Culture 2021 has had some more high-level backing – after local MSP Derek Mackay threw his weight behind the town’s ambitions.

In the latest show of cross-party support for the bid, Renfrewshire North and West MSP Derek says the town deserves the title and believes the Paisley 2021 campaign has ‘captured the imagination’ of people across the area.

Derek – also the Scottish Government Cabinet Secretary for Finance and the Constitution – was speaking during a series of videos now available on the Paisley 2021 YouTube channels.

He said: “I am very positive about Paisley and always have been – it’s the town I was born in. I think Paisley is very deserving to win UK City of Culture 2021– it has the passion, the pride and the people.

“The events that are taking place are wonderful and they’ve grown over a number of years – there is a sense of that cultural renaissance making a difference.

“It’s a fantastic, positive, energised campaign which is all about people, and people should be involved in whatever way they can.

“Be part of it and enjoy it as well because the bid is about being positive about Paisley and it’s great fun too.”

Paisley’s bid is due to be lodged at the end of April with the competition organisers, the Department of Culture, Media and Sport – and the town will find out if it has made the shortlist in the summer.

The bid has already received cross-party political backing at well-attended parliamentary receptions at both Westminster and Holyrood.

Over the next few months, bid leaders will be pushing ahead with plans to generate as much local-level support for the campaign as possible.

“Over the past year, thousands of local people have taken part in conversations around the bid to help shape it, and we recently saw the 2021st person ‘push the button’ on our website to support for the campaign.

“A successful bid could help transform Renfrewshire’s fortunes – but for that to happen we need even more of you to help show the judges that Paisley wants the title, needs the title, and can deliver it.

“You can find out more about how you can get involved at paisley2021.co.uk.”

Pupils show their artistic side for major exhibition
Scroll to top