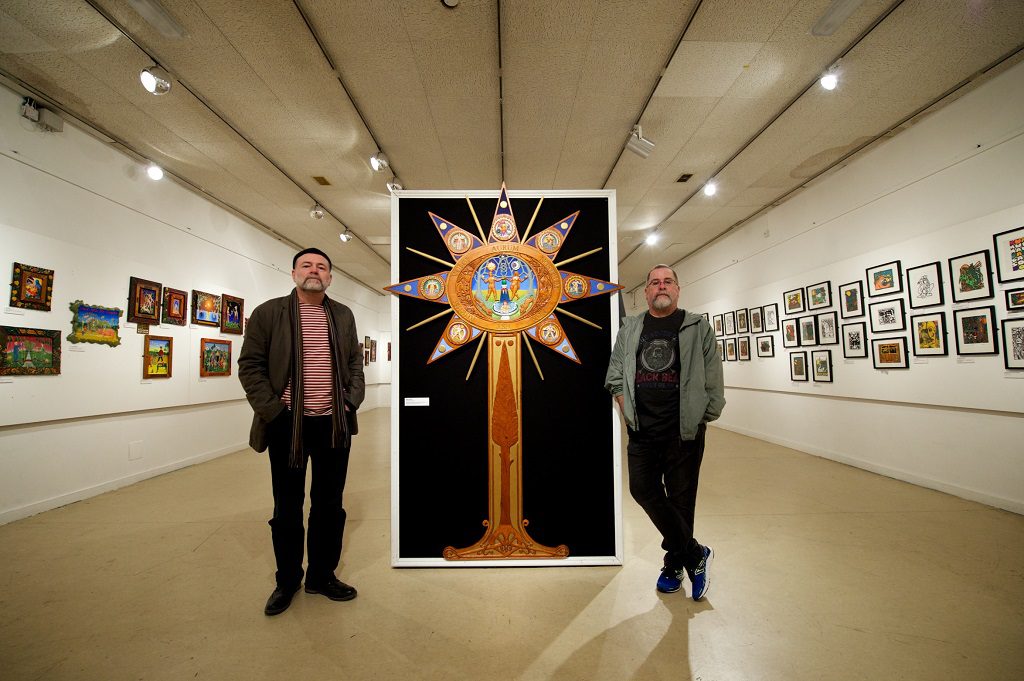 AN art exhibition featuring the work of two Paisley-born brothers, Kevin and Dermott Egan has opened in the town’s Museum and Art Galleries.

Kevin Egan and his brother, Dermott at their art exhibition in Paisley Museum and Art Galleries.

Much of the brothers’ paintings, drawings, carvings and sculptures relate to their working class roots growing up in both Paisley’s Ferguslie Park and Glenburn housing schemes.

The free exhibition, Form and Colour: A Way of Being in the World, runs until February 26.

Kevin, 61 and 57-year-old Dermott come from a very creative family. Their brother Tommy was a well-known folk singer locally and their late brother, Jim was also an accomplished singer of folk music and popular standards of the 1950s and 60s, appearing on radio and television.

Another brother, Joe enjoyed chart success in the music business as one half of the band, Stealer’s Wheel along with fellow-Paisley singer-songwriter, Gerry Rafferty.

Following a college course in commercial art, Dermott worked for different artistic agencies producing posters for venues like The Pavilion and King’s Theatres, in Glasgow. Some of his early artistic work in this field can be found in the Mitchell Library archive.

Kevin’s early work was in polychrome bas relief and free standing sculpture. His relief carvings – produced for the Marquis of Bute – can still be seen at Mount Stuart House, on the Isle of Bute. One of these particular pieces was shortlisted for the Saltire Prize.

Kevin said: “All our family were good at art and at the same time all of us, including Dermott and I were also musical and could sing.
“I suspect that on a subconscious level, Dermott and I decided to take the road of painting, drawing and sculpture, so as not to compete with our older brothers.
“When you’re in such a big family you try to find your own place to be creative and we choose art.”
Dermott adds: “Almost all of my art and much of Kevin’s is based on Paisley and the worthies we knew when we were growing up.
“This is our first joint exhibition and we hope that when people come along they bring their imagination with them and share some of the unexpected discoveries we have made while creating our art.”

Glasgow News? Daily Updates part of our network
What was the most visited holiday destination in Europe in 2016?

Paisley 2021 gets 2021st backer at music festival
Scroll to top