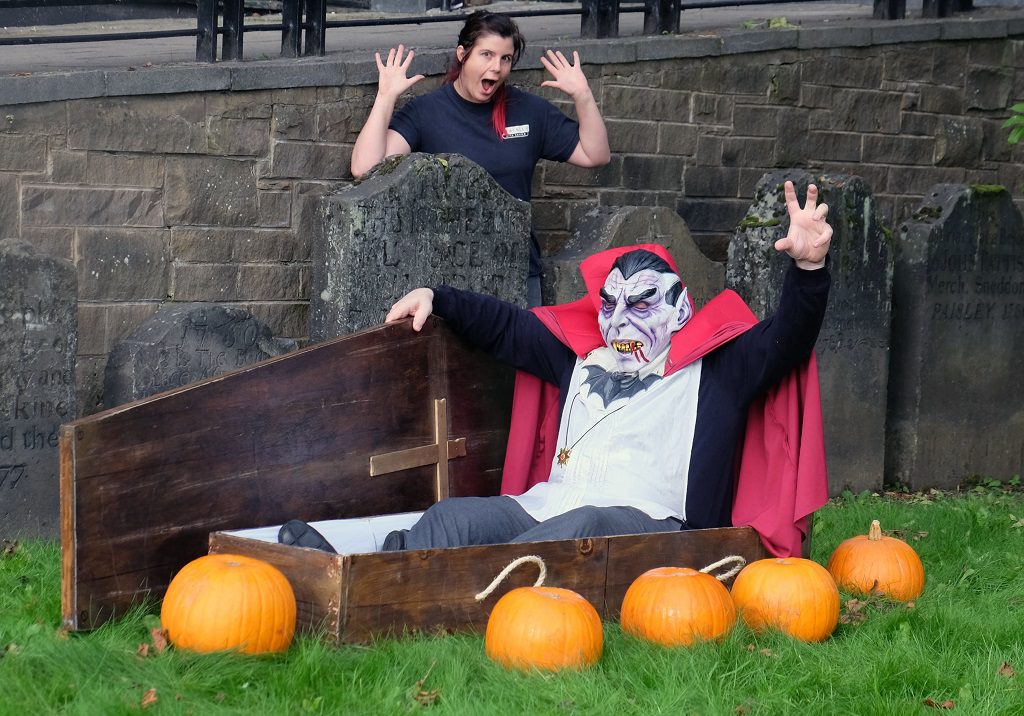 HALLOWEEN horror fans are being given the chance to take a selfie as they lie in a coffin at an ancient graveyard.

That’s the spooky experience on offer at Paisley Arts Centre as part of a Halloween Graveyard Tour, on Friday, October 28, as dusk falls at 5.30pm. The arts centre is in the converted Laigh Kirk – which was the second oldest church in Paisley when it opened in 1738 and had almost 70 graves in the church grounds. Paisley Arts Centre, in the town’s Witherspoon Street, opened in 1987 and visitors are intrigued by the unusual mort graves that look like table-tops they see close to the entrance.

The centre is now a popular venue with a diverse range of drama, dance, comedy, jazz, popular music and family events throughout the year.

In the run-up to Halloween, the grounds are being transformed into a pumpkin patch for the free graveside tour with pumpkin soup and Halloween cupcakes on sale in the arts centre café. And of course, the fang-tastic opportunity to pretend you are Dracula and rise out of the coffin, which will be placed among the gravestones.

The arts centre is run by Renfrewshire Leisure and its chief executive, Joyce McKellar said:
“We’re having a really spook-tacular event at Paisley Arts Centre in the run-up to Halloween this year and the Graveyard Tour will not only be educational, but fun as well.
“The grounds of the former Laigh Kirk can feel eerie, especially as darkness begins to fall – and that’s when we’ll be having the graveyard tour.
“It might even get a wee bit scary if visitors stumble on people lying in a coffin taking selfies!”

Contact Paisley Arts Centre on 0300 300 1210 for more information about the Halloween Graveyard Tour.