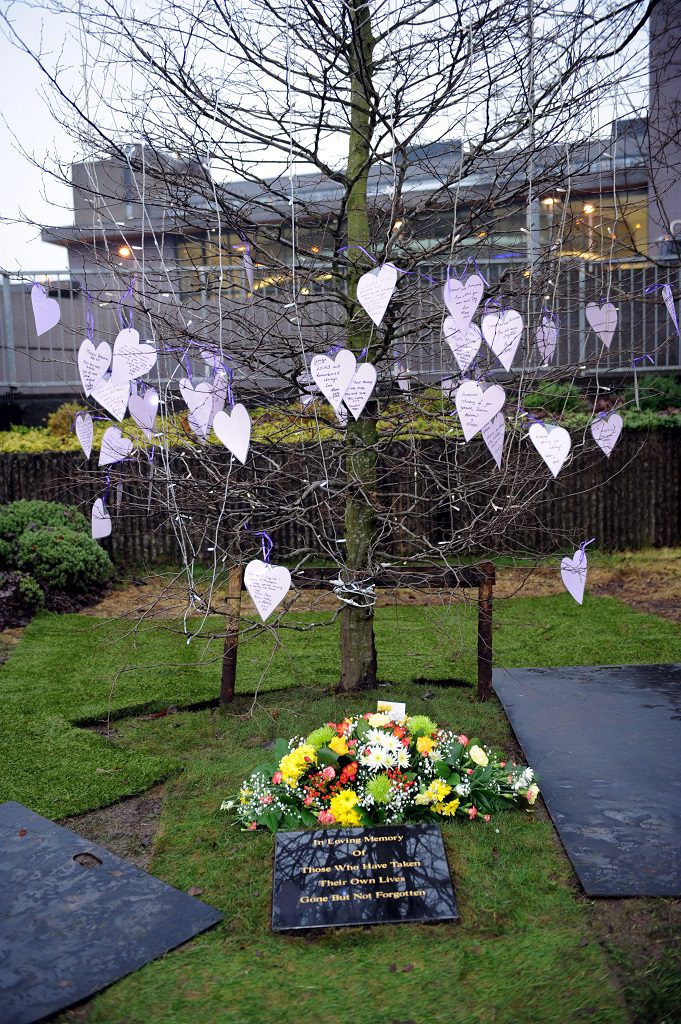 If you can read between the lines, you can save lives. That’s the message Choose Life is sending out to people in Renfrewshire to mark Suicide Prevention Week (5–11 September).

Memorial tree for those lost to suicide outside Renfrewshire House

Last year 21 people in Renfrewshire took their own lives, leaving a lasting impact on families, friends and communities.

Choose Life is tackling this through its ‘Read between the lines’ campaign, which calls on everyone to be alert to the warning signs of suicide in people close to them.

The message is that if you’re worried about someone, such as a friend, family member or workmate, asking them directly about their feelings can help to save their life.

The campaign acknowledges that signs of suicide can be ambiguous, but encourages people to take all signs of distress seriously, even if the person seems to be living a normal life. It also aims to assure people that asking a person about what’s troubling them can make a positive difference.

The campaign targets men and women who are likely to be in greatest contact with people most at risk of suicide – men aged 30-59, since statistics show that around three-quarters of suicides have been men in every year since 1990.

Raising awareness of suicide prevention and giving the public information is a vital part of the Choose Life work. A host of activities are taking place in Renfrewshire during Suicide Prevention Week, including the launch of the ‘Time to Listen’ film which sees national support groups, local community groups and members of the community speaking about suicide and its effects.

Councillor Iain McMillan, Convener of Renfrewshire Council’s Social Work, Health and Well-being Policy Board, said: “Suicide Prevention Week is a chance to highlight the part that suicide plays in people’s lives and educate people on the warning signs which they may notice in someone’s behaviour.

“Scotland’s suicide rate has been decreasing since 2002 with the latest figures showing that that they are at their lowest level since the 1970’s- but this is not enough.

“We must ensure that those who are dealing with suicidal thoughts are aware of the help that is on offer and make it as easy as possible for them to access these support channels.

“If we can show that there is always a better option, then these statistics should continue to fall year on year- until we achieve the ultimate goal of no one being lost to suicide.”

Lisa Aitken, Choose Life Co-ordinator, said: “You tend to know when someone close to you isn’t quite themselves. So if you notice any changes in their behaviour that worry you – even if the signs come and go – ask them about it.

“You’ll find that talking can help a person get clarity about what it is that’s troubling them, and often gives a sense of perspective. Starting a conversation is half the battle. You don’t need to have an answer to their problems – just be there for them, try to listen carefully without judging, and show that you care.”

For more information on suicide prevention, call 0141 849 2200, or email elizabeth.aitken@renfrewshire.gov.uk.

Glasgow News? Daily Updates part of our network
Paisley gets ready for a Spree for All