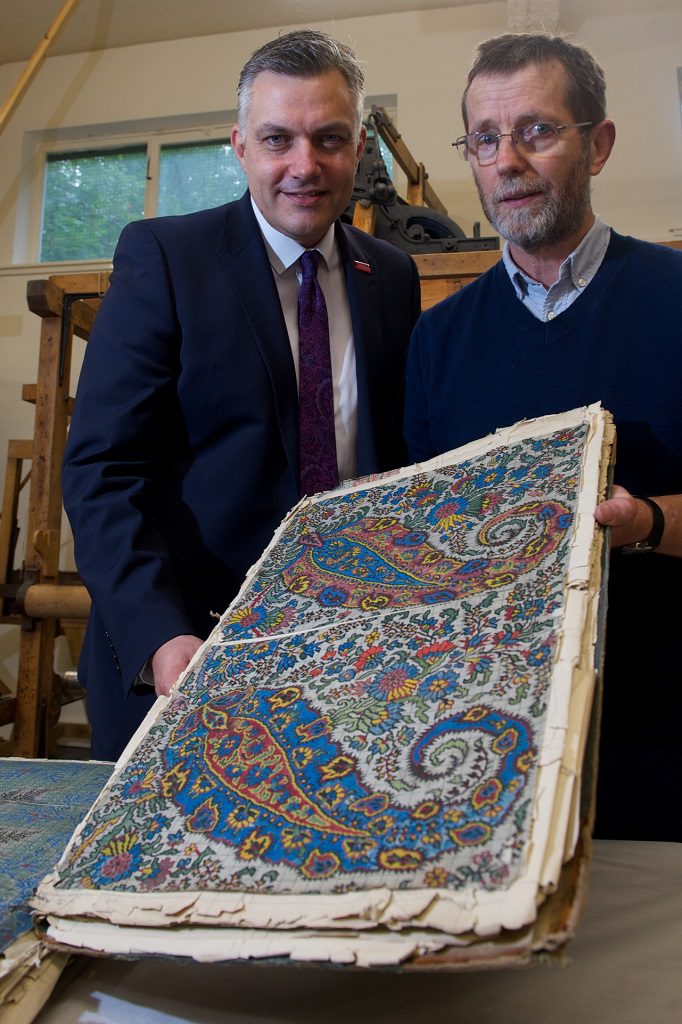 A collection of rare textiles, many not seen by the wider world for many decades, has been revealed at Paisley Museum to mark the launch of the PaisleyMake Festival of Creativity and Design (from Wednesday 31st August to Saturday 3rd September).

Paisley, hometown of the world famous Paisley Pattern and one-time centre of the global textile industry, opened up its museum archive to provide a glimpse of the renowned collection. Paisley Museum is the subject of ambitious £56.7m plans to turn it into an international-class visitor attraction and it is intended that the textiles collection become a key exhibit in the refurbished museum.

The plans for Paisley Museum and wider regeneration of the town centre form part of the Paisley’s bid to become UK City of Culture 2021. The bid aims to use Paisley’s internationally significant collection of heritage and cultural assets to transform the town and Renfrewshire’s future.

The town’s vibrant cultural scene is underlined by its hosting of the first PaisleyMake Festival of Creativity and Design. This four-day celebration of creativity welcomes makers and artisans from around the world to Paisley for a range of seminars and workshops in the town.

PaisleyMake aims to inspire designers to work with Paisley Pattern, engage people with the wider conversation around the commercialisation of the Paisley Pattern and reconnect it with the town and its people.

Hosted by Renfrewshire Council in partnership with Scotland Re:Designed, the festival showcases the depth of talent in Scottish fashion, textiles, accessories and interior design, all within the historic surroundings of  Paisley Abbey.

Full details of the PaisleyMake programme of events can be found at:  www.PaisleyMake.com

Renfrewshire Council Leader, Mark Macmillan, said: “We are proud to be bringing some of the most respected figures from Scotland’s creative and design communities to Paisley for the inaugural PaisleyMake festival. The town is a fitting host for such an event as there few places with the textiles tradition, heritage and talent as Paisley.

“That tradition continues today with the UK’s largest leather manufacturer, Scottish Leather Group, being based in Renfrewshire. The company plays an important role in the local economy and we are pleased to have their involvement in PaisleyMake too.

“Events such as this underline the vibrant cultural scene in Paisley and highlight the pedigree of the Paisley 2021 bid to become UK City of Culture which will benefit the whole of Renfrewshire.”

Paisley’s first ever yarn storming installation is also taking place as part of PaisleyMake. Local artist and businesswoman, Dyane Lanez, has wrapped the famous cloisters of Paisley Abbey in a selection of bright wool, inspired by the Paisley 2021 bid to become UK City of Culture. Members of the public are invited along to take part in a yarn storming workshop at Paisley Abbey between 1pm and 4pm, on Saturday 3rd September.

James Lang, Director of Scottish Leather Group, said: “We are excited to be involved with PaisleyMake and helping a new generation understand the potential for establishing new futures in the creative industries, including through our own Apprenticeship Academy.

“The inaugural PaisleyMake has an impressive programme of industry meetings, talks and public workshops. There has been much enthusiasm to take part and it’s great that more than 25 companies are backing the event with their involvement.

“As a Paisley maker born and bred, it has been fantastic to work with the teams at Scotland Re:Designed and Renfrewshire Council to make PaisleyMake happen.”

The Scottish leather group Apprenticeship Academy was launched in 2012 in partnership with Invest in Renfrewshire, Scottish Enterprise and West College Scotland. It offers two apprenticeship programmes; Engineering, and Leather Production and Manufacturing, with the aim of encouraging personal development throughout the entire Scottish Leather Group organisation.

Paisley’s bid for UK City of Culture 2021aims to transform the town and Renfrewshire’s future by using its unique cultural and heritage offering as the home of the Paisley Pattern and one-time centre of the global textile industry.

Anybody interested in arranging a viewing of the Paisley Pattern archive should contact Dr Dan Coughlan, Curator of Textiles at Paisley Museum, via  dan.coughlan@renfrewshire.gov.uk or on 0141 4618 5085

Paisley gets ready for a Spree for All
Scroll to top