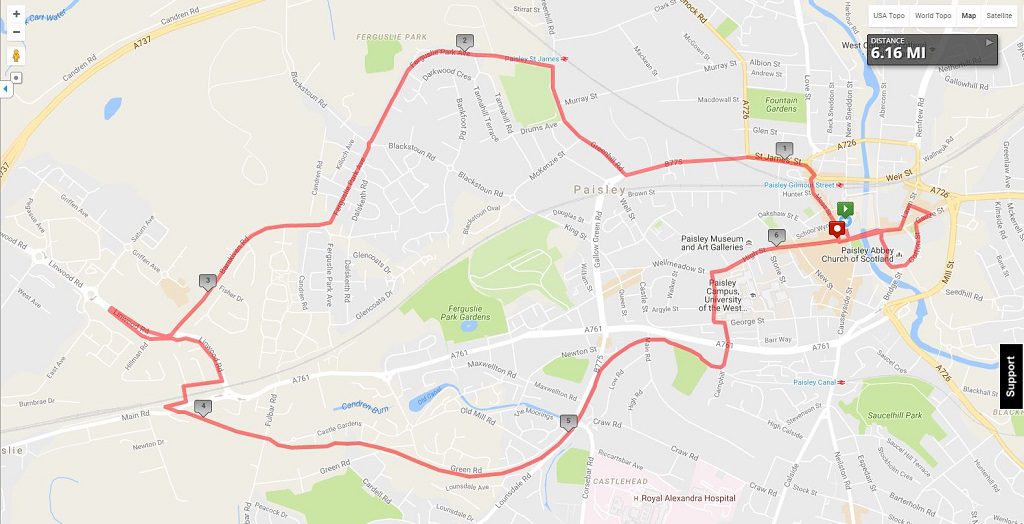 Paisley 10K Road Race with Fun Run 2016 takes place this Sunday (21st August) but if you’re not taking part in the run and have to travel by car, or use public transport you may want to know which roads are closed and where parking is suspended. We’ve compelled a list of closures and a map of the route.

Paisley.org.uk will be covering the Road Race on Sunday and remember to check back after the race for our photo coverage which is part of the Paisley 2021 Weekend (20-21 August).

Argyle Street, at its junction with Lady Lane

Blackstoun Road, at its western junction with the roundabout at Ferguslie Park Avenue

Canal Street, from Stow Brae to Main Road Castlehead, except for access to fire station and adjacent businesses

Causeyside Street, from Canal Street to St Mirren Street, except for access to Orchard Street

Craigielea Avenue, at its junction with Ferguslie Park Avenue

Drums Avenue, at its junction with Greenhill Road

Gilmour Street, from Central Road to High Street (except for taxis at taxi rank)

Greenhill Road, from Underwood Road to Ferguslie Park Avenue, except for access to premises

High Street,from Gauze Street at St James Bridge, to the East side of Townhead Terrace

Oakshaw Street East, from School Wynd to its western extremity

St Mirren Street, from Causeyside Street to The Cross

Underwood Road, from Well Street to Kerr Street, except for access to premises

Weighhouse Close, from New Street to its northern extremity

Three parking bays on the south side of George Street at West Buchanan Place will be suspended to allow the 10k to cross the road without obstruction.

Parking will also be suspended on the North side of George Street from Causeyside Street to Barr Place.

Traffic will be controlled by the police when necessary at Baronscourt Road junction with Linwood Road, between the approximate times of 10.15am and 10.45am hours, to avoid danger. The runners should keep to the footway on the north side of Baronscourt Road.

Access on all roads will be maintained for Emergency Services at all times.

Glasgow News? Daily Updates part of our network
Water way to have fun on the run

Renfrew, the Highlands and the Islands: connected through the clouds
Scroll to top
Go to mobile version