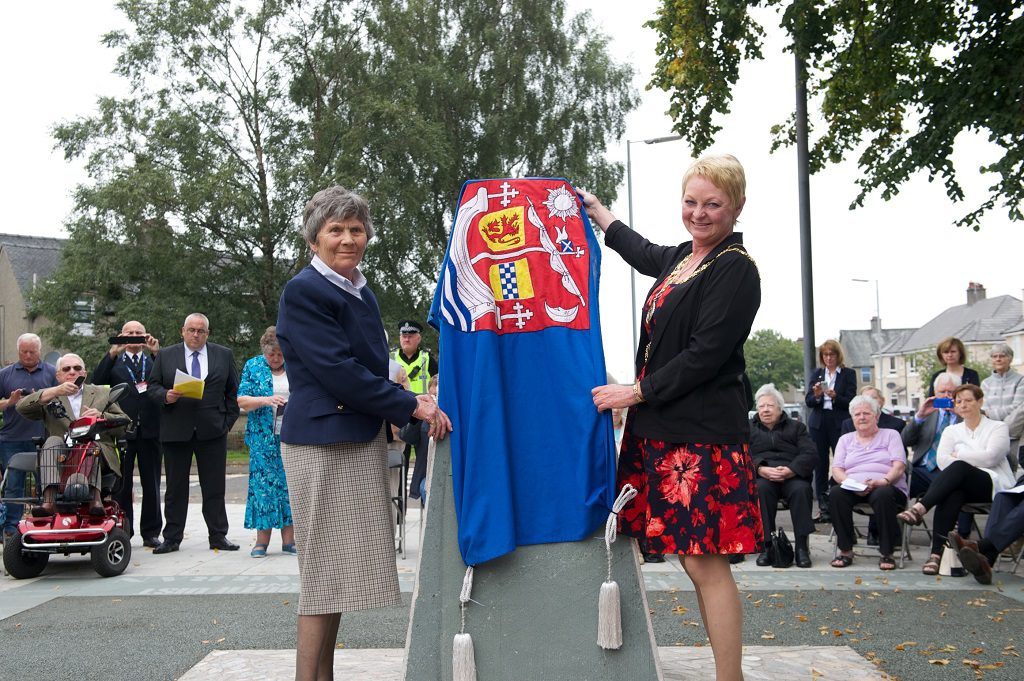 Renfrew’s historical link to the Scottish Air Ambulance Service (SAAS) has been strengthened with the restoration of a monument in the town. Until services transferred to Glasgow Airport in 1966, Renfrew provided a vital link to the Highlands and Islands transporting seriously ill patients to hospital in Glasgow- saving countless lives in the process.

Renfrewshire’s Provost Anne Hall was joined by Sheila Harper, daughter of Captain Barclay who unveiled the original monument in 1966, to reveal the newly renovated memorial at a special service in Renfrew.

Commissioner Keith Banks, Glasgow Airport Chaplain, led a ceremony to around 150 people- many of whom have direct connections with the Air Ambulance Service having served as nurses, been patients and even being born on board a flight- who were in attendance to see the restored monument being unveiled.

Housed at the corner of Newmains Road and Sandy Road, the project was undertaken by Renfrewshire Council who worked closely with the local community to organise the refurbishment of the memorial which had fallen into disrepair.

The cairn features stones from the many different islands in which the air ambulance served- including Islay, Skye and Benbecula among others- and the restoration work has ensured that these originals have remained in place.

The monument is in place as a tribute to the all men and women of the Scottish Air Ambulance Service who operated from Renfrew Airport and in special recognition of the sacrifice made by Captain T. M Calderwood, Radio Officer H. McGinlay and Nursing Sister J. Kennedy who lost their lives in service on 28 September 1957.

The first recorded flight in Scotland was from Renfrew to Islay on 14 May 1933 when pilot Jimmy Orrell flew to collect seriously ill fisherman John McDermid.

By coincidence Mrs Ferguson, a nurse from Glasgow, was on holiday in Islay at the time and offered to travel back with John to ensure his survival.

Thanks to both the skill of the pilot and medical attention of Nurse Ferguson, 90 minutes later John underwent a life saving operation at Glasgow’s Western Infirmary.

From this dramatic beginning in 1933, the SAAS came into being and connections between the town of Renfrew and some of Scotland’s most remote communities were forged.

Throughout the 1950’s public desire for foreign holidays grew rapidly and Renfrew Airport became too small to handle the extra demand.

On the 30th April 1966, all services transferred to what is now Glasgow Airport and the Scottish Ambulance Service continues to provide vital medical links for remote communities from the location today.

Renfrewshire’s Provost Anne Hall said: “I’m delighted to see the memorial has been given such a fantastic makeover through the hard work and dedication of those involved.

“The Scottish Air Ambulance Service is an important part of Renfrew’s history and has saved numerous lives across the years by providing such a vital service.

“While the airport in Renfrew may no longer be around, the memorial ensures that all who have been a part of the service, and who still are, are recognised appropriately.”

“The monument has been in need of restoration for a while now and I’m delighted that this is now in place for the people of Renfrew to enjoy.

“I would also like to recognise the hard work of Community Councillors Pat Watson and James Gamble in arranging today’s event.”

The restoration was supported by Renfrew Community Council and completed thanks to funding received from Renfrewshire Council, the Renfrew and Gallowhill Local Area Committee and the Glasgow Airport FlightPath Fund