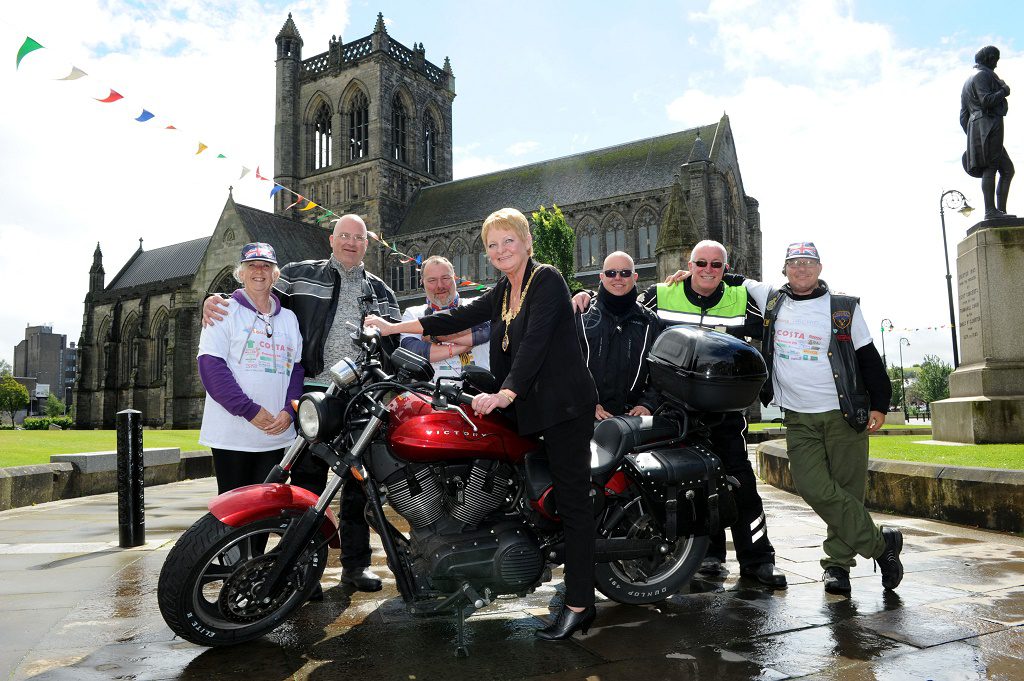 Renfrewshire’s Provost Anne Hall welcomed four daring bikers as they stopped off in Paisley on their 3000-mile journey around the coast of Britain. The riders refuelled with a light lunch at Paisley Town Hall as they geared up for the many thousands of miles they have in front of them. The BOB! Around Britain Challenge sees the team- consisting of four riders and two support crew in a van- take in landmarks such as John O’Groats and Land’s End as they aim to raise over £5000 for charity.

The challenge is in aid of two charities- 4Louis and Orchid- extremely close to their hearts having each been affected by the issues the charities tackle.

4Louis provide memory boxes for stillbirth, neo-natal, infant and child loss. Each memory box contains; a clay impression kit to capture an impression of babies hands and feet, two teddies- one for the baby and one for the family, a glass angel in a presentation box and an acknowledgement of life certificate plus much more.

Orchid exists to save men’s lives from testicular, prostate and penile cancers through pioneering research and promoting awareness. They provide support services and education and awareness campaigns ensuring men of all ages are well informed.

Organiser and rider, David Atkin said: “We formed BoB! Bless our B—s Around Britain Challenge in October 2015 to ride round Britain and raise as much money as possible for charity.

“This is one of the toughest, yet most exhilarating challenges of our lives as we know the money we raise will be used to help parents of Stillborn and Neonatal sleeping angels and raise awareness of Male Cancer throughout the UK.”

Provost Hall added: “As a keen fundraiser myself, I recognise the determination that these men have to make a difference.

“Their challenge is a test of physical and mental endurance and will raise a significant amount of money for two extremely worthy causes.

“I wish them the best of luck on the rest of their journey and thank them for visiting Paisley as part of their challenge.”

For more information or to donate to the challenge visit:  https://www.gofundme.com/roundbritain

You can track their journey via:  http://aroundbritainchallenge.co.uk/live-tracking/