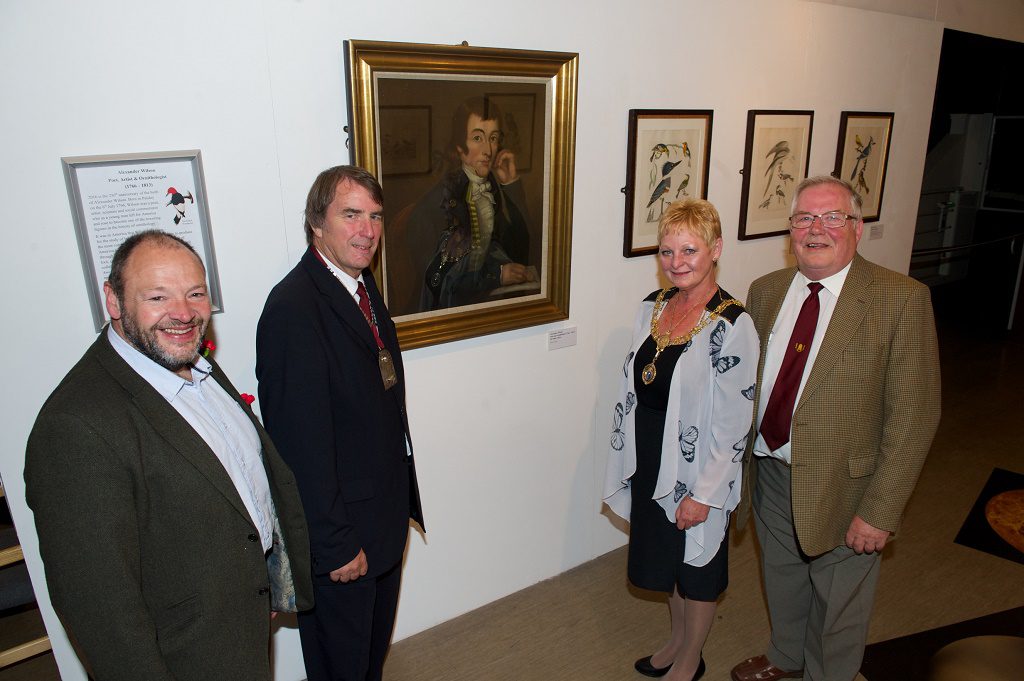 One of Paisley’s most renowned sons was remembered with a commemorative ceremony in the town, hosted by Renfrewshire’s Provost Anne Hall. To mark the 250th anniversary of Alexander Wilson’s birthday, the Provost accompanied a group of guests on a tour of the sites most associated with the famous poet and scientist- known as the Father of American Ornithology.

Led by Paisley historian, Les Fernie, the Provost and members of Tannahill-MacDonald Club and Paisley Burns Club began their tour at the statue of Wilson in Abbey Close. Here, a poem commemorating his life and achievements was read by Bob Carruth, President of Paisley Burns Club.

Plaque in commemoration of Alexander Wilson

The group then laid a wreath at the commemorative plaque for Wilson at the Hamills Waterfall before proceeding to Paisley Museum. Here, Les revealed details about the significance of the parrot which rests in the statue’s hand in Abbey Close.

The Provost formally opened a new public display dedicated to Wilson and his works which will remain open until 4 September.

Provost Anne Hall said: “It is incredible to think that 250 years after his birth in Paisley, Alexander Wilson is still celebrated here, and across the world. For a man from such humble beginnings, he went on to have a significant impact on society and the scientific community which can still be felt today.

“The Alexander Wilson story is just one thread of the rich tapestry of history and culture which runs throughout our town and supports our bid for Paisley’s bid for UK City of Culture. I encourage local people to visit the new display at Paisley Museum to learn about the town’s heritage and consider how it can help shape our future prospects.”

Born in Paisley on 6th July 1766, Wilson is perhaps best known for his work in documenting the bird species of the USA. This work only took place after he emigrated to the Americas in 1794, but he had already made his presence felt in his home town long before then.

Forced to become an apprentice weaver at an early age, after the death of his father, Wilson quickly came to realise the weavers of Renfrewshire were often exploited by their employers. Wilson put his thoughts on social injustice to paper, often in poems, and it was not long before he came to the attention of the authorities.

Arrested in 1794 and charged with distributing radical propaganda, Wilson decided to leave the country to avoid further conflict with the law. He arrived in Delaware on the east coast of the USA on 14th July 1794.

Despite having only five years of formal education and little disposable income, Wilson dedicated his time to travelling the States to document 268 species of birds, including 26 new to science. A keen artist, he also completed colour illustrations of each species which were the most anatomically accurate of the time.

Wilson’s work was published in nine volumes, across five years, but, unfortunately, he did not see the final two volumes published. He died in 1813 but his legacy lives on, not only in Paisley but in museums, universities and homes across the globe.