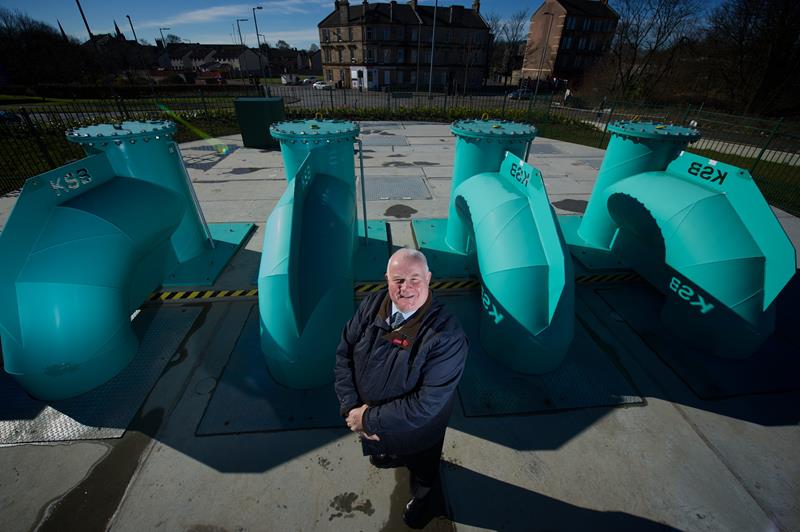 A new flood prevention scheme that will protect more than 300 homes and businesses in North Renfrew is now up and running. The embankment, which runs westward for 1km from Ferry Road, provides a barrier against direct flooding from the Clyde. The pumping station will ensure that tidal surges on the Clyde do not cause the Mill Burn to overflow and flood local properties.

The new scheme will see an end to periodic flooding which has required sandbagging of many homes and businesses in the area at least once a year. The combination of tidal surges and overflow from the burn has created flooding problems in the north end of Renfrew since the area was reclaimed from the river 300 years ago.

The investment will provide locals with protection against extreme once-in-200-years flooding events.

Speaking at the completion of the works, Councillor Eddie Devine, convener of Renfrewshire Council’s Environment policy Board, said:

“This new scheme will provide a high level of protection for homes and businesses in the north of Renfrew for the next 200 years.

“It will mean an end to residents’ worries and the considerable resources that have to be spent on sandbagging and clearing up the streets when flooding occurs.”

“As well as protecting families and homes, we hope that this new scheme will encourage businesses to invest in the local area.

“Along with the economic regeneration that will come with the planned Renfrew-Yoker bridge, Renfrew’s status as Scotland’s first town centre Simplified Planning Zone and the Airport Investment Zone, this scheme will boost business confidence in the town.”