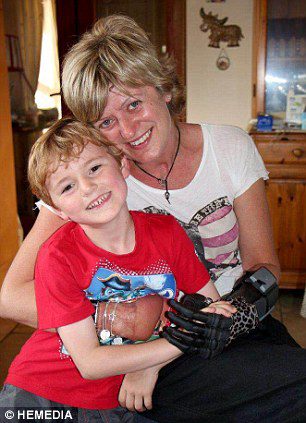 Lochwinnoch resident Corinne Hutton has been granted the Honorary Freedom of Renfrewshire.

Councillors unanimously backed a motion by Provost Anne Hall and Councillor Brian Lawson to make Corinne the fourth recipient of the award. The other recipients have been sculptor Sandy Stoddart; Tony Lawler, known for his community involvement and for being the Charleston Drummer in Paisley’s annual Sma’ Shot Parade, and the Argyll and Sutherland Highlanders, 5th Battalion, The Royal Regiment of Scotland.

Corinne has been honoured for her charity work which has continued despite a life-changing illness in 2013. Having suffered acute pneumonia and septicaemia, surgeons were forced to amputate her hands and legs below the knee.

Corinne responded by establishing a charity, Finding Your Feet, which offers practical, emotional and financial support to individuals and families who have suffered limb loss or life-changing physical trauma.

Her courage and determination has helped her raise over £200,000 achieved through the likes of completing a gruelling 5km assault course, becoming the first quadruple amputee in history to climb Ben Nevis, and breaking a record by abseiling 140 feet.

Celebrities and sports stars including Andy Murray, Mel Gibson and Gerard Butler have given their backing to Corinne’s outstanding effort to help others.

Provost Hall said: “Corinne Hutton’s attitude and achievements are an inspiration to everyone who meets her.

“Even before her illness, Corinne worked hard to support charities. To continue and develop that involvement to help others in the same circumstances given all she has been through is typical of her character.”

Councillor Brian Lawson said: “It is entirely fitting that the community which has been helped so much by Corinne has shown its appreciation for all she has achieved.”

Glasgow News? Daily Updates part of our network
Fair Trade up for discussion