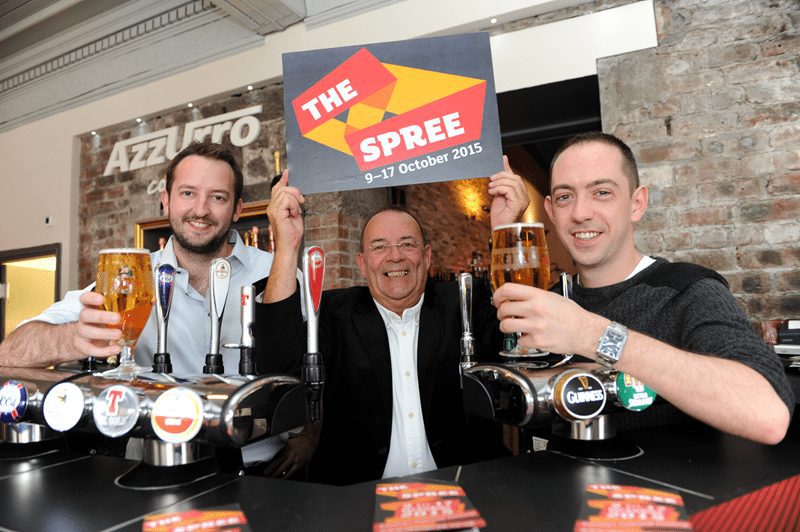 Visitors to this year’s Spree festival will be able to enjoy a food and drink bonanza after a local firm signed up as event sponsors.

Saporito – which runs two venues in the town centre – has teamed up with Italian brewing giant Birra Moretti to sponsor this year’s Spree, on between 9 and 17 October.

The nine-day event will see a top-notch bill of music, comedy and much more at various venues across the town, including a specially-erected Spiegeltent in County Square. And this year’s event will carry an extra flavour with Saporito running three pop-up bars in the town centre during the festival week.

Beside that will be the Azzurro Street Cafe selling Italian coffee, cakes and crepes.

Saporito will also operate the bar within The Spiegeltent itself, as well as a beer tent in Abbey Close on Friday 16 October, when the festival’s headline show – a sold-out collaboration between Idlewild and the RSNO takes place in Paisley Abbey.

The Spree festival – now in its fourth year – is run by Renfrewshire Council and is taking place as part of the build-up to Paisley’s bid for UK City of Culture 2021.

Councillor Glen said: “The Spree festival is now in its fourth year and has grown in size to become one of the key events in the area’s cultural calendar.

“As the town moves towards its bid for UK City of Culture 2021, events like this will help cement Paisley’s status as a key destination on Scotland’s event map even further.

“I would like to thank everyone at Saporito for their sponsorship and I am sure the various activities they have planned will help create a real festival vibe in the town centre this October.”

As well as the wine bar – which opened earlier this year – Saporito also runs a cafe in Gauze Street.

Owner Craig added: “One of the main things we want to do as a business is to promote Paisley – and that is why we were keen to get involved with The Spree, which is a great event to have here in the town.”

There will also be a full week of children’s shows (many of them free) taking place during the October school holidays.

Tickets are selling well, with two shows already sold out – to see the full bill and buy tickets, see www.thespree.co.uk