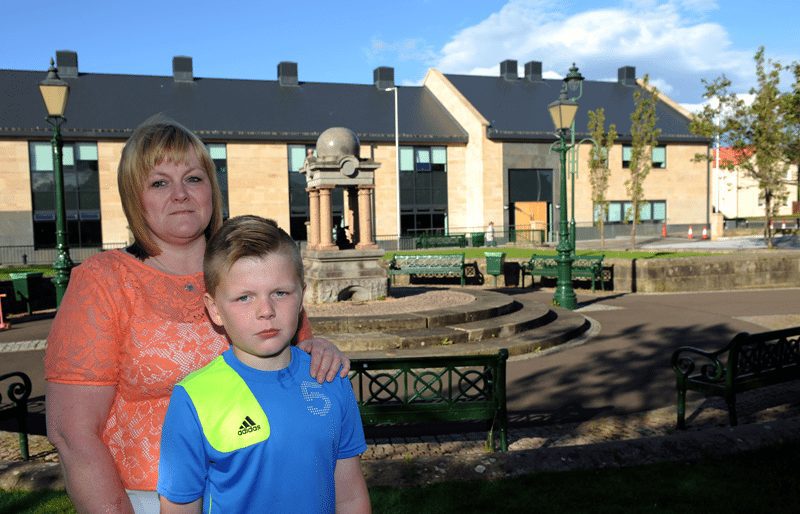 Bereaved Johnstone mum Kate Sharkey is forging ahead with plans to create a special memorial space in the town.

Kate aims to set up a memorial plaque on the square behind Johnstone Town Hall where loved ones could come to pay respect and to remember those who have lost their lives to suicide. Almost four years ago, Kate started going to local support group Survivors of Bereavement by Suicide (SOBS) after she lost her son Sean to suicide. Speaking to people who understood what she was going through has been a lifeline for Kate. Now, Kate wants to do something in her own community for others and decided to announce her plans during Suicide Prevention Week.

Kate said: “Going along to the SOBS support group felt daunting at first, but their support really helped me after Sean passed. Life is I knew it will never be the same again, but I find comfort in talking with others who have been through it too.

“I remember hearing that the second year is the hardest and I thought ‘I don’t see how that is possible’, but it really is true. Having my family and friends that I can talk to as well as a support group like SOBS has really helped. “Talking about suicide openly has been a big help to me. Through talking about suicide and attending SOBS I became involved with the ‘No Substitute for Life‘ Memorial Football Tournament that takes place in Ferguslie Park in June. I have been part of the organising committee for the past four years however I want to create a local memorial space for the people of Johnstone and surrounding areas, a space that people visit to remember their loved ones lost to suicide. The support I have been given to make this happen has been tremendous and I am hoping to have a memorial plaque set up later this year.

“Being open about what’s happened has meant that a lot of people approach me to talk about their experiences or their concerns about their own loved ones contemplating suicide, so it’s clear to me that talking about it really does save lives. There is no good time to talk about suicide, but I hope people feel they can start the conversation during Suicide Prevention Week.”

Provost Anne Hall, who attends the annual SOBS memorial service every January at Renfrewshire Council HQ in Paisley, said: “Having a place to reflect on the memories of loved ones who have lost their lives to suicide is important and I fully support Kate in her plans to create a local memorial in Johnstone.”

You can also get more information at www.suicide-prevention.org.uk

If you are feeling suicidal, the best thing is to talk. Speak to someone you can trust or call a helpline.

Breathing Space can be reached on 0800 83 85 87. Breathing Space is a free and confidential phoneline service for anyone in Scotland who is experiencing low mood or depression and needs someone to talk to. Trained specialist advisors will listen to your problems and offer advice, guidance and support underpinned by empathy, warmth and understanding.

The number for The Samaritans is 08457 90 90 90. Samaritans is a confidential emotional support service available across the UK and Republic of Ireland. The service is available 24 hours a day for anyone who is struggling to cope. You can talk to Samaritans about whatever you are going through. Samaritans volunteers offer support via phone call, text, email and letters.

RAMH First Crisis can be contacted on 0141 848 9090. They provide an out of hours service with short term confidential and support service to anyone (16 – 65 years old) experiencing a crisis in their mental health in Renfrewshire.