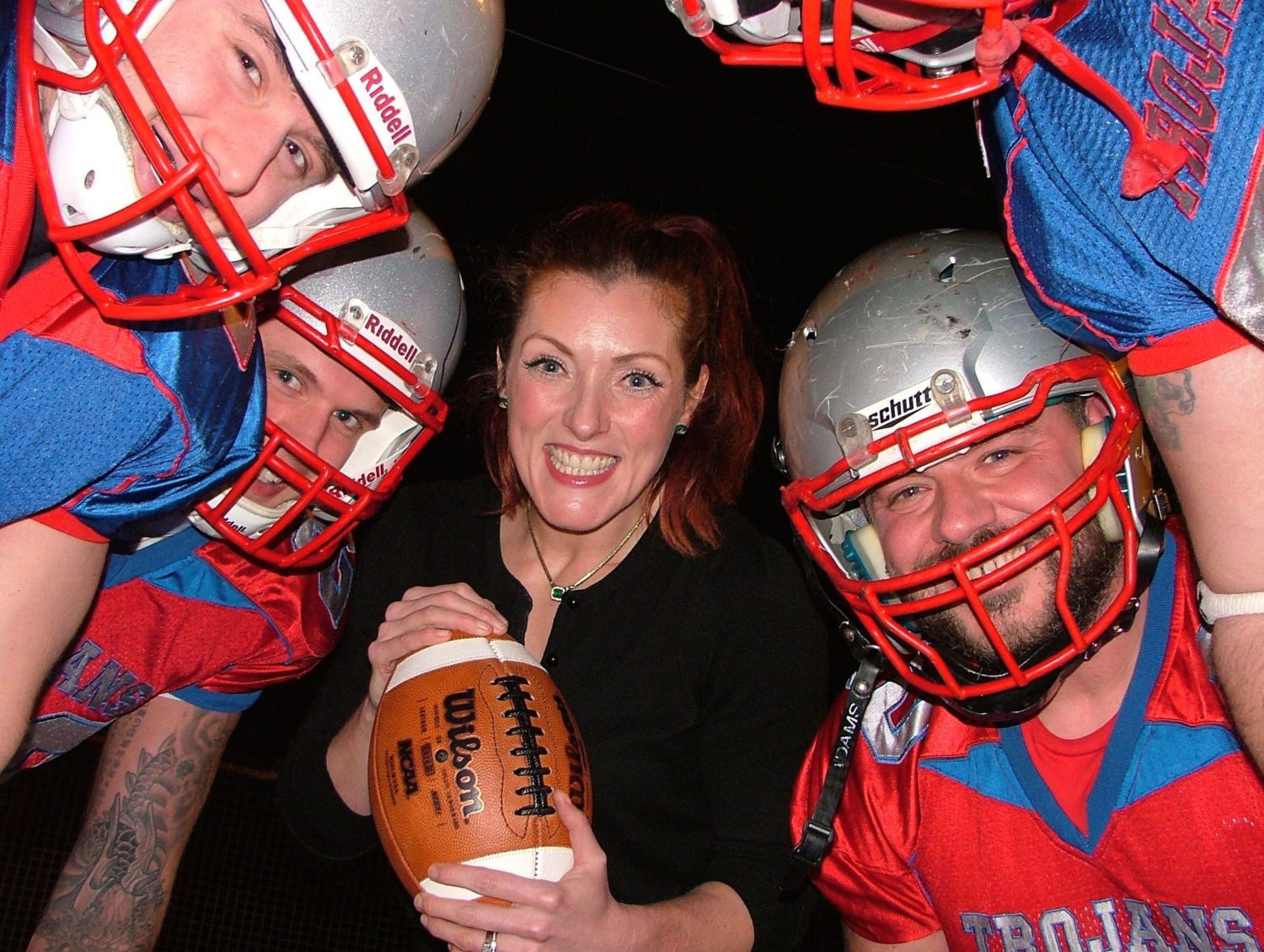 American footballers are celebrating their latest home win after bagging a new sponsorship deal with Pro-Life and Five on 5 in Paisley.

The West Coast Trojans, who boast a squad which includes amateur players from all over Renfrewshire, believe the partnership will make it easier for them to train and recruit new talent to the sport.

Trojans Head Coach Gary McNey said: “It’s great to have Pro-Life on board for another year. They are giving us a new set of game jerseys and a deal which is worth thousands of pounds to us and we can’t thank them enough.

“The squad also get to use the gym and pitches and family and friends get special rates too.
“We know the gym is now being run by Renfrewshire Sports Charity and we’re delighted they saw fit to back us.

“The staff are unbelievable. They are happy to help us with specialised training, workouts and nutrition advice to make sure we’re getting the best expert help around. Nothing is too much trouble for any of them.

“With Five on 5 on board too we have a solid base to recruit and run our pre-season training. As well as training there twice a week when the weather ain’t that great it’s also a great venue for any events we wish to run including the 2015 Superbowl. Everyone has been awesome.”

Gary, who founded the Trojans in 2004 and is still playing at 47 after 29 years in the game, added: “One side of my family are from Salt Village, Illinois so there’s always been a keen interest in American Football in my house.

“I go over to the States at least once a year and I’m still on a mission to get more people over here interested in taking up the sport.

“Our training sessions are open for anyone to come along, have a chat about how you can become a player, and to see what training is like and what’s expected. People have this image that you have to be huge and built like a tank – you don’t.
“We have big guys like Paddy Shields who is 6ft 5ins and 21 stone and smaller guys like Joshua Polson who is 5ft 10 and 15 stone and fast. You need power and strength but also speed in your team.”
Training is intense both indoors and outdoors and the squad is involved in sprint training, plyometrics exercises – a technique that uses explosive movements like jump squats or one-leg hops with some moves faster than others.
Every time players land from a jump their muscles get a stretch which gives their next jump even more power. The combination of stretching and contracting muscles whips them into shape.
Gary, from Erskine, who was signed to Rangers in his younger days, explained: “This workout uses maximum power to strengthen your muscles. The moves are quick and explosive, so you have to prepare to use a lot more energy than you do in a typical strength-training session.

“Our taster sessions are a great way to find out if the sport is for you. You need to have some level of fitness and a determination to increase that level with a regime of training which includes lifts, sprints, weights, strength training and speed training,

“There’s also the one on one, two on two and three on three contact training, throwing and catching a football and a whole lot more. We have players ranging in age from 18 to our oldest Stewart Caldwell, or Soggy as we call him who is 48 and a great-grandfather. So there’s no age limit.”

The dad-of-four, a joiner who runs his own business when he’s not coaching, believes the sport will get bigger in this country and people will open their eyes to the game he is passionate about.

For now he has his own personal challenge to face after winning a five-week training camp with former pro-Life gym owner Alex Whelan senior.

Gary said: “Although Alex has retired he still does personal training at the gym. Last time I had a stint with him it almost killed me. I’m dreading it but know I will appreciate how good I will feel after it.

He quipped: “I’ve just had a chicken may sandwich and I’m heading for a curry after training as it’s the last treat I will have for weeks. Diet and nutrition as well as a hard time in the gym under Alex’s watchful eye and tough regime are what’s ahead for me.

“I think I was lucky to win. I’ll let you know in five weeks.”

Anyone who would like to know what the Trojans are all about and when the next taster session is can give Gary a call on 07429 137969. Alternatively drop into one of their training session at Pro-Life on a Tuesday evening from 7.30pm.

The things a chief exec has to do –Gayle gets to find out what it is like in the huddle where players discuss strategy.

Gayle, chief executive of Renfrewshire Sports Charity, is driving the charity and one of its aims to encourage sport by backing the Trojans for another year.