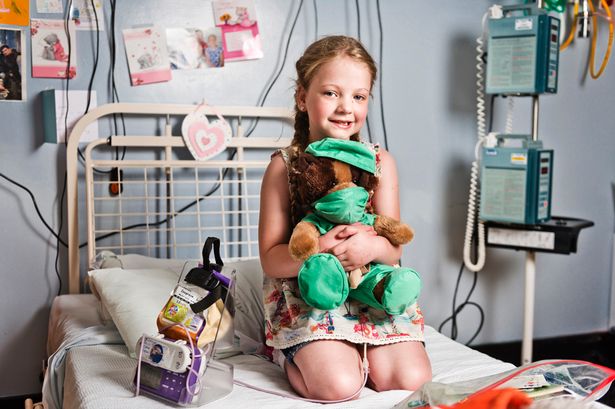 Lauren’s LifeLines was an idea that 8 year old Lauren Cosgrove, from Barrhead, came up with in order to help kids who rely on artificial nutrition, just like she does, via feeding tubes and central lines. Lauren was born at 27 weeks and has had to fight many different illnesses, including necrotising enterocolitis which is a disease that destroys her bowel and has had to have a stoma and colostomy bag fitted as a result. Her body is also unable to absorb nutrients and fats naturally and so she has to carry around a backpack with a machine inside which pumps special milk through a tube directly into her stomach, which she is on 24/7. She also has a central line where twice a week she has a 12 hour cycle where nutrients are delivered directly to her heart. The charity is run by her mum Laura Paterson but managed through Yorkhill Hospital where Lauren has sadly spent most of her life. As this is just a new charity set up, any kind of support and advertisement is greatly appreciated.

So far, we have had a very successful charity night held in the Gleniffer Hotel in Glenburn which raised a total of £8260 and we have a few different fundraising events coming up, including a football tournament where we are looking for some 5-a-side teams to join. The tournament is still in the early stages of planning but once we have a date and venue it would be great if some advertisement for teams, sponsors and general support could come from you.

We also have Lauren and her sister Erin cutting their long hair and donating it to children’s cancer charities to help make wigs for patients, 10k Bupa run, cycle around Millport and the continued “Tubie Challange” where people have been wearing backpacks for 24 hours with weights in to experience what it is like for a day to be Lauren, which we would also appreciate some advertisement and sponsors.

Our online sponsor page is http://uk.virginmoneygiving.com/team/laurencosgrove where we are collecting all sponsorship.

We would be very appreciative if you could help with sharing information/advertisement about Laurens LifeLines. We have had some amazing response so far from local people and businesses including Paisley Daily Express and St Mirren FC, where Lauren is a season ticket holder, and all the support we get will help to make such a difference to the charity and the kids who benefit from it.[/vc_column_text][vc_column_text]Image Courtesy of The Daily Record.

Glasgow News? Daily Updates part of our network
Employment in Scotland is at a record high