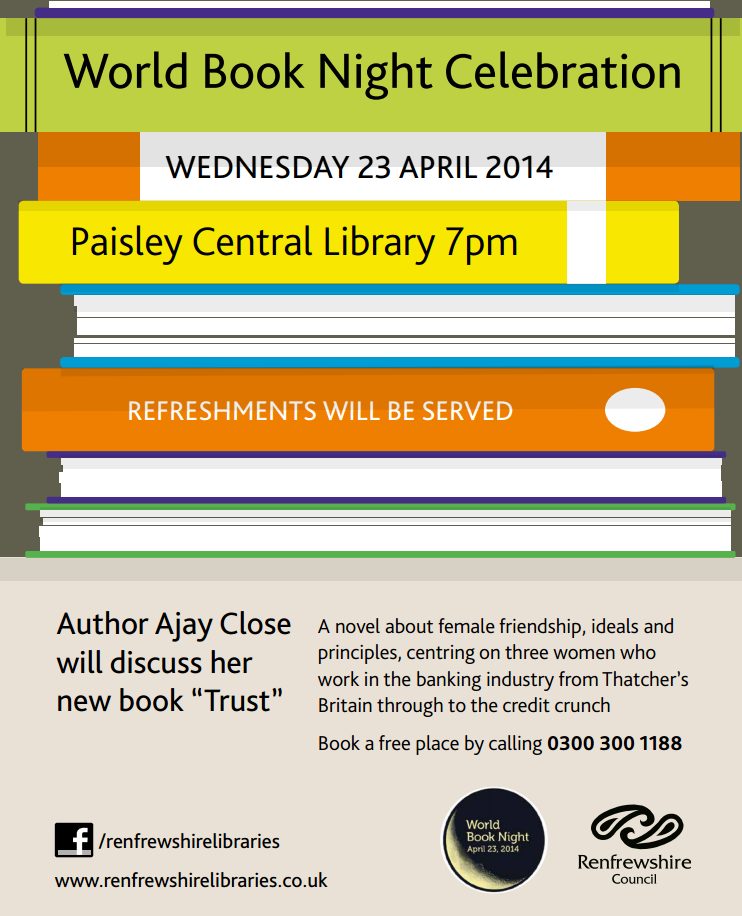 Ajay will be reading from and discussing Trust at Paisley Central Library on Wednesday April 23rd. She hopes the event will double as a reunion for all the local writers and readers, adults and young people she worked with between 1998 and 2001.

She was based mostly in Paisley and Johnstone libraries but also worked in schools across the county. “I made so many good friends. Some I’ve kept in touch with, but you can’t keep track of everybody. It would be wonderful to see some of the old faces at the library again,” she says. “I started writing Trust when I was writer-in-residence and Buddies will recognise some of the locations in the novel, so coming back to Paisley to read from the published book feels like closing the circle.”

A page-turning tale of love, money, friendship, corrupted ideals and second chances, Trust follows a set of characters over three decades from the Miners’ Strike to the aftermath of the banking crisis. The Scotsman called it a “rewarding read, a serious book for grown-ups who want the world taken not with a pinch of salt but something a little stronger“.

It’s a book that almost didn’t see the light of day. After an award-winning career in Scottish journalism, Ajay collected rave reviews for her debut novel, Official and Doubtful, which was longlisted for the Orange Prize. A second novel, Forspoken, came out in 1998, but she couldn’t find a publisher for her third book, and moved on to other projects. Her first play, The Keekin Gless, was staged by Perth Youth Theatre in 2009. In a Sma Room, a play with songs, toured east Scotland in 2012.

“I gave up on Trust ten years ago,” Ajay admits. “I’ve written three plays and two novels since then, but it was always at the back of my mind, and when the banking crisis broke in 2008 my agent persuaded me to rewrite it. Timing is everything in publishing. Eleven years ago no one wanted to look back at the 1980s. But with this year being the 30th anniversary of the miners’ strike, and feminism ‘having a moment’ again, suddenly the story is ultra-topical.”

Lexa, Gabriel and Rae meet in northern England in the 1980s, that polarised decade of strikes and deprivation, serious money and conspicuous consumption. When the merchant bank they work for brokers the sale of a privately-owned coal mine and its miners join the national strike, the women are caught between the sexual war of attrition waged by their macho colleagues and pitched battles on the miners’ picket-line.

Twenty-five years later the three women are living in Scotland, in a town called Gemmell, based on Paisley. When Gabriel is caught up in the global financial crisis, and a face from the past returns with shocking news. Lexa must deal with the fallout from the choices she made in her twenties. But do the people she wants to protect deserve her protection – and at what price?

“It’s not an autobiographical novel, but it draws on some of the things I saw working as a reporter covering the miners’ strike in Yorkshire in the mid-eighties, and the changes we’ve all experienced since,” Ajay says. “The power shift from manufacturing towns like Paisley, to the financial sector and bankers making inconceivable sums of money out of financial products they barely understand, never mind the rest of us.

“I grew up taking it for granted that the rich would take care of the poor. Now ‘socialist’ and ‘trade union’ are dirty words. I’m interested in the way these changes affect the way we feel about each other – and about ourselves. When you compare our experience, then and now, can you really say we’re the same people?”

Event programme revealed for summer and beyond
Scroll to top