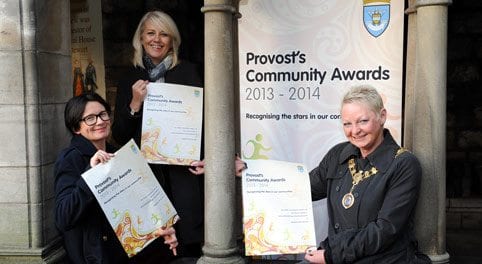 Winners of the Provost’s Community Awards celebrated at a special event held in their honour.

This year the awards have been revamped into five distinctive categories. Over 90 people and organisations were nominated for an award. The award winners, their families and the people who nominated them were invited to the ceremony, held in the Alexander Wilson Suite, Paisley Town Hall.

Provost Hall said, “It has been an honour to recognise such dedicated people in our community. All of the nominees for the awards contribute so much to the community and it has been a challenge to decide on the winners. I would like to say a big thank you to everyone who took the time to nominate a community hero.

“The five winners have been inspirational and I am honoured to be able to pay tribute to them for their hard work and dedication. The time they sacrifice to help others is truly remarkable and I have been humbled in listening to their inspiring and moving stories.”

After the awards ceremony, the Provost awarded the first Distinction Certificates to recognise the outstanding achievements and contributions of citizens and organisation in Renfrewshire.  The certificates were awarded to David Woodrow, Bishopton and Wilma Keenan, Johnstone. Two posthumous awards were given to relatives of Sam Coulter, Erskine and Mary McGettrick, Linwood.

The Provost’s chosen charities also received a donation from the monies raised at the Provost’s charity events throughout the year. A total of £5,200 was raised and each charity received £1,300.