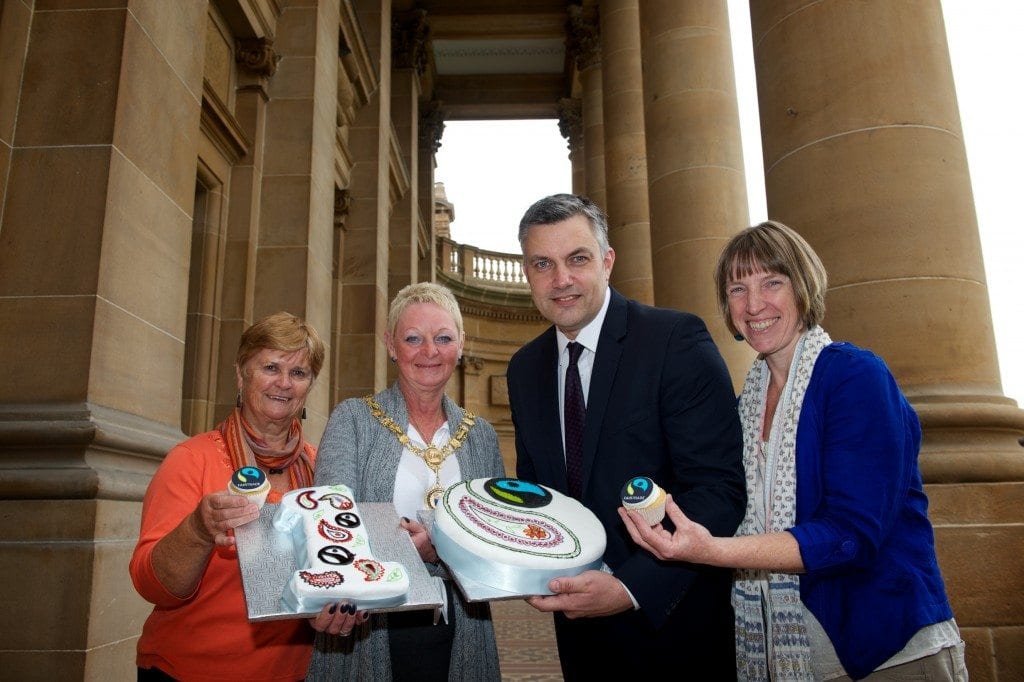 The people and organisations behind Paisley’s Fair Trade movement have gathered to celebrate the tenth anniversary of Paisley’s Fairtrade Town status.

The milestone was celebrated at Paisley Town Hall with a Fairtrade Afternoon Tea, organised by the Paisley Fairtrade Partnership – the group set up to develop and monitor Paisley’s status as a Fairtrade Town in partnership with Rainbow Turtle, Renfrewshire’s only dedicated Fair Trade shop.

A Fairtrade Town is a community in which people and organisations commit to using Fairtrade products as a way of improving the lives of farmers and producers in developing countries. Among the invited guests at event were representatives from the schools, local businesses and community groups who have championed awareness of Fairtrade in Paisley over the past ten years.

Maureen Brough, Chair of the Paisley Fairtrade Partnership said, “Reaching Fairtrade Town status is a shared achievement. So many people have played a part in Paisley’s Fairtrade story and this event is really about celebrating them.

“Our thanks go out to the schoolchildren, teachers, parents, volunteers, businesses, community groups and activists who have held cake sales, carol concerts, campaign days, cookery demonstrations, and hundreds of other events, to show their support for the campaign and encourage others to do the same. Their enthusiasm has been an inspiration over the years.”

The Fairtrade campaign makes it possible to transform the lives of others in poorer parts of the world just by making small changes to our daily habits, such as changing your regular brand of teabags to a Fairtrade version.

Speaking at the event, Renfrewshire Council Leader, Mark Macmillan said: “Over ten years ago, a small group of committed Fairtrade campaigners created a critical mass of energy and activity around Fairtrade which culminated in Paisley achieving its Fairtrade Town status. And from that, the momentum spread across Renfrewshire with more and more towns and villages, schools, and community groups getting involved.

“Within the council we try to do our best to support Fairtrade and communicate to staff, partners and the public the value and benefits so they can make informed choices. This has ranged from changing the coffee in our cafe to a Fairtrade brand, to working with our flagship employer MEPC to source Fairtrade cotton T-shirts for the Paisley 10k, and lobbying the national government on procurement issues.

“We will do all we can to support local groups, helping them to act on the issues that are important to them, and which need to matter to us because we, the council, have the ability to make a difference.”

Unveiled at the event was a photography exhibition that looks back at some of the people, organisations and events that have contributed to the first ten years of Paisley’s continuing Fairtrade campaign. In future months the public exhibition will tour Fairtrade outlets and points of interest in the town.

Guests were invited to participate in a commemorative photo and join in the customary cutting and sharing of a 10th anniversary birthday cake – made from Fairtrade ingredients.